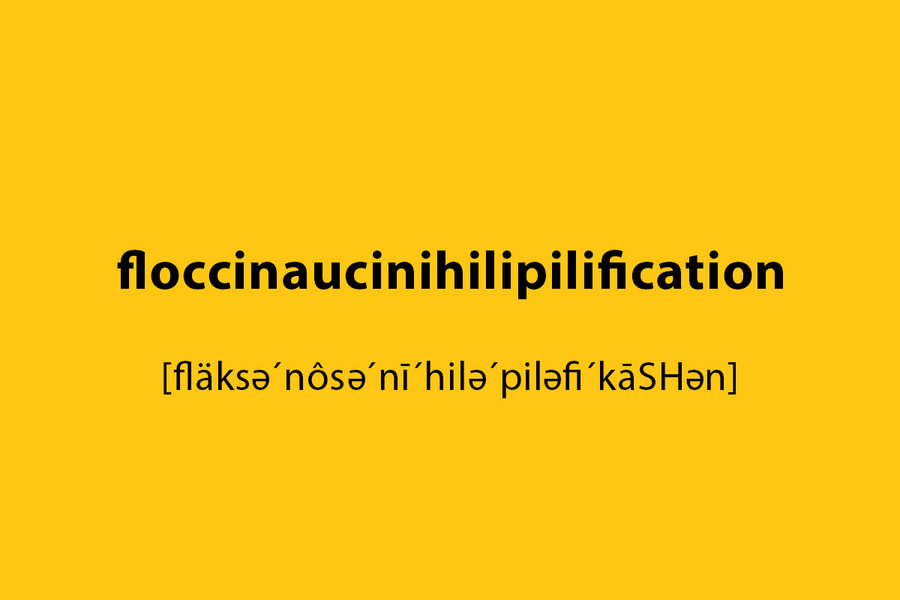 What is the longest word in the English language? This might seem like an easy question to answer: Look it up in the dictionary, or search online, and there you go. But in practice, experts disagree. What counts as a word? How frequently must a term be used?

If you’re looking for length, scientific nomenclature is a good place to begin. The chemical name of the protein titin, found in muscle tissue, begins methionylthreonylthreonyl… and goes on for another 189,794 letters, approximately as many characters as 70 pages of single-spaced text. This is the longest string of English letters that names a thing, but it’s not a word per se. It’s a formula that represents this protein’s chemical composition linguistically, rather than numerically or in a diagram.

Many writers have enjoyed coining long words, but these rarely gain traction in wider use. Aristophanes, the comic poet of ancient Greece, came up with a name for a stew made of fish, pigeons, and honey that has 182 letters when transliterated into English.

James Joyce made up ten 100- and 101-letter words to represent various sounds, including bababadalgharaghtakamminarronnkonnbronntonn
erronntuonnthunntrovarrhounawnskawntoohoohoordenenthurnuk, for the thunder that rang out when Adam fell from God’s grace. Although this is a very cool onomatopoeia – made up of words imitating the sounds “thunder” in different languages – it is not really a contender for the record either. No one uses it, except perhaps literary critics or students struggling through “Finnegans Wake.”

On the other hand, English speakers around the world are familiar with supercalifragilisticexpialidocious (34 letters). When it was first popularized in the 1964 film “Mary Poppins,” it was fun but meaningless and so it is still often left off lists of longest words. Merriam-Webster explains that it is in the running now, though: “the mouthful of nonsensical syllables certainly has brought cheer to audiences for decades. That cheer has inspired people to use it … for things that are extraordinarily good or wonderful,” a supercalifragilistic (for short) development!

Coming in at 29 letters, floccinaucinihilipilification – “the act of estimating something to be worthless” – is the longest word that invites no arguments. It’s in dictionaries, is occasionally used in public, and has a pedigree. It was coined in the 18th century by students at Eton, a boarding school in Britain, by linking four Latin words for “nothing.”

Except for methionyl… the words we’re talking about were all intentionally created to be long. What’s the longest in common use? How about smiles? As the joke goes, there’s a mile between the beginning and end of the word!