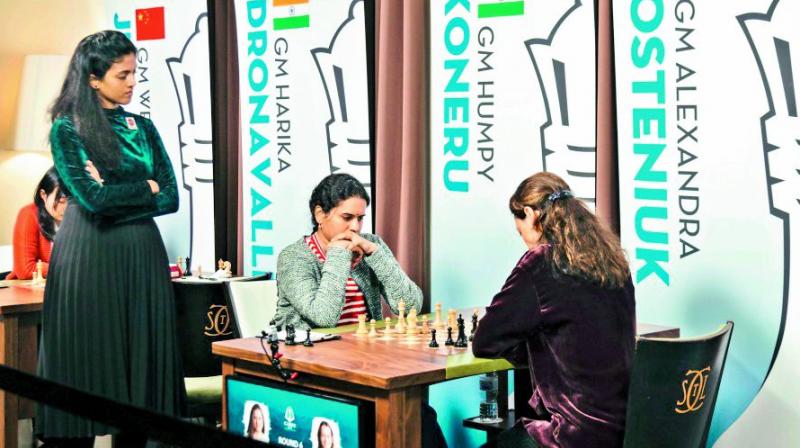 What happens when two friends compete against each other on a global stage? Ask those who watched Chess Grandmasters and childhood friends, Koneru Humpy and Dronavalli Harika, compete at the recently concluded Cairns Cup Chess Tournament — an elite level tournament for top female players from around the world, held at Saint Louis in the USA.

They played against each other in the last round of tournament, a game that ended in a draw. Humpy went on to win the championship and Harika finished fifth.

Friends and rivals
“We know each other well, so I wasn’t tensed,” says World Rapid Champion Humpy with a smile when asked about her reaction on knowing that she was to take on her friend. “It was a crucial match for me because I was leading the points table and marching towards clinching the title.”

Harika,who had been suffering from viral fever and was on antibiotics throughout the tournament, states she had seen it on the opponents list on the first day that the duo would play against each other in the last round. “So, also, we knew what was coming, and honestly, it was like any other day for me,” says Harika.

How does rivalry work between the two friends, we are curious. “Harika is a dear friend and we have mutual respect for each other, but on the board, she’s like any other opponent,” replies Humpy, who was crowned World Champion in the last week of December 2019.

Emphasising that both of them have different styles of play, Harika also attests to the healthy competition between them. “She’s World No. 2, and I am World No. 9. That also means we play the same tournaments mostly,” she tells us, adding that most of the times, the two are the only Indians in the competitions.

On and off court camaraderie
However, off court, both players are good friends, with Harika and Humpy spending time together when possible and looking out for each other. They especially bonded big time in the US, post the tournament, probably also because it’s always nice to have someone speaking the same language as you, they tell us in unison. “For the past two days, I have been with Humpy, meeting our childhood and close friends in the US and shopping,” reveals Harika. So what do the two women discuss when they meet? “Certainly not about the game, but we do talk a lot about the latest happenings,” explains Harika, adding that it’s their opposite personalities that make them good friends. Humpy reveals that Harika is a huge movie buff, who watches many movies and suggests some to her, too. Also, to Humpy, Harika’s supportive nature is what stands out to her. “She’s an all-rounder. She’s great in sports and can easily mingle with everyone,” she adds, claiming to be Harika’s opposite — more reserve. So while the world sees “Koneru Humpy vs Dronavalli Harika” on scoreboards and event boards, to Humpy and Harika, it’s just two friends competing against each other so that the better player wins.

19 tiny everyday things Covid has changed about our lives

Hypnotherapy, a real treatment for health

Five of the best beauty crackers this Christmas