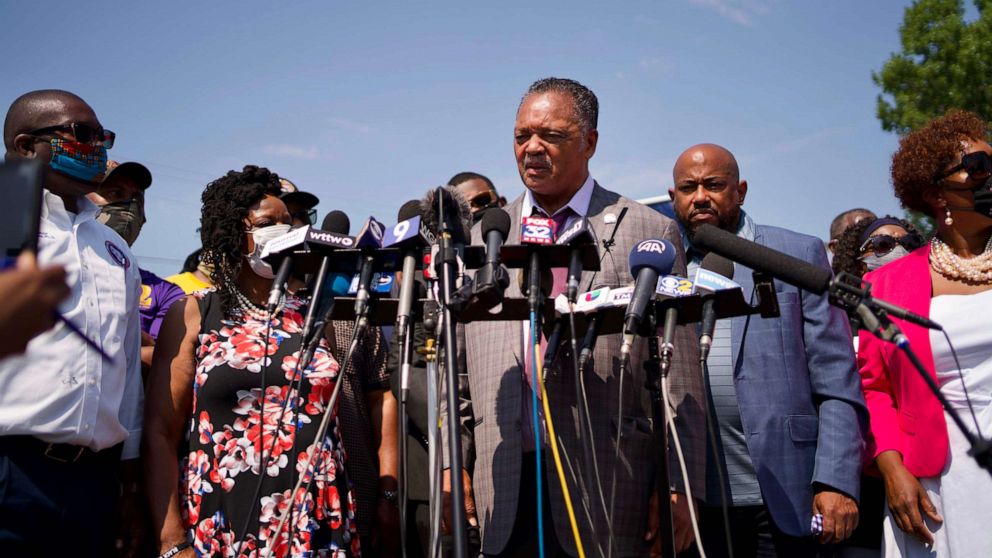 National civil rights leader Rev. Jesse Jackson is joining the family of Jacob Blake, a Black man shot multiple times in the back by a police officer, in calling for prosecutors to indict the officer and others involved in the incident that has sparked violent protests in Kenosha, Wisconsin.

During a news conference Thursday organized in Kenosha by local officials of the NAACP, the 78-year-old Jackson encouraged protesters to keep marching until justice is served and implored the white community and white churches to condemn Blake’s shooting and the fatal shootings that occurred at a protest this week in Kenosha.

“We’re going to march, were going to protest, nonviolent and disciplined and in big numbers, until these men are in jail,” Jackson said of the police officers involved in the incident in which Blake, 29, was shot.

Responding to a 17-year-old white suspect arrested in a shooting at a protest in Kenosha on Tuesday night that left two men dead and one wounded, Jackson said, “White citizens should not provide sanctuary for this kind of killing.”

“It’s not about black and white. It’s about wrong and right,” Jackson said.

On Wednesday night, the Wisconsin Department of Justice Division of Criminal Investigation, which is spearheading the probe of Blake’s shooting, identified the officer who shot the father of six as Rusten Sheskey, a seven-year member of the Kenosha Police Department. Officials said Sheskey is the only officer who fired his gun. The officials said Blake had a knife on him when he was shot.

A cellphone video of the shooting showed at least two other officers involved in the incident, in which a stun gun was also deployed on Blake. Those officers have not been identified.

Sheskey and other officers involved in the incident have been placed on administrative leave pending the results of the investigation.

Following three consecutive nights of destructive violence in Kenosha, calm appeared to return to the city as protesters took to the streets again Wednesday night to peacefully demand justice for Blake.

Police and 500 National Guard troops patrolled the city Wednesday night, monitoring a protest that went on well past a 7 p.m. curfew instituted by city leaders.

For the first night this week, police refrained from deploying tear gas and shooting rubber bullets at the crowd that appeared more subdued than on previous nights when multiple businesses were torched or looted.

“Crowds last night were small. There were a few hundred people and they walked peacefully through Kenosha and they did exactly what they wanted to do as far as the protest to make people know their concerns, but they did it without violence,” Sheriff David Beth of the Kenosha County Sheriff’s Department said at a news conference Thursday afternoon.

“I think the people that were here last night were Kenosha’s people,” Beth said. “We didn’t see streams of cars coming in from out of Kenosha County. A huge part of me thinks that a lot of our issues start when different people with different agendas come here to Kenosha.”

Kenosha Police Chief Daniel Miskinis thanked protesters for remaining peaceful on Wednesday night, saying, “The voices of those people is not falling on deaf ears.”

“We are hearing what has been said,” Miskinis said.

Kenosha Mayor John Antaramian said the city is in the process of establishing a number of committees to come up with ways to identify and eliminate systemic racism “and dealing with how we’re going to improve our community and give everyone a voice.”

The city leaders declined to discuss any development in the investigations of Blake’s shooting or the arrest of the teenager in the double homicide that occurred at Tuesday’s protest.

Wednesday’s peaceful protest march came a night after three people were shot, two fatally, during a chaotic demonstration. Investigators identified the white 17-year-old alleged gunman as Kyle Rittenhouse of Illinois, who authorities said was one of several armed vigilantes who came to the city from out of town to help protect businesses.

Rittenhouse was arrested when he surrendered to police in Antioch, Illinois, officials said. He is expected to be charged as an adult with at least one count of first-degree intentional murder, authorities said.

Attorney John Pierce of Los Angeles told ABC News that he has been retained to represent Rittenhouse.

“We will obtain justice for Kyle,” said Pierce, adding he was headed to Wisconsin Thursday night to meet with his client’s family and appear at Rittenhouse’s bail hearing on Friday.

Pierce said he has established legal defense fund for Rittenhouse through a Texas 501(c)(4) nonprofit called #FightBack Foundation Inc. that has been formed by him and Georgia attorney L. Lin Wood.

“That will be the sole authorized vehicle to fund Kyle’s defense,” Pierce said.

City officials and Blake’s mother pleaded for calm to be restored to the community, where merchants boarded windows after some businesses were burned to the ground earlier this week.

While calm appeared to be restored to Kenosha, violence reigned elsewhere.

In Oakland, California, a protest over Blake’s shooting turned destructive when police said a group of agitators among the peaceful demonstrators began breaking windows of business, shooting off fireworks, hurling objects at police and setting trash cans on fire while yelling “Burn it down,” San Francisco ABC station KGO reported. Police said multiple arrests were made.

In Minneapolis, where the wave of nationwide protests began in May with the death of George Floyd while in police custody, demonstrators took to the streets, some looting and vandalizing, after social media posts wrongly claimed officers fatally shot a Black man who police alleged died by suicide following his involvement in a homicide. Minneapolis police said that at least six people were arrested.