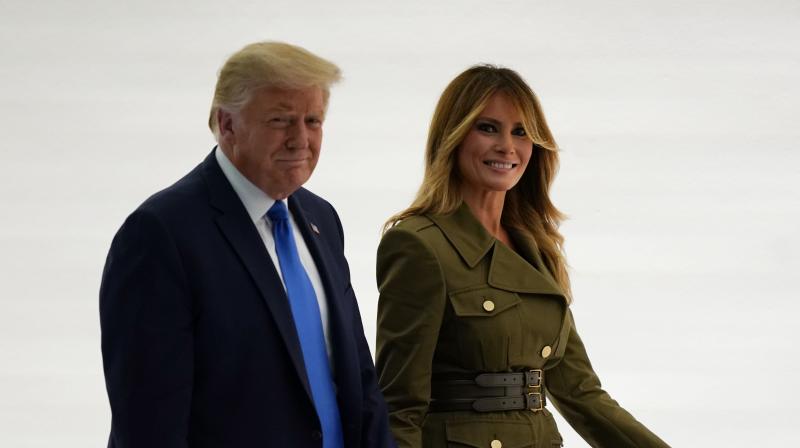 Washington: President Donald Trump kicked off his reelection campaign with a swaggering World Series ad that declared he's No Mr. Nice Guy, but his campaign has taken pains to highlight a softer side of the famously brusque and bombastic chief executive during this week's Republican convention.

The competing depictions of the president come after the Democrats spent last week showcasing the compassion of Joe Biden. But the attempt to humanize Trump was already in the works, part of a strategy to win back senior and suburban voters who have abandoned him in no small part due to his aggressive rhetoric and lack of obvious empathy during the coronavirus pandemic.

Republicans went all-out to depict a gentler Trump over the first two nights of their convention.

House Minority Whip Steve Scalise of Louisiana on Monday recalled how Trump sat by his hospital bedside as he recovered from a near-fatal gunshot wound in 2017. Rep. Jim Jordan of Ohio spoke of how Trump embraced his request two years ago to talk with relatives whose son had died in a car accident. The president was shown talking to COVID-19 first responders, thanking his friends for their service.

And Sen. Rand Paul on Tuesday revealed how the president supported his medical missions to perform emergency eye surgeries in Guatemala and Haiti.

Trump's tough-guy persona, built over half a lifetime in business, is well known.

He made millions telling people you're fired on The Apprentice and championed his hard-nosed business practices. Recognizing that it is an immutable part of Trump's image, his allies have long worked to hold it up as an asset, both in last October's splashy ad campaign as well as during the convention.

"Joe Biden is a very good guy. I know him. He's just as nice as they come," former U.N. Ambassador Nikki Haley said Tuesday on Fox. "But that's just the problem. We saw what happens when you try to be nice at the United Nations. Basically, everybody was running over America when Obama and Biden were in there."

Herschel Walker, the former NFL player, acknowledged in a convention speech Monday night that Some people don't like Trump's style." But he added: People on opposing teams didn't like it when I ran right over them either. But that's how you get the job done.

Walker acted as a pivot point in the Republican messaging, relaying a story of how Trump  in his business suit  once joined the ex-NFL star and their respective kids on a trip to Disney World.

Republican National Committee Chair Ronna McDaniel did much the same, offering testimony to Trump's toughness but also saying, I've seen private moments where he comforts Americans in times of pain and sadness.

Much of last week's Democratic National Convention was used to flesh out a portrait of Biden as a man who has suffered immense personal tragedy and can relate to others, including Americans who have lost jobs or loved ones during the pandemic.

Testimonials were offered about the pain he has suffered  his first wife and infant daughter died in a 1972 car crash; his son Beau died of cancer in 2015. And there was considerable talk about how he empathizes with others, including a 13-year-old New Hampshire boy who, like the former vice president, stuttered.

Trump aides privately concede that the Democrats told those stories well and that it accentuated their need to showcase some sense of empathy from Trump, who has previously struggled to publicly connect with victims of tragedies, including natural disasters and the pandemic.

Mark Meadows, the president's chief of staff, promised before the GOP convention began that the biggest surprises would be moments that showed a different side of President Trump that a lot of people don't really see. Trump aides noticed that within months of him taking office, he began losing the support of women, particularly those in the suburbs, who were turned off by some of his callous behavior and bellicose tweets.

That only accelerated this spring, after the pandemic arrived. Many suburban voters and some seniors were turned off by Trump's perceived lack of empathy for those touched by COVID-19 and those marching for racial justice after the death of George Floyd. Campaign surveys showed Trump trailed Biden badly in how voters perceived them relating to and understanding Americans' troubles.

Everybody in public life has a strength which exposes a weakness, said Ari Fleischer, who served as press secretary to former President George W. Bush. Trump's strength is that he's a tough guy. But it makes people wonder, is he so tough that he's not a caring guy, that he doesn't get it?

The new push to humanize Trump, like much of the GOP convention, is not aimed at winning over Biden supporters. Rather, it is an effort to win back some of the voters whose support Trump has lost, as well as to motivate non-voters to turn out for the president or stay home instead of casting ballots for Biden.

Democrats derided Trump's failure to recognize the presidency's duty to care," in the words of Biden spokesman Andrew Bates.