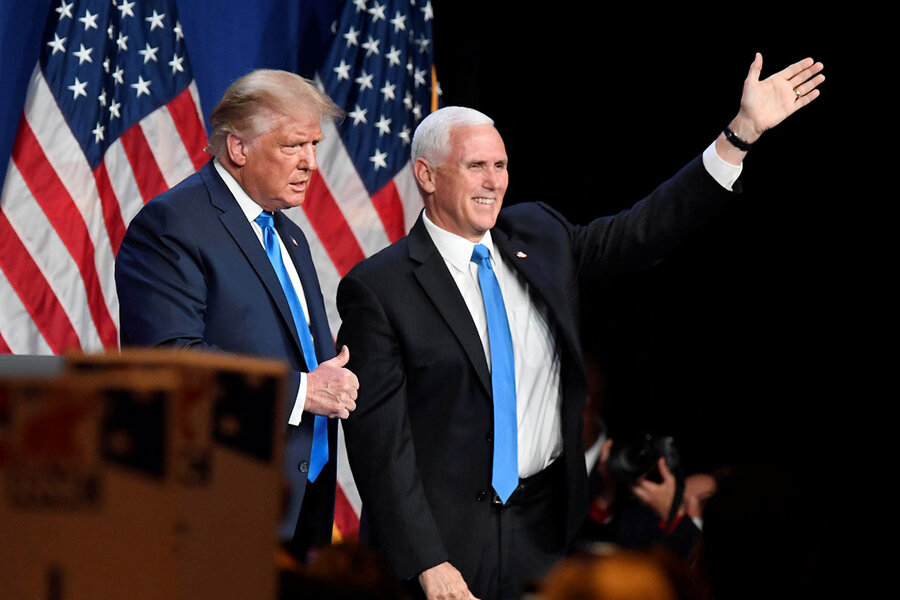 “Mike Pence has probably been the most consistent member of the Trump administration,” says Kurt Luidhardt, an Indiana-based Republican strategist who has worked in the same political circles as the former Indiana governor. “I think Pence will have earned the right, whether Trump wins or loses, to be a top candidate for president in 2024.”

An odd couple for the ages

Despite their differences, the Trump-Pence partnership made sense for both men in 2016.

Mr. Pence was in the middle of a tough reelection race that some pundits suspected he would lose. A place on the presidential ticket gave him the opportunity to boost his national profile while evading a loss that could end his political career.

Mr. Trump, for his part, had a relatively small pool of candidates to choose from, as many GOP officials had publicly criticized him. In Mr. Pence he found not only a willing partner, but someone who could help shore up white Evangelicals, a critical Republican voting bloc.

“Trump selected an evangelical vice president on purpose,” says Frances FitzGerald, author of “The Evangelicals: The Struggle to Shape America.” “He wanted to reassure them that even if he wasn’t going to church, his vice president was.”

Mr. Pence’s solid conservative credentials may also have sent a message of reassurance to Republican voters unsure about Mr. Trump’s ideological leanings. The vice president – who famously introduced himself at the 2016 Republican National Convention as “a Christian, a conservative, and a Republican, in that order” – had one of the most conservative voting records during his six terms in the U.S. House of Representatives.

Former Mississippi Rep. Gregg Harper, who served alongside Mr. Pence in the House, says he considered Mr. Pence his “bell cow” – a term for the lead cow of a herd that shows the others where to go.

“If I wanted to be sure I voted right, I’d look up at his vote,” says Mr. Harper. “I had that level of trust with him.”

The Trump-Pence relationship was tested almost immediately in the 2016 campaign, after an audiotape from “Access Hollywood” was leaked to the press in which Mr. Trump could be heard boasting in crude terms about his ability to force himself on women. Mr. Pence reportedly considered leaving the ticket, as a parade of Republican officials denounced their party’s nominee, who was down in the polls just weeks before the election. Yet in the end, Mr. Pence made the pivotal decision to stick by Mr. Trump.

Four years later, the president seems less in need of Mr. Pence’s political help with the base – having satisfied many conservatives with his record on everything from tax cuts to deregulation. For white Evangelicals, the president has “done everything he’s promised them, from Jerusalem to the Supreme Court,” notes Ms. FitzGerald, referring to Mr. Trump’s decision to move the U.S. Embassy in Israel to Jerusalem, a long-held conservative dream. She adds: “And you would not think this is true, but a lot of them like his style. … They like the idea of turning the world upside down.”

Yet while the president may not need Mr. Pence as much from a political standpoint, allies say he would be hard-pressed to find a more faithful governing partner. Much of the credit for the relationship, observers suggest, goes to the vice president – his willingness to toe the line, and cede the spotlight entirely to his boss.

“I’ve always found [Mr. Pence], personally, to be a really humble guy,” says Mr. Luidhardt. “Some people can’t handle being second in command, but I don’t think that’s ever been his problem.”

Loyalty taken to a new level

John Nance Garner, Franklin D. Roosevelt’s running mate on the 1932 Democratic ticket, described the vice presidency as “the spare tire on the automobile of government,” and, more famously, as “not worth a bucket of warm spit.”

Most vice presidents are loyal and supportive, says law professor Joel Goldstein. “But Vice President Pence,” he says, “seems to have taken it to a new level.”

Mr. Pence has maintained this steadfast posture in an administration marked by an unusual level of turmoil. Vice presidents often want to be “in the room where it happens, to borrow the line from ‘Hamilton,’” says Mr. Goldstein, author of the book “The White House Vice Presidency: The Path to Significance, Mondale to Biden.” But that’s much more difficult when policies are being made in late-night tweets, he notes. “And there are some times when you don’t want to be in the room.”

On the few occasions when Mr. Pence has even slightly diverged from the president, he’s done it in the mildest of ways. Ahead of the 2018 midterms, when Mr. Trump endorsed Alabama Senate candidate Roy Moore, despite allegations of sexual misconduct, Mr. Pence chose to stay silent on the issue. The vice president attended the funeral of Georgia Rep. John Lewis while Mr. Trump, who had feuded with the civil rights icon, skipped the event. Most recently, Mr. Pence called QAnon a “conspiracy theory,” while Mr. Trump has seemed to court QAnon believers.

Still, Mr. Pence waited to comment on the death of Mr. Lewis, whom he considered “a colleague and a friend,” until after the White House had issued its own statement. And last week, he claimed he “didn’t hear anything” about the president embracing QAnon.

Perhaps the most high-stakes example of Mr. Pence’s deft balancing act has been his leadership of the White House coronavirus task force, a politically risky role that his staff was reportedly hesitant for him to accept. Early on, the president took charge of the task force’s public briefings – which led to some politically damaging moments, such as when Mr. Trump suggested that an “injection inside” the body of disinfectants could be explored as a possible treatment for COVID-19.

After the president said that he was taking the malaria drug hydroxychloroquine to prevent COVID-19, Mr. Pence told reporters he would not follow suit, as his own physician had not recommended it for him. Still, he added: “I would never begrudge any American taking the advice of their physician.”

The vice president is frequently seen wearing a mask when out in public, while Mr. Trump initially refused to wear one and still rarely does. During a visit to the Mayo Clinic in May, Mr. Pence drew criticism for not wearing a face covering – a move for which he later publicly apologized.

His role on the coronavirus task force underscores the ways in which Mr. Pence could wind up taking on much of the baggage of Trump administration failures – especially if the U.S. continues to struggle to get the virus under control and Mr. Trump loses his bid for reelection.

“Because [Mr. Pence] has embraced this role as Trump’s champion so enthusiastically, it’s hard to see him as having a separate identity,” says Mr. Goldstein. “In 2024, a lot of people in the Republican Party who are going to run for president are going to attack Pence and say, ‘Why didn’t he do this or that with COVID-19?’”

In contrast to other recent vice presidents, Gallup found that just as many Americans have an unfavorable view of Mr. Pence as those with a favorable view, perhaps reflecting how much his identity is linked to Mr. Trump’s.

Still, a recent poll by Echelon Insights found that while a plurality of Republican voters – almost 30% – are unsure as to whom they will support in four years, Mr. Pence was the top choice for 26% of them (Donald Trump Jr. came in third, with 12%).

The vice president has traveled quite a bit on behalf of the Trump administration, even in the pandemic era. Following the conclusion of the Republican National Convention, he plans to travel to three Midwestern battleground states, visiting Michigan and Minnesota on Friday before delivering a commencement speech in Wisconsin on Saturday.

And while he may be campaigning in a Trump-Pence 2020 bus, the undercurrents of his own political ambitions are just beneath the surface. Mr. Pence may have said it best himself, during his first RNC speech back in 2016.

“Now, if you know anything about Hoosiers … we play to win,” said Mr. Pence to a cheering crowd in Cleveland. “That’s why I joined this campaign in a heartbeat.”