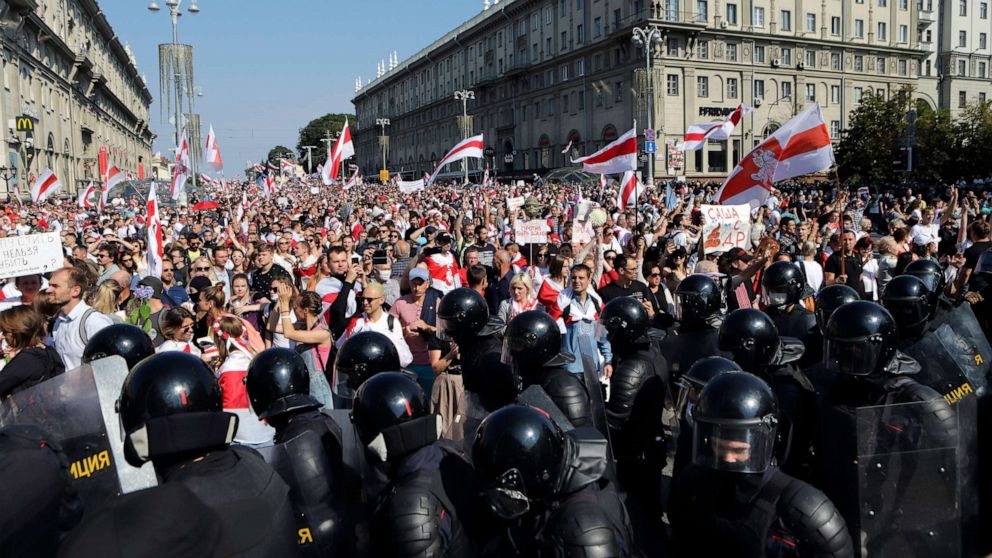 MINSK — Huge crowds of protesters flooded Belarus’ capital Minsk again on Sunday calling for President Alexander Lukashenko to step down, defying a heavy deployment of security forces and threats of a crackdown.

The protest appeared to be as large if not larger than the historic crowds that have filled Minsk the past two Sundays, the biggest in Belarus’ history and have numbered well over 100,000 people.

Hundreds of riot police and armored vehicles attempted to block protesters from reaching Minsk’s main Independence Square, the usual site of the protests. Masked officers with steel shields and trucks with water cannons moved up to block the long avenue leading to the square.

Protesters didn’t seek to push past the police, instead turning and marching through the city center out towards a complex that includes one of Lukashenko’s formal residences. Thousands more people demonstrated in a number of other cities and towns in Belarus, including Brest, Gomel and Vitebsk.

The demonstrators came out despite a week where authorities had increased efforts to stop the protests and amid a warning from Russia President Vladimir Putin that he might send Russian security forces into Belarus if there is a violent attempt to topple Lukashenko.

Sunday’s protests, like the previous weekends, were determinedly peaceful. There was a carnival atmosphere with people wearing costumes and carrying joke signs mocking Lukashenko. Sunday was Lukashenko’s birthday and protesters themed the demonstration as a party for the 66-year-old leader, with some carrying “presents” for him that they dumped in front of a police line outside the residence. Some protesters chanted “Happy Birthday” and one group brought a giant model of mustachioed cockroach that they laid down in front of riot police.

In Minsk, hundreds of troops in camouflage were gathered in side streets around the city center, as well as dozens of riot vans and army trucks. Masked troops stood with guns behind bails of razor wire blocking access to a war monument that had been a key site for the protests. Later in the day, videos appeared on social media showing military armored personnel carriers and anti-infantry vehicles moving into Minsk, seeming to drive towards the Palace of Independence, where one of Lukashenko’s formal residences is located. On Sunday evening, ABC News saw some of the APCs parked inside the complex.

Despite the intimidating security, authorities did not move to violently disperse the crowds and the protesters peacefully left by mid-evening. Belarus’ interior ministry said it had arrested at least 140 people during the protests.

Lukashenko, who last week appeared in front of cameras brandishing an assault rifle, on Sunday did not make an appearance. His press service handed out a photo it said was from the afternoon showing Lukashenko again walking around the Palace of Independence carrying an assault rifle.

The protest underlined the continuing huge opposition to Lukashenko that has ballooned since the contested election on Aug. 9 and the crackdown that followed it. The Sunday protests have become the focal point for that opposition; during the week, demonstrations are much smaller and authorities have used the pauses to ratchet up pressure, detaining dozens of people. This week they jailed two opposition leaders for 10 days and ahead of Sunday the foreign ministry revoked press accreditation for many journalists working for foreign media organizations in an apparent attempt to hinder coverage.

Kristina, a young protester, told ABC News that the Sunday protests helped revive her belief in the demonstrations.

“I feel great today. We don’t give up, we’re still here and we’re going to fight again and again in our peaceful way,” she said.

But the scenes on Sunday of the vast crowd of celebratory protesters flowing past the unmoving lines of masked troops and police also seemed to embody the current stalemate in Belarus. Despite the massive peaceful opposition, so far no cracks appeared in the security forces or the elite around Lukashenko and it’s unclear how the protests might force him to step down.

Opposition leaders have sought to put forward plans to increase the pressure on Lukashenko, suggesting last week that people begin a process of recalling their MPs from parliament. There have also been calls for economic boycotts and protesters are still pushing for strikes that early on rocked the government.

The protests are still largely leaderless and those leaders that have emerged are still mostly seen as figureheads. Lukashenko’s main rival in the election, Svetlana Tikhanovskaya, remains in Lithuania where she was forced to flee

Another leader, Maria Kolesnikova — the only one of the three key female leaders still in Belarus — on Sunday marched with the demonstrators. Kolesnikova told ABC News that the opposition would continue not just the demonstrations but other types of protests in order win.

Denis Kitin, 32, an ornithologist, said the protesters did not want to fight with the police and that he hoped Lukashenko would take a message from the scale of the demonstration.

“I hope he understands what it means why this 100,000 people came from all over the country,” Kitin said. “The people of Belarus just want to be free.”