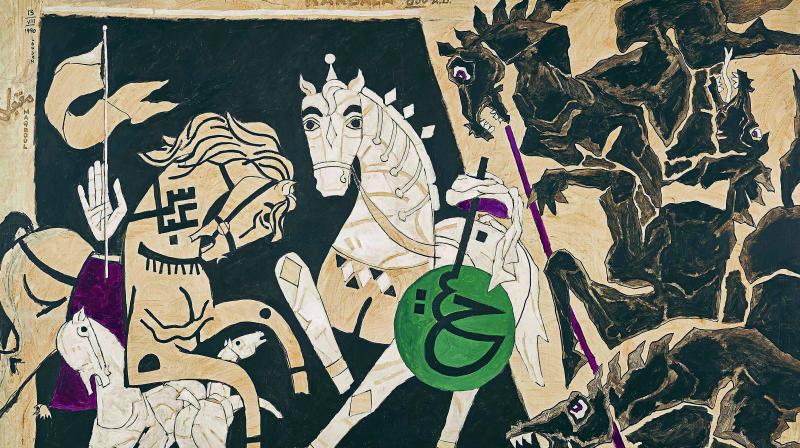 Celebrating the Padma Vibhushan awardee’s contribution to modern Indian art, AstaGuru, an online auction house, is all set to present a comprehensive collection of the artist’s works in a virtual auction on August 29 and 30.

Titled simply ‘Husain’, this dedicated event will be the largest solo artist auction to be curated in India of the portfolio of an Indian artist, in terms of value and the diversity of the works on offer.

Featuring 36 lots with a consolidated estimated value of Rs 40 crore, the auction will showcase Husain’s mastery, represented by some of the most important paintings he created during his illustrious career.

Talking about the initiative, Tushar Sethi, CEO, AstaGuru, says, “M.F. Husain is a revered artist with an outstanding legacy. His art truly represents the heartbeat and glory of India and her people. The auction is a tribute to the master, and celebrates his contribution towards the development of Modernism in India. Coming up with this auction has been an exciting experience.”

The initiative will also feature a rare selection of jewellery and tapestries designed and co-created by the artist, which have never been offered at an auction before. His highly sought-after toys will also be part of the sale.

It’s not very well known that Husain dabbled in tapestry, jewellery and toys. He initially made toys to earn a living, and after he became an established artist, revisited the craft to celebrate the birth of his children, shares Tushar.

The 20-foot composition was created during an extremely significant phase in the artist’s career —  the late 1950s — when he had achieved international repute and his style and philosophy of art had received global acclaim.

‘Voices’ was highly lauded internationally and won Husain the International Biennale Award at the Tokyo Biennale in 1959. This led on to his receiving a Rockefeller Scholarship to study in New York, where he was exposed to the works of the Abstract Expressionists.

‘Voices’ is particularly significant because in it, Husain deviates from his highly symbolic style with the focus on the human, to celebrate the unseen syntax of an artist’s world. It seeks to integrate intangible forces into a tangible reality.

The auction will also feature Husain’s preliminary sketch for his famous painting titled ‘Between The Spider and The Lamp’.
This quintessential Husain creation is considered the most iconic example of modern Indian art, and incorporates an essential element of his artistic grammar — the female form.

Despite the ongoing pandemic, Tushar feels that the auction will strike the right chord because of the important works that it will be bringing under the hammer. “Art collectors are keen to acquire historically significant artworks. I believe that good art will always create demand.

Our sourcing process is research based; we study every aspect of the work before including it in the auction. The auction was scheduled during our annual timetable planning.

And yes, an exclusive auction such as our ‘Husain’ edition, takes a lot of work and planning, but it was all worth it,” he says.

Going forward, Tushar and his team at AstaGuru will be conducting their annual ‘Exceptional Timepieces’ edition (dedicated to clocks & watches), ‘Heirloom Jewellery & Silver’ auction and a Modern Indian Art auction in December.

15 stocking fillers for kids of all ages

10 ways to have a cheaper and greener Christmas