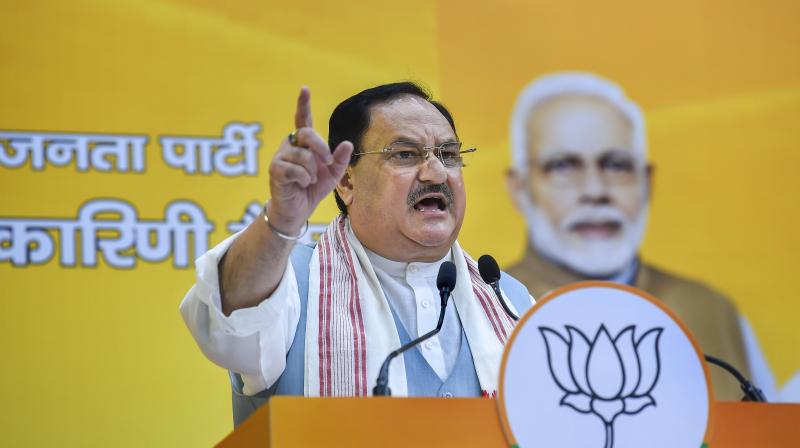 Launching a virulent attack on the DMK, BJP national president J P Nadda on Monday said that party was protecting people who were not working for the nation and were inciting the feelings of others against the spirit of the nation.

Addressing the BJP State executive meeting via video conference, Nadda urged the people to not vote for the DMK in the next election as the party did not allow the assimilation into the national mainstream and was confident that the BJP would win more seats in the local body and Assembly elections.

He cited the construction of the temple for Lord Ram in Ayodhya in Uttar Pradesh and the withdrawal of special status for Jammu and Kashmir as two big things that party members should use to highlight the idea that India was one from Kashmir to Kanyakumari.

Calling upon the people to ensure that divisive forces did not become strong in the State, he referred to Karuppar Kootam, the promoters of the Youtube channel that allegedly denigrated the hymns sung in praise of Lord Murugan, ‘Kantha Shasthi Kavacham.’

Urging the State unit to counter elements like Karuppar Kootam by coming up with matching content, he asked his party members devise mechanisms to win elections, favouring WhatsApp groups at the level of the booth committees to take the speeches of Prime Minister Narendra Modi and other BJP leaders to the people.

The WhatsApp groups should discuss national, regional and local issues, emphasising on youth, women, tribal people, Dalits and people at the grassroots and try to bring them to the mainstream he said.

Tamil Nadu, which had been talking about Tamil language, should know that the National Education Policy (NEP) 2020 aimed at encouraging education through one's mother tongue. He regretted that the NEP was being opposed for imposition of Hindi by the DMK and also the ruling AIADMK.

Nadda asked his party members to talk about NEP to the people and also to do a deeper study into it to ensure that the people of the State were brought into the national mainstream.

Stalin hits back at Nadda

DMK President M K Stalin lashed out at BJP chief J P Nadda for targeting the DMK, instead of giving constructive advice to his party members, while addressing his party’s State executive through video conference on Monday.

BJP was the party that stood against Tamil culture and national integration, Stalin said in a statement, recalling an earlier undemocratic remark by BJP leader Muralidhar Rao that the BJP would not allow M K Stalin to become the Chief Minister.

The arrogance of holding power at the Centre had led to the BJP stifling democracy from Kashmir to Kanyakumari and attacking the DMK by riding on the back of the State government, which was just a puppet in its hands, Stalin said.

He recalled that the party stood up against Emergency and paid a price for it by losing power and said that the BJP had now imposed an undeclared Emergency. States powers were being taken away, the country’s plurality had been defaced, a dominant language was being imposed over others’ mother tongue and social justice was being undermined, Stalin said.

Accusing the BJP of locking up political leaders who raise their voice for democracy in their homes and putting in jail under draconian laws social activists, intellectuals who speak in favour of freedom of expression and writers, he said.

The basic duty of democracy was to raise ones’ voice against all these and it was the responsibility of the DMK, which was the third largest party in Parliament, he said.

It was a cheap tactic of BJP leaders to term as anti-Indians and anti-nationals all those who speak the truth aloud and ask for their rights and the BJP chief was not an exemption, Stalin said and added that the Constitution described India as an Union of States.

A mild defense of Republican hypocrisy on the Supreme Court