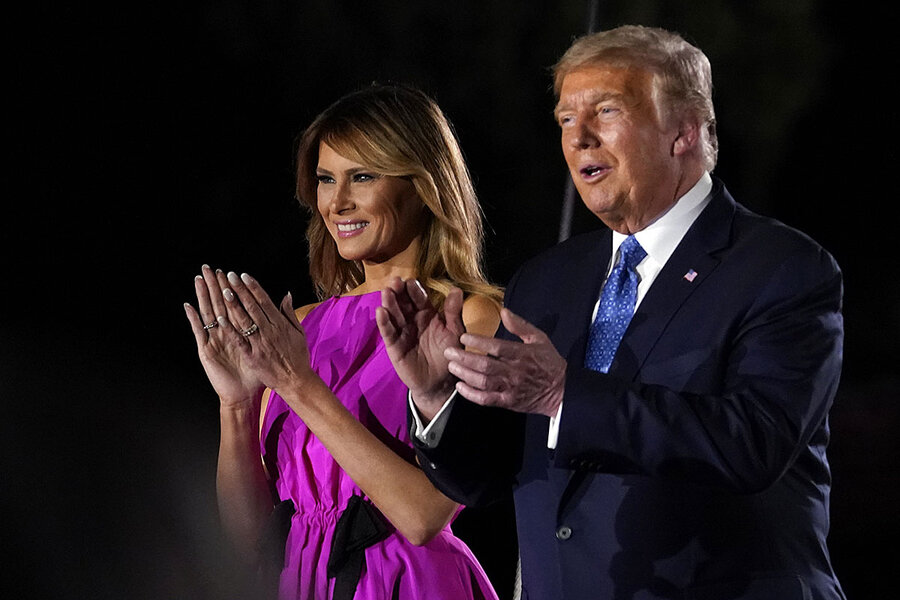 “Presidential power,” wrote the scholar Richard Neustadt, “is the power to persuade.”

President Donald Trump may be putting that time-honored observation to the acid test, running for reelection in a nation beset by epic challenges. A chief executive with lesser powers of persuasion might be crushed by the turmoil taking place on his watch – a pandemic that has killed 180,000 Americans, double-digit unemployment, racial unrest, and increasingly routine weather extremes that many link to climate change.

But President Trump is no ordinary American leader. As he demonstrated time and again in his business career, he has an uncanny ability to survive and even thrive amid adversity. His skills as a salesman and showman are his superpower, and over the next two-plus months – including Thursday night, when he formally accepts the Republican presidential nomination – he will deploy them to the hilt.

Mr. Trump has for the most part been campaigning on the same themes he ran on in 2016: “Make America Great Again” and “drain the swamp” – that is, uproot the entrenched elites. Despite the fact that he’s now the incumbent, he’s really still an outsider, in his telling.

“He’s demonizing the same people: immigrants, foreigners, the media,” says Republican pollster Whit Ayres. “It’s essentially a replay of the message that put him in the White House in 2016 – barely, but it worked. There’s a natural tendency to go back to what worked before.”

Historians see efforts to emulate President Ronald Reagan, another disruptor who won the White House twice, on the argument that he needed two terms to effect his conservative “revolution.” Others see parallels with President Richard Nixon, who ran on “law and order” amid the tumult of 1968, though he was not the incumbent president.

At this point, Mr. Trump has been in office more than three and a half years. Despite the nation’s massive challenges, he and his surrogates are pitching a positive message: He made America great once, and he can do it again. Or as Vice President Mike Pence put it Monday, “We’re going to make America great again … again!”

The president’s economic message centers on the low unemployment, robust growth, and reduced taxes and regulation that were the hallmarks of his record before the coronavirus hit. Blame for the pandemic lands squarely with others, Mr. Trump says: China, where the virus originated, and with the Democratic mayors and governors who failed to halt its spread.

Mr. Trump also portrays Democrats in Congress, led by House Speaker Nancy Pelosi, as villains (they offer the same assessment of him), amid a three-week hiatus in talks with the White House over more aid for struggling Americans. Thursday afternoon, Speaker Pelosi and White House Chief of Staff Mark Meadows were reportedly set to resume negotiations on the next COVID-19 relief package.

Still, it’s a much more complicated message than in 2016 – since many of the problems the president is promising to solve have occurred on his own watch.

Mr. Trump, in effect, is trying to be the Harry Houdini of American politics – seemingly bound by the chains of multiple crises, but clever enough to escape with his political life. One bright spot for the president is that Democratic nominee Joe Biden got little to no “bounce” in the polls out of his convention last week, while Mr. Trump’s job approval has crept up in recent weeks to an average of 44%.

While Mr. Biden argues that he represents a return to normality and decency, Team Trump counters with Mr. Biden’s long record in Washington – 36 years in the Senate and eight years as vice president. Mr. Biden’s election, they say, would bring both a deeper “swamp” and a leftist economic program that would send the nation on the path to socialism.

Presidential historian Gil Troy of McGill University in Montreal questions whether Mr. Trump can pull off a Reaganesque comeback.

“Ronald Reagan’s second-term election, most famous for its ‘Morning in America’ strategy, had a more positive record to run on, a more positive song to sing,” says Professor Troy.

Another presidential scholar, David Pietrusza, sees multiple historical analogies for the Trump team to draw upon.

“Surprisingly, FDR looked very shaky in the summer of 1936,” Mr. Pietrusza writes in an email, referring to President Franklin Roosevelt’s first reelection campaign. “But [Republican nominee Alf] Landon and the GOP ran an awful campaign, and FDR made no great mistakes and coasted to a historic, crushing landslide.”

Harry Truman’s “Give ‘em Hell” campaign in 1948 was a similar case, Mr. Pietrusza says. “At various times, Truman was left for dead, but after a very strong convention and after his challenger picked a running mate from California who added nothing to the ticket, Harry became president in his own right.”

President Reagan had only a one-percentage-point lead in December 1983, but he turned on the charm and touted “Morning in America,” while Democratic nominee Walter Mondale said he would raise taxes, Mr. Pietrusza notes. In November 1984, Mr. Reagan won big.

But Mr. Trump is unique, as are the times in which he is running for a second term. Historical analogies go only so far.

Republican National Committeeman Henry Barbour of Mississippi points to small things that could be telling as November approaches. Mr. Biden stayed in his home state of Delaware for the duration of the Democratic convention last week, which was supposed to be in Milwaukee, Wisconsin, but was held mostly virtually. This week, more than 300 Republican party figures gathered in Charlotte, North Carolina, including Mr. Barbour, for a reduced version of their in-person convention.

Mr. Trump and Mr. Pence spoke from Charlotte on Monday in a show of defiance against the coronavirus that has shut down much of American public life. The president had earlier moved the larger, in-person convention activities to Jacksonville, Florida, after North Carolina’s Democratic governor refused to allow the mega-gatherings that are the essence of national party conventions.

In July, Mr. Trump canceled the Jacksonville component of the GOP convention after an uptick of coronavirus cases in that city.

Mr. Barbour says the president and the Republican National Committee wound up modeling what they want the country to do: behave responsibly and avoid large gatherings, but also not allow reasonable daily activity to grind to a halt.

“I’m proud of what the RNC did,” he says. “That carries over into a much broader contrast and approach: people going to work and doing what they can.”