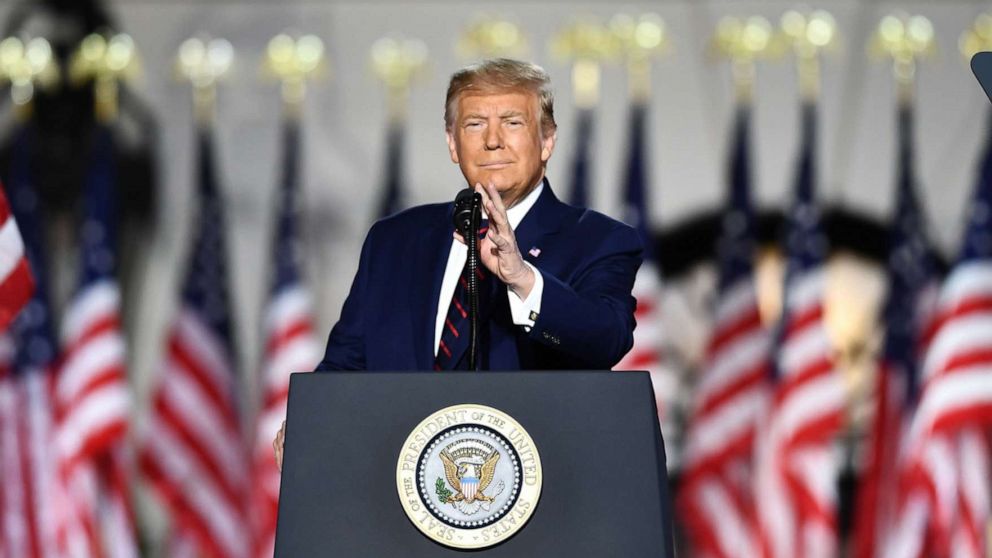 The Republican National Convention came to a close Thursday, but not before remarks from some of the nation’s most prominent conservatives, including the party’s congressional leaders, President Donald Trump’s daughter (and White House adviser) and the chief executive himself.

The night brought a close to two weeks of unprecedented political conventions but also kick started the presidential campaign’s homestretch, reaffirming several of the themes likely to play a major role in the successes and failures of those on the ballot in November.

Here are the key takeaways from night four of the RNC:

Law and order threatens to overshadow a racial reckoning

It’s no surprise that Republicans leaned into one of President Trump’s favorite campaign messages, but that embrace threatened to drown out the dominant social movement of his first term.

A master marketer throughout his checkered real estate career, Trump has branded himself the law and order president, a label pliable enough to be employed in any number of tough-guy situations, but unignorable in reference to the ongoing racial justice unrest.

The party proudly touted its work on behalf of Black Americans: the creation of economic opportunity zones, expanded funding for Historically Black Colleges and Universities, and criminal justice reform (an issue not limited to the African Americans, but one the administration regularly ties to the Black community). It gave prime speaking slots to Black leaders like Sen. Tim Scott, R-S.C., and Kentucky Attorney General Daniel Cameron.

But the party could barely bring itself to utter the name, Jacob Blake.

Only Housing and Urban Development Secretary Ben Carson extended sympathy to Blake, the Black man shot by police seven times in Kenosha, Wisconsin, just four days ago, even after Republican National Committee Chair Ronna McDaniel told ABC News earlier in the day that she hoped speakers did just that.

Instead, Republicans offered four days of criticism for protestors. Speakers highlighted violence and riots, looting and destruction, but declined to elucidate their opposition to the specific reforms suggested by those who have demonstrated peacefully. Lawmakers are, of course, allowed to disagree with ideas proposed by activists, but the GOP appeared unwilling to even entertain the debate. Voters will be bombarded with terms like “qualified immunity” in the coming weeks, but a search of the RNC transcript for that phrase comes up short.

And so, amid all of the talk about bringing rioters and looters to justice — and even while acknowledging George Floyd’s death as “unforgivable,” as Rudy Giuliani put it — the rationale behind why protesters have taken to the streets was all but lost.

Giuliani decried efforts at criminal justice reform in New York City, like the early release of non-violent offenders, and the work of “progressive district attorneys” — the types of changes and leaders demonstrators are seeking when they first head out to protest.

As the summer has progressed, it’s become evident that the otherness of immigrants that dominated so much of Trump’s 2016 campaign rhetoric is, in some way, being replaced by the otherness of the protestors. Similarly, warnings of “radical Islamic terrorism” have evolved into warnings about the “radical left.”

Trump speaks of preserving the safety of suburban housewives from the threat of low-income housing (low-income housing one might find in a city, where most of the protesting is taking place) using much of the same language he employed four years ago, albeit stopping short of building walls around the nation’s upper and middle-class enclaves.

As a result, the same Black Americans that Republicans spent so much of the past four days courting — going so far, in the case of Georgia State Rep. Vernon Jones, of accusing Democrats of wanting to keep them on “their mental plantation” — were likely left questioning why the party appeared unwilling to have a serious conversation on the root causes of the very demonstrations they so desperately want to stop.

The past-tense pandemic plays out on the South Lawn

National Economic Council Director Larry Kudlow raised the eyebrows of many White House critics on Wednesday when, in the midst of touting the Trump administration’s initial economic success, he turned to the coronavirus.

Kudlow’s reference to the pandemic in the past-tense could have been a forgettable aside, particularly after Trump spoke Thursday of the ongoing effort to produce a vaccine and “crush” the virus, but the audience for the president’s remarks on night four appeared as if it was living in Kudlow’s reality, not Trump’s.

Nearly 2,000 overwhelmingly mask-less Republicans sat in close quarters on the White House’s South Lawn Thursday, the type of gathering public health experts have been warning against for months.

For days Trump’s supporters touted his decision earlier this year to halt travel from China, claiming it may have saved thousands of lives. They applauded his push for the quicker approval of novel treatments and effort to fast-track a vaccine. But it may now be difficult for voters to reconcile the message about a president doing everything he can to keep Americans safe while simultaneously looking down approvingly at thousands of them putting thousands more at risk.

The dichotomy played itself out in the remarks of some convention speakers, who attacked those who disagreed with the administration while questioning the expertise of its advisers.

“Government’s power at all levels is limited to the confines of our Constitution, which protects our god-given liberties and civil rights,” South Dakota Gov. Kristi Noem said Wednesday. “We are not and will not be the subjects of an elite class of so-called experts.”

Instead, the GOP spent the week portraying Trump as the ultimate expert and one who has made all of the correct calls on the pandemic along the way, despite total cases approaching six million and a national death toll topping 180,000. But the question for voters — and especially for those in Thursday’s audience — is whether the evidence proves more persuasive than the rhetoric. Voters have over two months to decide, but those at the White House allowed to flaunt pandemic apathy — like Tulsa rally-goers before them — may unfortunately need to confront the effects of Trump’s decisions much sooner.

For three days, the GOP put on a program that might as well have been called the President Donald Trump Convention, rather than the Republican National Convention. While several rising Congressional stars, like Sen. Tim Scott, R-S.C., and Reps. Dan Crenshaw, R-Texas, and Elise Stefanik, R-N.Y., were afforded the opportunity to introduce themselves to a national audience, there was a dearth of candidates facing competitive races.

Scott isn’t up for reelection this year; neither are Sens. Marsha Blackburn, R-Tenn., and Rand Paul, R-Ky. Crenshaw and Reps. Matt Gaetz, R-Fla., and Jim Jordan, R-Ohio, are all popular on the Fox News circuit, but none of them is running in a district that could flip. Neither is Madison Cawthorn, the 25-year-old candidate from North Carolina’s 11th district who delivered inspiring remarks about perseverance in the wake of an automobile accident that left him partially paralyzed, but who shouldn’t have a difficult time succeeding Mark Meadows, after the now-White House Chief of Staff won his race by over 20 points in 2018.

Senate Republicans hold a narrow, three-seat majority; Democrats are attempting to expand their 34- seat House edge, but you wouldn’t have known it over the course of 10 hours of speeches almost entirely focused on the presidential race. Even House Minority Leader Kevin McCarthy made no specific mention of supporting down-ballot candidates.

“As you cast your vote this November remember this: Four years ago, President Trump promised to be your voice. He kept that promise,” McCarthy said, eschewing reminders about non-Trump names on the same ballot.

Only Senate Majority Leader Mitch McConnell, R-Ky., attempted to define the importance of the legislative branch, albeit by invoking a favorite boogeywoman.

“I’m immensely proud of the work the Republican senate has done,” he said. “We are the firewall against Nancy Pelosi’s agenda.”

While building their programs, the political parties are conscious of striking a balance between politicians and average Americans; federal and local officials; men, women and representatives of all races. But unlike the Democrats, who gave speaking slots to leaders like Sen. Bernie Sanders, I-Vt., who don’t always see eye-to-eye with their presidential nominee, Republicans demonstrated a preference for members of the Trump wing of the party.

For that reason, it’s not a surprise Sen. Susan Collins, R-Maine, didn’t make an appearance, ahead of what’s likely to be the tightest race of her career; nor from Sens. Cory Gardner, R-Colo., or Thom Tillis, R-N.C., whose purple states have proven themselves to be relatively Trump-phobic. But where was Sen. Steve Daines, R-Mont., whose state went for the president by 20 points in 2016 and is now attempting to fend off the popular Gov. Steve Bullock?

Or Sen. Lindsey Graham, R.S.C., one of Trump’s most vocal defenders, but someone who suddenly finds himself locked in a competitive campaign with a well-funded Democratic challenger?

Or any of the 41 candidates attempting to win back House districts flipped by Democrats in 2018. Surely there must have been a few who have embraced the president who could’ve benefitted from the national exposure.

Whether Trump wins or not, should Republicans lose control of the Senate, they may regret shifting the chamber to the backburner during the convention. A second Trump term without McConnell calling the shots in the Senate won’t be able to confirm all of the conservative justices so prized by this week’s speakers. And a Biden presidency with control of the entire Congress is likely to undo many of the successes so touted by the convention’s speakers and institute much of the agenda that same group described as “Socialist” and “extreme.”