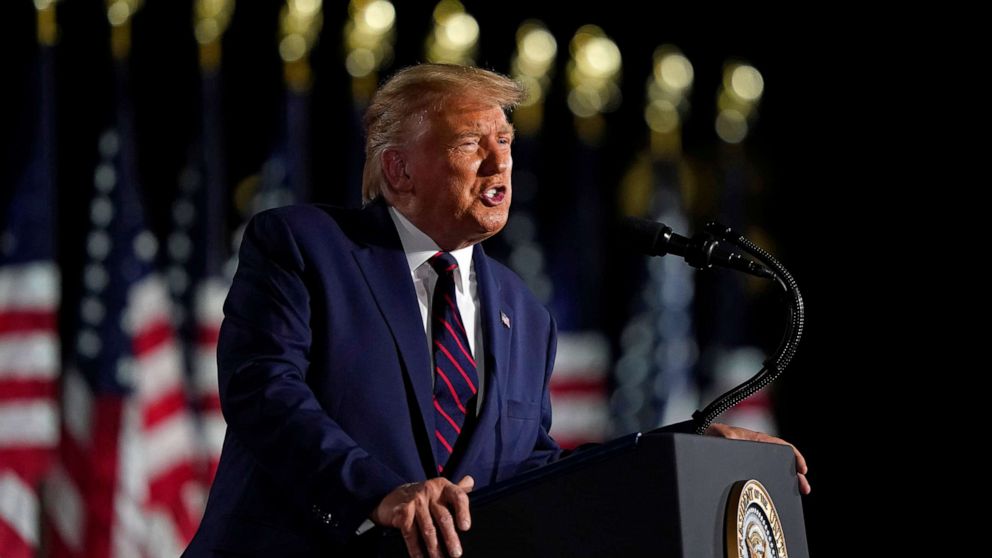 Washington D.C. — This week’s Republican National Convention showcased the intensity with which President Donald Trump has shaped the party in his image. Many of the speakers this week adopted his spite for the media, his apocalyptic rhetoric — and his false statements. Here’s a look back at this week and some of the biggest mistruths from the RNC event, starting with the words of the president himself.

Trump set the tone for this convention on day one, claiming falsely that Democrats are “stealing” the coming election by harvesting votes and mailing out ballots that don’t require voter verification through signatures.

The claims are untrue. But the deeper truth is even more disturbing. The president’s comments stoke fear and sow doubt about the election results. And importantly, they lay the groundwork for him to dispute the results of the next election, assuming he doesn’t like the result.

The facts are that both Republican- and Democrat-controlled states are preparing for an influx of mail-in voting amid a global pandemic. Some states are mailing ballots to registered voters. States each do things differently, but there isn’t a single state that is planning to undue its protocol for signature verification.

Democrats introduced a bill in March that would give voters the opportunity to dispute any signature mismatch, but that’s very different from Trump’s distorted claim.

On Sunday, Twitter fact checked the president, slapping a warning on his tweet that claimed without evidence that mailboxes are not “Covid sanitized.” Twitter said the president had violated its rules “about civic and election integrity.”

The CDC recommends mail carriers clean their hands “before and after making deliveries, including after picking up from drop-boxes and customer pickups.”

A more reasonable message from the president would be to make sure to wash your hands after touching a mailbox.

Instead the president tweeted on Sunday: “So now the Democrats are using mail drop boxes, which are a voter security disaster. Among other things, they make it possible for a person to vote multiple times. Also, who controls them, are they placed in Republican or Democrat areas? They are not Covid sanitized. A big fraud!”

There is perhaps no claim more incontrovertibly false than the one made by White House Press Secretary Kayleigh McEnany in her address to the RNC, when she said that Trump stands by Americans with preexisting medical conditions — meaning he won’t let the government take away protections Americans have from health insurance companies who may want to charge more for people with preexisting medical conditions. McEneny spoke about it in the context of her own medical procedure: a preventative double mastectomy.

“I had only met President Trump on a few occasions, but now I know him well,” McEnany said, and I can tell you that this president stands by Americans with preexisting conditions.”

He may in principle, but not in practice. At this moment, Trump’s administration is part of a lawsuit that seeks to invalidate the entire Affordable Care Act on the basis of those exact protections that it provides. If he is successful, no American will be guaranteed protections for preexisting conditions. And contrary to what the president would have us believe, there is no backup plan.

Trump, in a June 2019 interview with ABC News, promised to unveil a “phenomenal” new health care plan that he said would “be less expensive than Obamacare by a lot.” He said the administration would be presenting a proposal “in about two months, maybe less,” but no plan was ever announced.

The president’s eldest son, Donald Trump Jr., distorted former Vice President Biden’s words on the economy during his speech to the RNC on Wednesday night.

The truth is that Biden was asked in an interview with ABC’s David Muir if he would shut the economy down again if it health experts recommended it. Biden answered yes.

Joe Biden: “I will be prepared to do whatever it takes to save lives because we cannot get the country moving until we control the virus.”

David Muir: “So if scientists say shut it down?”

Joe Biden: “I would shut it down, I would listen to the scientists.”

To claim only that he is “talking about shutting down the economy again,” is disingenuous. He is saying he would listen to public health experts, which strikes a contrast with Trump. For example, just this week ABC learned that the White House’s coronavirus task force made a stunning decision that the CDC should reverse course and tell the public that not everyone who comes into contact with the virus needs to be tested. And while his task force ultimately signed off on the decision, it did so without the approval of the nation’s top infectious disease expert, Dr. Anthony Fauci. The decision was approved at a meeting of the task forceduring on Aug. 20 — the same day Fauci was under general anesthesia for surgery to remove a polyp from his vocal cords.

Vice President Pence made a number of false or misleading claims as he formally accepted his party’s nomination afrom Fort McHenry in Baltimore Wednesday night.

1. Pence quoted former Defense Secretary Robert Gates, who wrote in his 2014 memoir that Joe Biden had “been wrong on nearly every major foreign policy and national security issue over the past four decades.” The quote is accurate, but it lacks critical context.

For instance, Gates does not support Trump, and he has recently favored Biden. Two months ago, Gates described Trump as a “divider” while speaking to the PBS Newshour. And in September 2016, Gates wrote a blistering op-ed about Trump’s foreign policy in which he concluded: “At least on national security, I believe Mr. Trump is beyond repair. He is stubbornly uninformed about the world and how to lead our country and government, and temperamentally unsuited to lead our men and women in uniform. He is unqualified and unfit to be commander-in-chief.”

2. Pence followed the president’s lead of late and falsely claimed Biden supports defunding police departments. Biden has said explicitly that he does not support defunding the police, a rallying cry born out of the recent George Floyd and Black Lives Matter protests that swept the nation this summer. Pence claimed that when Biden was asked whether he’d support cutting funding to law enforcement, he replied, “Yes, absolutely.” But that’s not true.

Here’s what Biden actually said when asked by ABC’s Robin Roberts on Sunday:

Robin Roberts: “President Trump says that you want to defund the police. Do you?”

During an interview in July Biden answered “yes, absolutely” when he was asked if some police funding could be redirected. But that’s not equivalent to defunding police departments.

In his Thursday night speech the president sought to champion the reforms to the Veterans Affairs department by falsely suggesting he was responsible for the law known as Veterans Choice. The program allows veterans to see private doctors outside of the government system. But the law was first passed in 2014 under President Barack Obama.

Trump expanded the program but was by no means its founder. Trump walked out of a press conference earlier this month when a reporter challenged him on his claim.

The president made false claims about the wall he’s promised on the southern border. He claimed it “will soon be complete.” But for context, remember that he promised a wall that would expand nearly the totality of the border. In reality, the Trump administration has constructed about 300 miles of border wall. According to the U.S. Army Corps of Engineers, only six miles of that barrier has been built where none existed previously. In other words, most of it is replacement barrier.

He also falsely suggested that Biden plans to tear down those barriers if elected. “[Biden] is even talking about taking the wall down. How about that?,” Trump said.

“There will not be another foot of wall constructed on my administration,” Biden added.

A number of speakers at the RNC this week have claimed that under Trump, ISIS has been defeated. Former Navy SEAL Texas representative Dan Crenshaw said on Wednesday “the defeat of ISIS was the result of America believing in our heroes, our president having their backs and rebuilding our military so we’d have what we needed to finish the mission.”

While it’s true that their territory in Syria known as the caliphate has been retaken and that their leader, Abu Bakr al-Baghdadi was killed in a U.S. airstrike — all under Trump’s watch – it’s not accurate to say the terror group is entirely defeated.

In fact, both the Pentagon and the United Nations agree the terror group is still intact. The United Nations Security Council released a report this month that says “more than 10,000 ISIL fighters are estimated to remain active in Iraq and the Syrian Arab Republic.”

In his acceptance speech the president used false data to suggest the United States if fairing better than other nations when it comes to combating the coronavirus.

According to John’s Hopkins, of the 20 countries most affected by the virus, the U.S. has the 10th highest case mortality rate.

Keep in mind no country has experienced more death from COVID-19 than the United States, a number John’s Hopkins currently estimates at 180,000.

Never made a statement in BJP’s favour in last 30 years: Sibal to Rahul

3 key takeaways from night 4 of the Republican National Convention