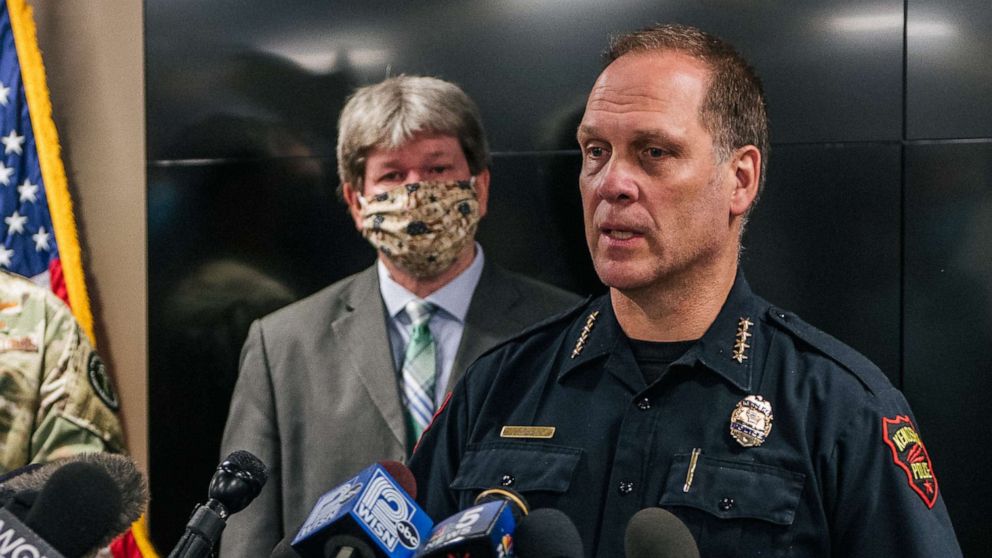 The American Civil Liberties Union is calling for Kenosha’s top law enforcement leaders to resign after Jacob Blake, a Black man, was paralyzed after being shot in the back by a white Kenosha officer, and resulting protests turned deadly.

Two days after Blake was shot, a counter-protester allegedly shot and killed two demonstrators. Kyle Rittenhouse, a 17-year-old from Antioch, Illinois, has been charged in Wisconsin with two counts of homicide, one count of attempted homicide, two counts of recklessly endangering safety and one count of possession of a dangerous weapon.

Lin Wood, one of Rittenhouse’s attorneys, said his client was acting in self-defense. “From my standpoint, it’s important that the message be clear to other Americans who are attacked that there will be legal resources available in the event false charges are brought against them,” he said. Rittenhouse’s extradition hearing is set for Sept. 25.

The ACLU called for the immediate resignation of Kenosha Police Chief Daniel Miskinis and Kenosha County Sheriff David Beth in a statement this week, charging that Beth’s deputies “fraternized with white supremacist counter-protesters” and “allowed the shooter to leave as people yelled that he was the shooter.” The ACLU further alleges that Miskinis “blamed the unidentified victims in Tuesday night’s shooting for their own deaths.”

“The ACLU strongly condemns Sheriff Beth and Police Chief Miskinis’ response to both the attempted murder of Jacob Blake and the protests demanding justice for him,” said Chris Ott, executive director of the ACLU of Wisconsin. “Their actions uphold and defend white supremacy, while demonizing people who were murdered for exercising their First Amendment rights and speaking out against police violence.”

At a news conference following the death of the two protesters, Miskinis pointed out they had broken the city’s 8 p.m. curfew.

“Persons who were out after the curfew became engaged in some type of disturbance and persons were shot,” he said. “Had persons not been in violation of that, perhaps the situation might not have happened.”

Miskinis has since said his comments were taken out of context.

During a Wednesday news conference, Beth attributed officers’ failure to arrest the shooter on the spot as having “tunnel vision” in a high-stress situation. While Beth himself wasn’t at the scene after the shooting, he imagined that the “screaming,” “hollering,” “chanting” and nonstop radio calls contributed to a chaotic scene in which the shooter walked free.

Beth acknowledged to ABC News that officers who thanked Rittenhouse prior to the shooting should not have done so, and adamantly stressed that he would never invite armed citizens to help police maintain the peace.

Beth previously had been criticized for making racist public comments. At a 2018 news conference, he called a group of Black individuals who were arrested after shoplifting and getting into a high-speed car chase with police “garbage people.”

“We need to build warehouses to put these people into it and lock them away for the rest of their lives,” Beth said during the 2018 new conference. “Let’s stop them from truly, at least some of these males, from going out and getting 10 other women pregnant and having small children.”

After meeting with the NAACP, Beth released a public apology letter.

“I should have kept my comments better directed toward the incident itself and not allowed my emotions to get the better of me,” he wrote. He would go on to recant that letter. “Everything I basically said in the press conference is really the way I feel,” he told the Kenosha News.

In an interview with ABC News’ Alex Perez, Beth said that he didn’t understand how his comments could have been perceived as racist. “I didn’t see color,” he said. “I saw five people committing a crime that almost killed a 16-year-old mother.”