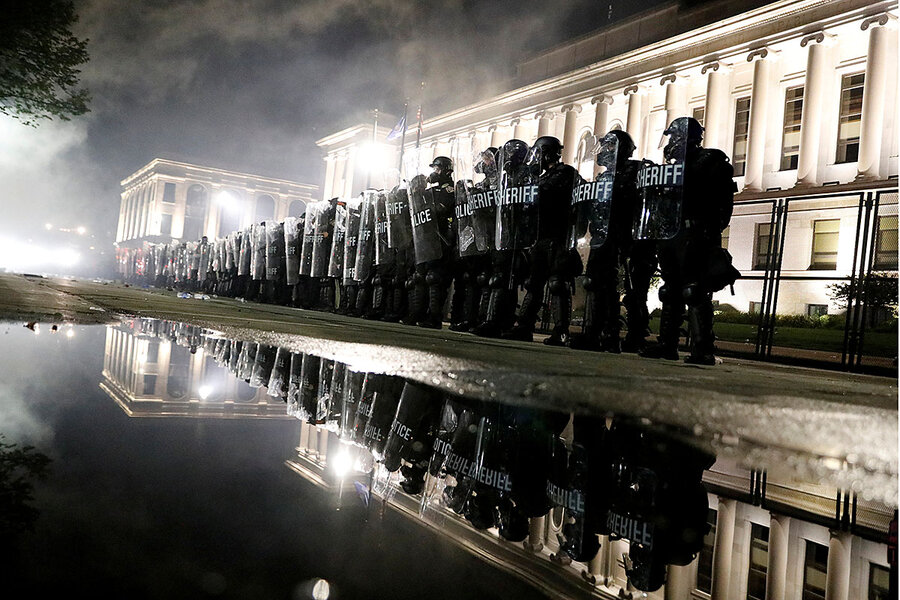 “We are in a real bad state,” says Cephus Johnson, uncle of Oscar Grant, who was shot dead by BART police at the Fruitvale station in Oakland, California, in 2009.

On one hand, says Mr. Johnson, the social upheaval over police killings of Black people via protests and daily discourse has raised the national consciousness of white supremacy, white privilege, and the fact that Black people can be unjustly targeted by law enforcement, says Mr. Johnson, who founded the Love Not Blood Campaign in his nephew’s memory.

But on the other hand, the cycle of violence and protest continues to explode.

“It becomes so obvious that [this cycle] creates not just a lot of pain and anger, but fear on both sides,” he says.

In 2020 this phenomenon has centered on Minneapolis; Portland, Oregon; and now Kenosha, Wisconsin, after a white police officer shot a Black man, Jacob Blake, in the back seven times Sunday. His family has said he is now paralyzed.

Protests quickly erupted in the small city in the southeast corner of a critical swing state. Most were peaceful but not all; some businesses were burned and at least four looted.

Armed civilians, some from out of state, appeared on the streets as self-proclaimed auxiliaries to law enforcement. Late Tuesday night a group of the vigilantes clashed with protesters in a wild melee in which two protesters died from gunfire and another was wounded.

The next day, police arrested and charged a white Illinois teenager – Kyle Rittenhouse – with first-degree intentional homicide in connection with the shootings.

Reactions to these events have, if anything, highlighted the split between the opposing sides of a fearful America.

In an extraordinary move, many professional athletes stayed off courts and fields in rippling boycotts on Wednesday and Thursday. The effort began in pro basketball, which has a high percentage of Black athletes and a relatively liberal fan base, then ricocheted through tennis and soccer and even into Major League Baseball.

The athletes and other protesters appeared particularly incensed over what they saw as the revealing differences in the way police treated Mr. Blake and Mr. Rittenhouse. Mr. Blake was shot during an arrest. Mr. Rittenhouse – illegally carrying a semi-automatic rifle into a protest – was given a water bottle by a police patrol prior to his alleged deadly encounter with demonstrators. He was taken into custody the next day at his Illinois home without incident. (On Fox News, host Tucker Carlson defended Mr. Rittenhouse’s alleged shootings as necessary to preserve law and order “when no one else would.”)

“The law enforcement responses to these two people is the problem … the overly violent and excessive response to Blake and the very measured and almost compassionate response to the 17-year-old with a gun,” says Theodore R. Johnson, a senior fellow at the Brennan Center for Justice in New York.

Meanwhile, at the Republican National Convention this week President Donald Trump signaled that he would run for reelection as a crusader for “law and order” – a phrase he sometimes tweets in all caps. The St. Louis couple charged with one felony each for brandishing guns at Black Lives Matter demonstrators marching past their mansion were featured convention speakers the first night.

President Trump has not been subtle on this subject. His target is white suburban voters turned off by the urban looting and arson they see on their screens.

“If you want a vision of your life under a Biden presidency, think of the smoldering ruins in Minneapolis, the violent anarchy of Portland, the bloodstained sidewalks of Chicago, and imagine the mayhem coming to your town, and every single town in America,” Mr. Trump said in a Pennsylvania speech earlier this month.

That might seem a bad electoral play in an America where protests have drawn large, racially diverse crowds. It’s not 1968, when there also was widespread civil unrest in American cities. But the Trump campaign appears to believe that resorting to barely cloaked language in attacks on his rival could win back the sliver of voters it needs to pull within the polling margin of error in key Rust Belt swing states such as Wisconsin. Indeed, prior to the incidents in Kenosha, the public opinion effect of the protests on white voters had begun to recede, according to data compiled by FiveThirtyEight. White support for Black Lives Matter dropped 16 percentage points from June through early August, for instance.

Previous racial justice movements in America inevitably produced backlashes, and the U.S. is now in the midst of the backlash to Black Lives Matter and 2020 protests, says Jody Allen, a professor of history at the College of William & Mary.

Backlashes to change, especially when it comes to racism, are caused by fear of change, says Dr. Allen. In Kenosha, she adds, this is visible in this probable throughline: The police officer who shot Mr. Blake was likely afraid. Militia groups went to the city because they were afraid. Protesters were afraid of the militia, and attacked them. Mr. Rittenhouse pulled the trigger because he was afraid.

Responding to such fear requires resilience, she says: “We have to keep talking and keep working at this. There were definitely moments of hopefulness this summer. Now I think there is a possibility of losing hope. And I’m hoping people don’t lose hope.”

Fear may be an equal opportunity emotion, affecting both sides of a conflict. But does it affect both sides in equal measure?

Many Black Americans are taught from a young age to be wary of law enforcement officers. Their parents give them versions of a basic talk: Don’t run, be respectful, keep your hands in view, and don’t make abrupt moves.

People of color are born into their race and can’t take off their skin color, says Travis Dixon, a professor of communications at the University of Illinois at Urbana-Champaign and author of “Teaching You to Love Fear: Television News and Racial Stereotypes in a Punishing Democracy.”

For these and other reasons he rejects the notion of a duality of fear between Black Americans and American police.

“That officers get shot is tragic, but it’s tragic in the way that a soldier gets shot: Both sign up to put their lives at risk,” says Dr. Dixon.

Dr. Dixon says he has had an officer point a gun at him, been wrongfully arrested, and pulled over repeatedly. Virtually every Black man has similar stories, he says.

Jessica Burke sees things differently. A clinical psychologist and wife of a police officer, she says police cannot take off their skin, but neither can they really take off their profession. They can shed their uniform but not their responsibilities, she says.

“They’re expected to intervene … even when they’re off-duty. Being a police officer is drilled into them,” she says.

Dr. Burke teaches anti-stress and anti-anxiety classes to police families. Turning generalized anxiety into rational action is at the core of what she calls her “tactical thinking” program.

If an officer comes home with, say, a black eye from an on-duty fight with a suspect, their spouse, rather than freaking out and asking them not to return, needs to take rational steps to understand what happened. They can ask questions and design strategies to help them see the officer is in an organized group designed to protect them and knows what they’re doing.

“There’s always that [feeling in] general, ‘He’s leaving for work, he might not come back, something bad might happen,’ given that there’s a higher likelihood of something bad happening to our spouses than if we were married to stockbrokers,” says Dr. Burke. “Every one of these shootings and protests ramps the anxiety up even higher.”

Civility is a companion of justice

Division is the nature of politics. It’s how we process those divisions that matter, says Olusoji A. Akomolafe, executive director of the Center for African American Public Policy at Norfolk State University, a historically Black college.

You can see that in the political framing of the protests, he says. One side says the response must be “law and order.” The other insists it is a matter of “racial justice.”

Both have a point, but they have to acknowledge each other, says Dr. Akomolafe. The protesters should embrace a future of civility. Republicans should embrace that civility is the companion of justice.

But in general, it is the protests that have clearly succeeded, he says. If you compare them to the protests of the 1960s-era civil rights movement, you cannot miss what he calls the “silver lining”: the diversity of the protesters themselves, with more young people and more white Americans.

They’re not going away anytime soon, he says.

“The fact that the people who are on the streets now are not just Black and brown, but Black, brown, and white – that is hope for the future of this country,” says Dr. Akomolafe.

The poisonous lessons of a potential Trump victory