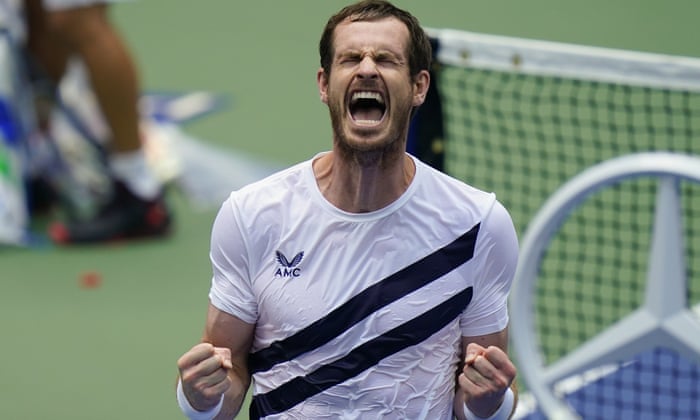 Andy Murray should have been on the next plane out of New York on day two of the US Open, leaving behind a city and a tournament in the grip of ennui, but he laughed at the odds yet again. He might win one more match or none, but the most stubborn fighter in tennis will not go quietly.

When a smattering of profane Scottish defiance extended the suffering beyond what seemed to be its natural term, the 24-year-old Japanese left-hander, Yoshihito Nishioka, who had match point in the fourth set, drowned slowly in resistance that defied logic, and Murray ground out a 4-6, 4-6, 7-6 (5), 7-6 (4), 6-4 win that carried him into the second round on Thursday.

For an hour, there were only faint echoes of Murray’s great days and nights in this magnificent Arthur Ashe stadium. For worryingly long stretches in his first match at Flushing Meadows in two years, and his first proper tournament since last November, the former world No 1, now ranked 134, looked a shadow of the bristling hero who won the first of his three slams by beating Novak Djokovic in the 2012 US Open final on this court. For most of the first three sets, Murray searched in vain for his driving sense of purpose.

Nishioka hits a tennis ball like a boxer throwing a wide left hook, swivelling on his lead toe and punching through the horizontal with short, concentrated power. The last lefty Murray played here was Fernando Verdasco, who beat him in four sets in the second round two years ago, but the Spaniard’s blows came from a foot or so higher. Nishioka is 5ft 7in, on the same eyeline as Diego Schwartzman, the ninth seed who fell in five against Cam Norrie on Monday.

Nishioka’s rapier blows began to hurt and Murray slowed visibly as the first set passed him by. He quickly lost control of the second with a couple of timid service games, and his best nights seemed a distant memory. There was no crowd, none of the New York wind he loves to fight, not even an incident to feed on. Nishioka was a set and 3-0 up with ball in hand against an opponent he respectfully referred beforehand as “one of the great players” and he would not relent.

From nowhere, Murray broke with a cracking crosscourt volley on the run for 2-4 in the second. He held for 3-4, and hopes rose as did his coach, Jamie Delgado. The roof was open and a little sunshine settled on proceedings. Murray saved one of two set points but broke a string on the next return and went two sets down.

When Nishioka threaded an ace down the T to hold to love and go 2-0 up in the third, Murray’s small cohort of supporters in the stands fell silent. Murray broke back for 3-all and held without angst to 15, front-running at last. He fought tigerishly to hold for 6-5 – and again he snapped a string when the break was on. They went to the tie-break, Nishioka dumped a backhand and Murray let out the roar of wounded lion as the fight went into a fourth frame.

Nishioka fashioned a match point in the fourth but hit long. Naomi Osaka chewed her face mask in the stands. Murray held to force another shootout. Where once there was inevitability, now there was growing uncertainty. When a head-shaking Nishioka crumbled, Murray served out, nervously, on the third set point and they went to a fifth.

“After looking so flat for so long in the early stages of this match, it is amazing the change in Murray’s body language after four hours on court,” his friend Tim Henman told Amazon Prime viewers at the start of the deciding session.

Nishioka broke in the fifth game, looking happier than for a little while – less so when Murray lobbed him to get it back, and raised his fist to the skies. Nishioka served to stay in the tournament at 4-5 after four-and-a-half hours, when he might have won it an hour earlier. He got to 30-all, 40-30, deuce. Murray’s backhand winner delivered him match point. A top-spin lob forced a weak reply from Nishioka that floated long and it was done.

Can Murray continue to produce his magic at 33, his bones rattling with replacement parts? Neither he nor his doctor can be sure. But he will try until he drops.