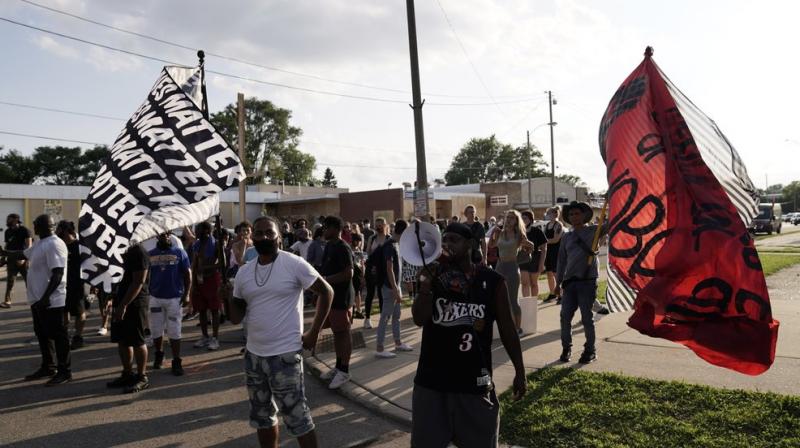 Kenosha: Dwindling numbers of anti-racism protesters milled about the streets of Kenosha, Wisconsin, late on Thursday as a tense calm prevailed for a second night following a wave of deadly unrest that began when a Black man was shot in the back by a white cop.

A crowd of no more than 100 demonstrators defied a dusk-to-dawn curfew as they assembled around a park near a courthouse that has been the hub of nightly skirmishes between protesters and police following Sunday’s shooting, which left Jacob Blake Jr, 29, paralyzed.

But groups of law enforcement officers – including some U.S. Marshals – occasionally rolled into the area in vehicles to make a handful of isolated, apparently targeted arrests of individual protesters, who were swiftly surrounded by police, grabbed and whisked away.

The core group of remaining demonstrators, carrying a few “Black Lives Matter” signs and chanting, “No justice, no peace,” gradually diminished to several dozen huddled in the park as the night wore on.

It was unclear whether those taken into custody were singled out because of outstanding warrants or because they were identified as agitators from previous nights of unrest. One such arrest, believed to be of a local activist leader, was made earlier in the day.

Kenosha, a predominantly white city on Lake Michigan, about 40 miles south of Milwaukee, became the latest flashpoint in a summer of protests over police brutality and racism after Blake was shot from behind by police on Sunday, as three of his young children watched.

The shooting, captured on video that went viral, unleashed three nights of angry protests that escalated into turmoil, including a wave of arson fires after dark on Monday and the shooting of three demonstrators – two fatally – by a teenager armed with an assault-style rifle on Tuesday night.

The accused assailant, 17-year-old Kyle Rittenhouse, of Antioch, Illinois, was arrested the following day. He was charged on Thursday with six criminal counts, including homicide, attempted homicide and reckless endangerment.

Rittenhouse, who authorities said they suspected was inspired by a “call to arms” posted by self-styled militia groups on social media, was due to make his initial court appearance on Friday in Illinois, where he was taken into custody.

Determined to keep unrest in Kenosha from flaring again, Evers, a Democrat, said Thursday he would welcome National Guard military police units from out of state specially trained in crowd control, including contingents from Arizona, Alabama and Michigan. Those units were expected to begin arriving on Friday.

The shooting of Blake reignited protests calling for racial justice and an end to police abuses in cities across the country since May 25 when George Floyd, a Black man in Minneapolis died in police custody under the knee of a white officer.

According to the Wisconsin Justice Department, which is investigating Blake’s encounter with police, he was shot in the back at point-blank range by a single officer, Rusten Sheskey, as Blake was leaning into the open driver-side door of his car, with Sheskey clutching his shirt.

Wisconsin Attorney General Josh Kaul told a news conference on Wednesday that Sheskey, a seven-year veteran of the police force, fired seven rounds in all. Blake’s lawyers say he was struck by four bullets, which shattered his vertebrae and damaged his stomach, intestines, liver and kidney.

Kaul also said investigators had recovered a knife from the front floorboard of the car, though Blake’s lead attorney, Ben Crump, said his client had no knife in his possession and did nothing to provoke or threaten police before he was shot.

Shockwaves from the events in Kenosha were felt across the United States as professional athletes, starting with National Basketball Association players, went on strike. President Donald Trump criticized the players’ boycotts on Thursday, saying the NBA had become “like a political organization.”

Democratic Senator Kamala Harris, who is running with former Vice President Joe Biden to unseat Trump in the Nov. 3 election, on Thursday praised the NBA players and addressed the shooting of Blake.

“It’s sickening to watch. It’s all too familiar. And it must end,” Harris said in a speech.

At a news conference on Thursday, civil rights leader Jesse Jackson blamed Trump for creating a culture in which police were encouraged to use excessive force.