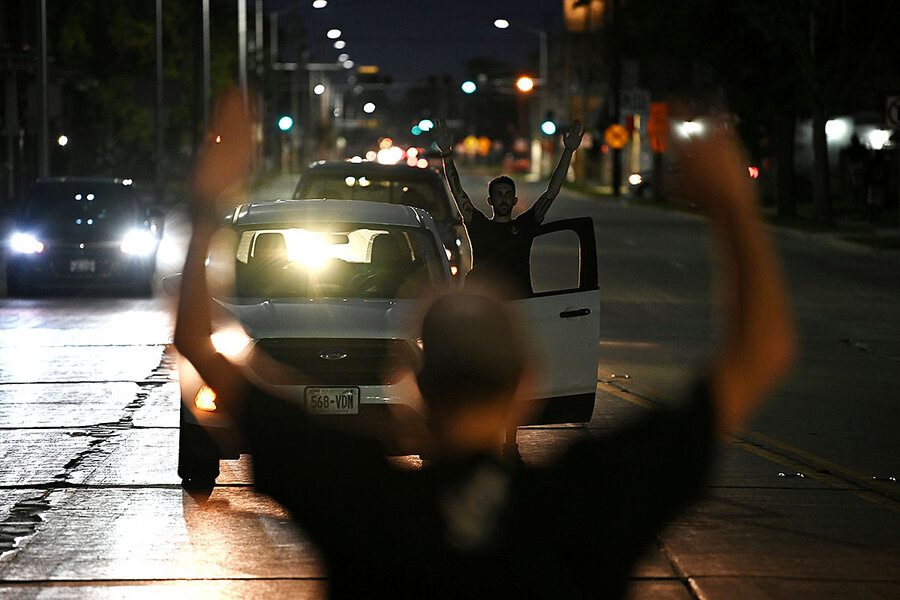 When Kalfani Turè was learning how to be a cop in Georgia nearly 20 years ago, the question of whether an officer could shoot a suspect in the back often sparked animated conversations in the police academy, he says, both within the classroom and without.

He and fellow cadets sat in lecture halls learning about the department’s liability issues, the particulars of Georgia’s use-of-force laws, and the 1985 Supreme Court decision limiting the use of lethal force on fleeing suspects only to those who “pose a significant threat of death or serious physical injury to the officer or others.”

“In the police academy – and I’ve attended three – all of that could become a bit dense for most to take in, so we just simplified it and said, ‘You don’t shoot a perp in his back,’” says Dr. Turè, now a professor of criminal justice at Quinnipiac University in Hamden, Connecticut.

Before becoming a scholar, he took five years to serve as a police officer in stints at state, municipal, and county sheriff police departments. “I wanted to have just a more informed and local insight into policing, as opposed to textbook knowledge,” says Dr. Turé, also a researcher at Yale University’s Urban Ethnography Project. And for him, “the ongoing tensions between police and the African American community – my community – continue to take place at the local level.”

But in the discussions at the police academies he attended, he also felt the weight of a more generalized code among those who carry firearms. “The second part of those discussions we had about shooting perps in the back was, it’s just cowardly. You just don’t do it.”

There has long been a certain stigma associated with shooting someone in the back in the United States, following a general code of honor or ethical principle of engagement that has hovered over the use of lethal force in a variety of contexts, experts say.

It’s also become one of the most wrenching focal points in the police shooting of Jacob Blake in Kenosha, Wisconsin, last Sunday. In the partial moments of the shooting captured by bystander videos, Kenosha Police Officer Rusten Sheskey, who has worked on the force for seven years, can be seen grabbing Mr. Blake’s shirt and shooting him in the back seven times, even as Mr. Blake’s three young children sat inside the car.

On Wednesday, the Wisconsin Division of Criminal Investigation announced agents had recovered a knife from the driver’s side floorboards of the car Mr. Blake was trying to enter as he tried to walk away, and observers such as Dr. Turè and others emphasize that these videos leave many questions unanswered.

And as a legal matter, there are in fact a number of contexts in which police officers are permitted to use lethal force against suspects who are trying to flee, especially when they believe the person poses a threat.

“It doesn’t mean for sure that officers did something wrong,” continues Professor Stoughton, who recently co-wrote a book that evaluates the complicated legal landscape surrounding an array of use-of-force rules throughout various states. “But it does mean we should look especially hard at the facts and whether that suspect really did present the type of threat that would justify the use of deadly force.”

Some states, including Florida and Mississippi, maintain a more permissive “fleeing felon” principle long enshrined in common law, which allows officers to use lethal force to prevent the escape of any kind of felon. Other states, however, limit the use of lethal force to specific felonies with threats of violence.

In Kenosha, it’s a “last resort”

In a civil case in 1985, the Supreme Court ruled that a Tennessee police officer violated the Constitution when he shot a 15-year-old in the back as he tried to escape arrest for stealing $10 from a wallet during a burglary. Setting the bar high, the 6-3 decision in Garner v. Tennessee held that a police officer must have “probable cause” to believe that a fleeing suspect poses “a significant threat of death or serious injury” before deciding to use deadly force.

The Kenosha Police Department’s Policy and Procedure manual echoes the high bar set in the Garner decision, stating that deadly force can only be used as “a last resort” when an officer has probable cause to believe the suspect fleeing “has used deadly force in the commission of a felony and the officer reasonably believes there is no other way to make the arrest.” Officers can also use deadly force when they reasonably believe the fleeing suspect is “intent on endangering human life” or “inflicting serious bodily harm.”

In 2016, the Massachusetts Supreme Court held that because of “the recurring indignity of being racially profiled,” Black men who run from police shouldn’t necessarily be considered suspicious. Simply avoiding contact with or fleeing from police officers “should be given little, if any, weight” when it comes to reasonable suspicion, the court said.

“It gets murky when you start talking about what a ‘reasonable officer’ would do in these circumstances,” says Ayesha Bell Hardaway, a former prosecutor in Ohio who now teaches law at Case Western Reserve University in Cleveland. As part of the “qualified immunity” also provided to police officers by federal courts, “we’re not allowed to second guess them or use hindsight to judge their behavior, but only base the determination of whether what they did was right or wrong within the bounds of their authority under the law.”

“I think, number one, that there’s obviously some merit to that position,” Professor Hardaway says of this Massachusetts decision. “But number two, when we get to this place where any sort of use of lethal force by an officer gets a pass, or is deemed to be acceptable, there’s really nothing that a Black person can do to find shelter or safety under the law. And I wonder whether mere Blackness in and of itself seems to justify any sort of fear or perceived threat.”

When he teaches civilians his noted self-defense techniques, victim’s rights activist Tim Larkin, a former military intelligence officer who helped redesign how special operations personnel trained for close combat, says the general ethical principle against shooting someone in the back is quite clear.

“To me, if somebody disengages or runs away, then that’s it – I’m done,” says Mr. Larkin, who has taught his self-defense techniques in a number of civilian, military, and law enforcement contexts. “I don’t pursue, I don’t keep shooting at their back, because I don’t have to.”

The job of police officers, however, is indeed to maintain order and ensure the safety of law-abiding citizens. In his view, more and more police departments are failing to train their officers how to physically control suspects with non-lethal methods, emphasizing instead tools such as Tasers. Officials said police attempted to subdue Mr. Blake with such means before he was subsequently shot.

“You have to learn how to effectively use the tool of non-lethal violence, because if not, the only option for these cops is to just shoot people,” says Mr. Larkin, who calls firearms “the remote control” for self-protection.

Like many who saw the bystander videos, Dr. Turè says he found himself a bit emotionally unsteady after seeing Mr. Blake shot in the back.

“I can tell you something that I know, and something that Black folk know,” he says. “There’s always an officer on your six, behind you, tapping at your sense of humanity, stoking the flames, if you will.”

“And so we exchange stories about negative contacts with police in passing and in stride because part of it is a release valve, to say, OK, this is an experience in community,” Dr. Turè continues. “But sometimes that release valve doesn’t work. Sometimes communities see these incidents, see a Black man being shot in the back, and they explode. And I think the subsequent civil unrest in the issue is just that kind of explosion.”