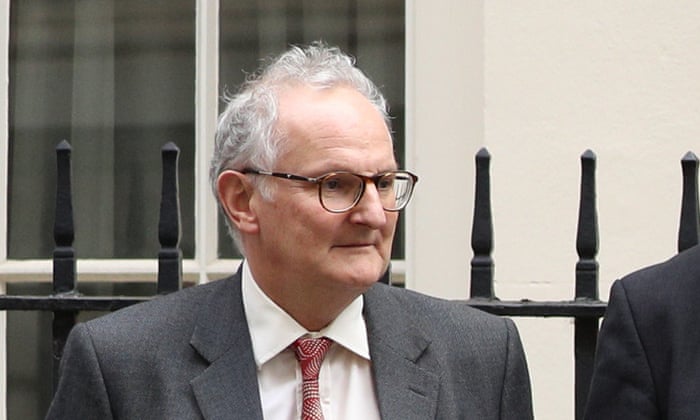 A Cabinet Office minister has relinquished control of shares worth £90,000 in an artificial intelligence firm after criticism that his ownership of the shares potentially clashed with his official duties.

Lord Agnew had faced criticism over his shares in Faculty, a firm that has gained extensive work in government since it was hired by Dominic Cummings to work for the Vote Leave campaign.

Campaigners had called on Agnew to sell off the shares because he oversees the Government Digital Service (GDS), which has overall responsibility for digital procurement.

The Cabinet Office said Agnew did not want to say why he had relinquished control of the shares when asked by the Guardian.

However, Agnew’s decision comes amid questions within the Cabinet Office over the department’s procurement process during the pandemic.

He was subsequently hired by Cummings, the prime minister’s chief adviser, to work as an adviser to No 10 on data and technology. Ben Warner’s brother, Marc Warner, is the co-founder and chief executive of Faculty.

Faculty’s government contracts were raised at a meeting of some Cabinet Office staff also attended by Ben Warner, Cummings and Alex Chisholm, the permanent secretary.

At the meeting, in June, Ben Warner was directly asked how he ensured that his senior government position “did not influence” the awarding of several contracts to his brother’s company. The Guardian understands that he did not answer the question. The Cabinet Office declined to comment.

Faculty has been awarded at least 14 Whitehall contracts in the last two years, collectively worth about £3m.

It was brought into the heart of the government’s response to the coronavirus crisis, conducting data modelling to help senior decision-makers and other officials respond to the pandemic.

Agnew has been one of two Conservative politicians among its shareholders. A financier who has been a government minister since 2017, he has owned Faculty shares for the past four years.

Agnew has stopped short of selling his shares in Faculty, as he has transferred control of them to a blind trust. This means that the trustees control the shares while he theoretically has no knowledge of how they manage them. He still gets any financial reward from the shares if, for example, the trustees sell them or manage them profitably.

It is an arrangement often used by politicians who could be criticised over potential conflicts of interests between their financial interests and public duties.

Spotlight on Corruption, the campaigners who had pressed Agnew to sell the shares, said while the minister had apparently recognised that he needed to take action, he had not gone far enough.

Daniel Beizsley, a spokesman, said: “Putting his investments in a blind trust is a fairly empty gesture and stops well short of removing the conflict of interest. He should be selling the shares altogether.

“Potential conflicts of interest like this need to be managed much more proactively and swiftly by the government to prevent public perceptions of sleaze creeping in, and to ensure the public can have confidence that ministers are impartial when awarding contracts.”

The government has said that Agnew has followed the appropriate procedures by declaring his shareholding in House of Lords register of interests and under the ministerial code of conduct.

Asked if he had transferred the shares in response to the calls to sell them off, a Cabinet Office spokeswoman said: “Lord Agnew has always followed the process set out in the ministerial code in declaring his personal interests.”

Agnew became a minister in the Cabinet Office and the Treasury in February, taking ministerial responsibility for the GDS, which works with official bodies to use digital technology to improve public services.

The government has said that he had no role in awarding any contracts to Faculty.

In a statement to the Guardian, Faculty has said its government work had always been obtained through proper procurement processes.

The Scott Trust, the ultimate owner of the Guardian, is the sole investor in GMG Ventures, which is a minority shareholder in Faculty.