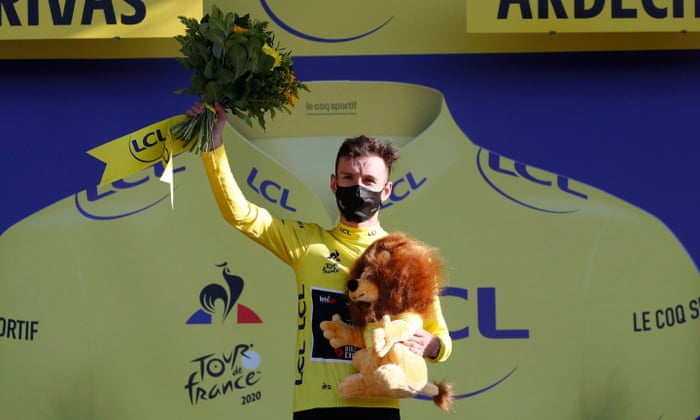 Adam Yates may have lived in the shadow of his identical twin and Grand Tour winner, Simon, for much of his career, but his unexpected tenure in the leader’s yellow jersey in the biggest bike race in the world, allied to his move to join Dave Brailsford’s Ineos Grenadiers in 2021, is likely to change that.

A bemused and bemasked Yates found himself clutching a Credit Lyonnais cuddly toy, clad in the maillot jaune of Tour de France leadership moments after Julian Alaphilippe of France was penalised for taking an illegal feed in the final 20km of the fifth stage of this year’s race, from Gap to Privas.

“It’s not the way I would want to do it,” Yates said of lifting the yellow jersey from the Frenchman’s shoulders. “I’d rather get it on the road, by taking time from my rivals rather than through a mistake.”

Alaphilippe’s error thrust Yates into the limelight, something which neither of the Yates twins, both of whom have achieved great success across European cycling, have ever seemed that much at ease with. Simon, winner of the Vuelta a España in 2018, just three months after a humiliating collapse when leading the Giro d’Italia, rides with his brother for the Australian Mitchelton-Scott team. Next year they will be rivals.

“We were probably about five minutes from the bus leaving,” his team manager, Matt White, said. “All the boys had showered and changed and we were not too far off pulling away when my phone rang from the Tour organisation and told me that Adam was in the yellow jersey.”

“I asked: ‘Why?’ and they just told me that Alaphilippe had picked up a 20-second time penalty. Then we looked up at the TV inside the bus and saw them replay him collecting a bottle inside the last 20km, which put us into yellow.”

Alaphilippe’s DeceuninckQuick-Step team claimed to be less than thrilled by the turn of events, although there were some in the race convoy who believed that the mistake had been made deliberately by his team to ease pressure on the Frenchman.

“It was a mistake,” his team manager, Patrick Lefevere, maintained. “It’s hard to accept. Losing the yellow jersey isn’t a good thing and maybe he can fight to get it back, but I ask myself where and when. We wanted to keep it for as long as possible.” 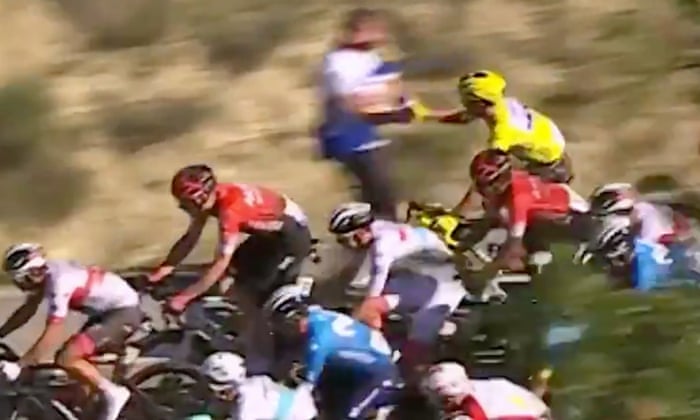 White added: “We had a tactic to go after the yellow jersey and if Adam hadn’t been in second place then somebody else would have got it. So the moves that Adam made on the first day, and the way that the team have been riding to protect Adam in this first week, have enabled us to benefit from the bad luck of somebody breaking the rules.”

While the race lead changed hands, the dominance of the Jumbo-Visma team continued with Wout van Aert taking the stage victory, just 24 hours after his team leader, Primoz Roglic, had won a ski-station finish at Orcières-Merlette.

“It was a heavy finish,” said the 25-year-old, also winner of this year’s Milan-San Remo classic, “but it was maybe the most easy stage I ever did in a bike race because there was no breakaway, not a high pace at all.”

The Belgian won the stage, outsprinting the Dutchman Cees Bol in an uphill finish to the Ardèche town, as a gusting mistral blew across the Rhone valley and livened up a pedestrian 183km stage that was ridden, for much of the distance, at cycle touring pace.

“The last hour was really hectic, with a lot of wind, as all the GC teams wanted to be in front. The last kilometre was slightly uphill, so I knew that this was a stage that suited me, and I was just so happy that I got the opportunity from the team to go for it.”

Sam Bennett’s third place in the stage was enough for him to take the leadership in the points classification to become the first Irishman in over 30 years to pull on the Tour’s green jersey.

Yates will enter his preferred terrain, the steepest mountain climbs, for his first day defending the yellow jersey, when the stage takes the peloton to the finish at Mont Aigoual in the Cévennes. He leads by three seconds and it is likely to be one of the 2020 Tour’s pivotal moments.“Look, this is the biggest race on the calendar so we’ll take the yellow jersey and keep it for as long as we can,” White said. “Mont Aigoual is a stage that Adam would have wanted to target anyway, and the winner will be one of the best climbers here. At the moment, he’s in that elite group.”

Donny van de Beek to Manchester United: Where will he fit in?