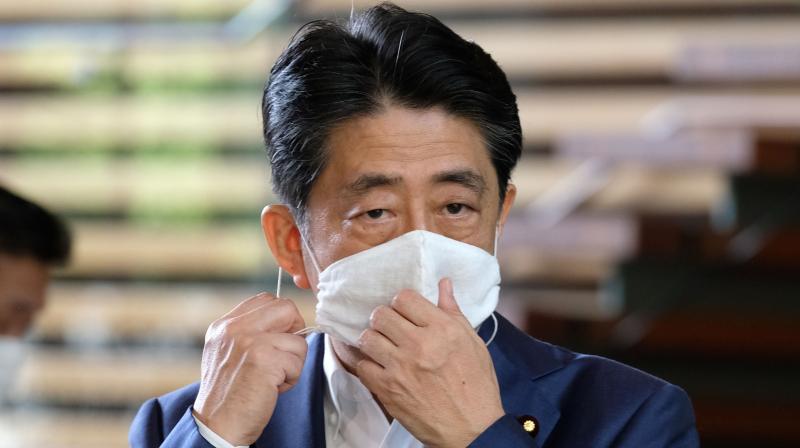 Tokyo: Japanese Prime Minister Shinzo Abe visited a Tokyo hospital on Monday for a second time within days, stoking concern about his ability to stay on as leader due to health issues and fatigue from tackling the coronavirus pandemic.

The visit came as Japan’s longest-serving prime minister surpassed a record for longest consecutive tenure as premier set by his great-uncle Eisaku Sato half a century ago, adding to speculation Abe could resign after reaching the milestone.

Abe, criticised for his handling of the virus outbreak and several scandals, has suffered a slide in voter support to one of the lowest levels since returning to office for a second term in 2012 with promises to revive the economy and bolster defence.

Government spokesman Yoshihide Suga said Abe was at the hospital for the follow-up to a medical check a week ago when his examination lasted 7-1/2 hours, fuelling worries about his health.

But major broadcaster Nippon TV said Abe was being treated for a chronic illness rather than a check-up, citing multiple unidentified government and ruling party sources. It added that Abe was scheduled to go to his office in the afternoon.

“I was informed that he’s getting an additional exam after last week’s exam,” Suga, who is also the chief cabinet secretary and is seen as one of the main contenders for Abe’s job, told a regular news conference.

“The premier himself said the other day that he wanted to return to work.”

Abe has been prime minister since 2012 in his second stint after a troubled term in which he resigned abruptly in 2007, because of struggles with ulcerative colitis, a disease he now keeps in check with medicine that was not previously available.

His office did not give a detailed explanation for the hospital visits, but close aide Health Minister Katsunobu Kato said last week’s visit was a regular check-up and he was “not at all” worried about Abe’s health.

Japanese media have speculated about Abe’s health this month, including detailed reports on his walking speed.

Weekly magazine Flash said Abe had vomited blood at his office on July 6. Reuters was unable to verify the widely cited report, which was denied by government officials.

Abe gets a regular check-up twice a year, with his most recent on June 13, Kyodo news agency said, adding that last week’s visit was a follow-up to a June check-up, citing a hospital source.

If Abe is incapacitated, Deputy Prime Minister Taro Aso, 79, who doubles as finance minister, would take over temporarily as acting prime minister.

If Abe says he has decided to resign, he would stay on until formally replaced, which requires a ruling Liberal Democratic Party presidential election, followed by the winner’s formal election in parliament.

Abe’s tenure as LDP president, and thus, premier, ends in September 2021 unless he steps down earlier.

All are veteran LDP lawmakers unlikely to make huge policy shifts, despite differing over details.

But any successor may find it tough to emulate Abe’s political longevity, which followed years of revolving-door premiers and was aided by the strong economy, tight control over bureaucrats and weak opposition parties.