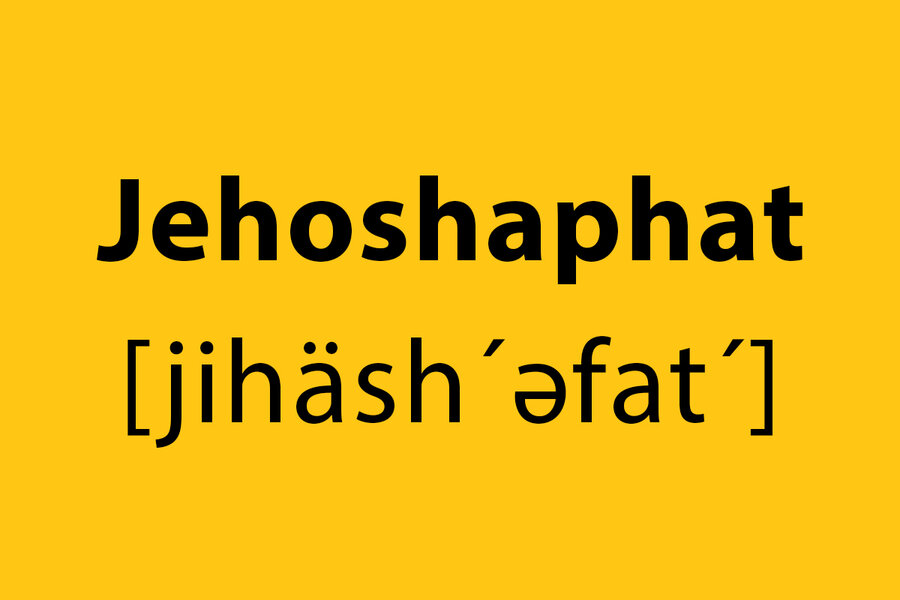 Where does the expression “jumpin’ Jehoshaphat!” come from? A reader wrote in to ask, and I had a lovely time trying to figure it out. No one is sure how Jehoshaphat’s name ended up in this interjection, or why he’s jumping, but there are several interesting possibilities.

This mild oath first appeared in a novel from 1866, when a cowboy-backwoodsman used it to convey his surprise and admiration at how far a horse (and its beautiful rider) had jumped: “By the jumpin’ Geehosofat, what a gurl she air sure enuf!” It later became a favorite saying of cartoon cowboy Yosemite Sam, the adversary of Bugs Bunny.

Jumpin’ Jehoshaphat! (and just plain Jehoshaphat!) originated in the United States during the 19th-century craze for “minced oaths,” pseudo-swearwords that replaced profane or blasphemous words with inoffensive ones. These not-quite oaths could be quite poetic: They rhymed (holy moly!), used alliteration (jumpin’ Jupiter!), and were fun to say (gee willikers!). Jumpin’ Jehoshaphat follows suit.

The Jehoshaphat in question is the biblical king of Judah. It might seem odd to refer to him as “jumping,” since he is best known for standing still. In 2 Chronicles, Judah is threatened with invasion, and Jehoshaphat and his people pray to God for help. The Lord tells them, “the battle is not yours but God’s … take your position, stand still, and see the victory of the Lord on your behalf” (20:15, 17 New Revised Standard Version). The Judeans emerge victorious. One might not expect the steadfast Jehoshaphat to begin leaping around, so jumpin’ Jehoshaphat! might carry extra force, meaning something like “I’m as surprised as if King Jehoshaphat started jumping!”

Looked at another way, though, Jehoshaphat and jumping go hand in hand. The king appoints men to sing and to praise God as the soldiers march to meet their enemies. Such prayer may well have involved leaping and dancing, since leaping is associated with joy and the praise of God across the Bible. In the Song of Solomon, the beloved comes “leaping upon the mountains, bounding over the hills” (2:8); David uses the metaphor of jumping to credit God for his success: “by my God I can leap over a wall” (Psalm 18:29). And Christ Jesus tells his followers that if the world curses them, they should “rejoice … and leap for joy” for their “reward is great in heaven” (Luke 6:23). One of the Greek words the New Testament uses for rejoice is agalliao, which comes from roots that mean literally “much” and “jump.”

If I had to choose the expression’s most likely origin, I’d say that 19th-century Americans were trying out different words for mild oaths, and that jumpin’ Jehoshaphat! was both appropriately biblical and fun to say.