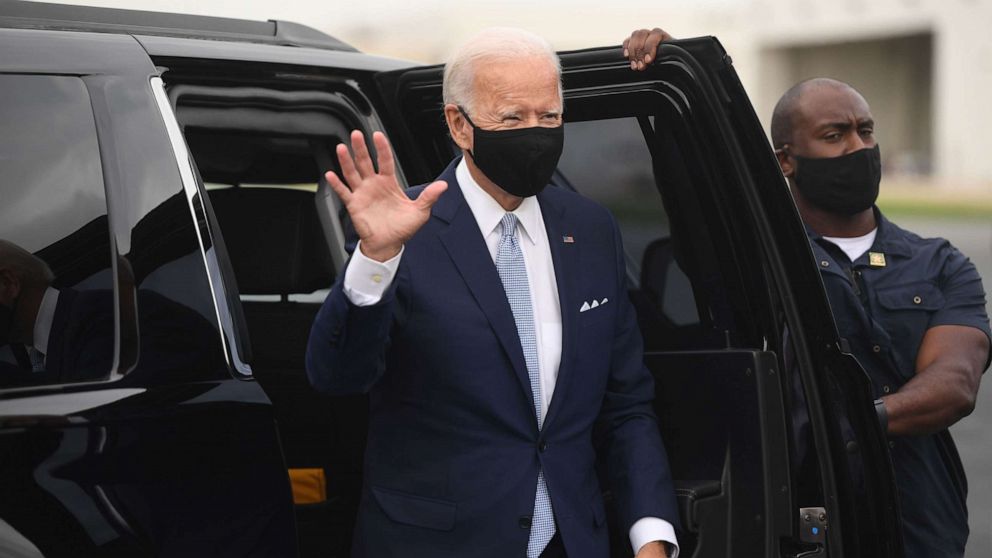 Former Vice President Joe Biden was searing and direct in taking on President Donald Trump on Monday, in a speech condemning rioting and looting and also saying that the president “fans the flames” of hatred and violence.

But his strongest counter to Trump’s rhetoric may have come when Biden was describing himself.

“You know me,” Biden said. “Ask yourself, do I look like a radical socialist with a soft spot for rioters? Really?”

With Trump set to travel to Kenosha, Wisconsin, on Tuesday — despite pleas from Wisconsin’s governor that he stay away — the extent to which Trump wants and even needs Biden to be someone he’s not will be on display.

“They want to destroy our country,” Trump said at the White House.

It remains awkward for Trump that his depictions of what a Biden presidency would bring rely heavily on things that actually have come under a Trump presidency. He goes to Kenosha Tuesday with a stated agenda of quelling unrest, yet he has passed up numerous opportunities — including a few questions on Monday — to condemn violence committed by people whose politics align with his own.

Trump’s attacks on Biden, meanwhile, are focused extensively on those who are politically closer to Biden than they are Trump. Biden is rejecting that — and relying on his long familiarity with voters to help him make that case.

There is, of course, a broader sense in which who Biden isn’t matters to this campaign. He is not Trump, and an election the president needs to be a choice could still be a referendum.

While national headlines may have pivoted to conventions, protests and school re-openings, quietly millions of Americans continue to face extreme, day-to-day economic hardship.

Tuesday, of course, is especially stressful for families with rent payments again due, though so many jobs have not yet returned.

For months, housing experts have worried the economic downturn and unemployment spike could lead to a wave of evictions and homelessness. In a recent report, analysts warned “an estimated 30–40 million people in America could be at risk of eviction in the next several months” unless new government protections are put in place.

Over the summer, eviction moratorium guidelines put in place from Congress expired, and, as the weeks ticked by, many state-level orders lapsed too. Monday, Nevada’s governor extended his state’s renter protections, but Pennsylvania’s governor did not re-up his previous executive order, and so the moratorium on evictions and foreclosures there ended Aug. 31. He argued he needed Pennsylvania’s legislature to act.

Democrats in the House passed a bill that would provide tens of billions of dollars in renter assistance and stop most evictions in federally assisted properties for a year. The president’s recent executive order on housing, signed in early August, seemed to express support for similar measures to help renters, but did not actually call for concrete action or additional money. No new bill has been signed into law.

Marking the first of the month, protests are planned in more than a dozen cities from New York to Little Rock, Arkansas, on Tuesday. Activists want evictions halted and debt accrued from missed rent payments canceled.

All eyes are on Massachusetts Tuesday as voters are set to decide a competitive Senate primary. But down the ballot, party divisions are playing out in the 1st Congressional District, where House Ways and Means Committee Chairman Richard Neal is vying to keep his seat amid a challenge from progressive-ally and Holyoke Mayor Alex Morse.

​ The race was embroiled in scandal weeks ago after the Massachusetts College Democrats — who are backing the House incumbent — reportedly made an attempt to discredit the mayor with allegations of impropriety. Morse denied said allegations, and Neal denied any knowledge of the effort against Morse.

It’s set to be another showdown between a more moderate, establishment-backed candidate like Neal, who has the support of House Speaker Nancy Pelosi, and Morse, who has been endorsed by Rep. Alexandria Ocasio-Cortez and her PAC, along with a slew of other progressives and the Justice Democrats group.

The stakes for the contest — the last major chance for progressives to knock off a senior Democrat — couldn’t be higher, given Neal’s role leading the tax-writing committee that could play a major role in setting the agenda with a Biden administration. A win for Morse wouldn’t just be another notch in the belt for progressives, but also a powerful symbolic victory for their vision of Democrats’ governing agenda.

ABC News’ “Start Here” Podcast. Tuesday morning’s episode features ABC News Senior National correspondent Terry Moran, who previews President Donald Trump’s trip to Kenosha, Wisconsin, Tuesday amid unrest there and across the country. ABC News’ Jordana Miller joins us from Jerusalem to tell us about the first official flight from Israel to the United Arab Emirates. And, ABC News Political Director Rick Klein tells us why a member of the Kennedy political dynasty may have trouble winning in Massachusetts Tuesday. http://apple.co/2HPocUL

FiveThirtyEight Politics Podcast. There’s been media speculation over the past week that unrest in places like Kenosha, Wisconsin, and Portland, Oregon, could reshape the presidential race and hurt Democratic nominee Joe Biden. The FiveThirtyEight Politics podcast crew discusses why there is not yet evidence to back up these assertions. They also preview Tuesday’s Democratic Senate primary race in Massachusetts between incumbent Sen. Ed Markey and Rep. Joe Kennedy III. https://apple.co/23r5y7w