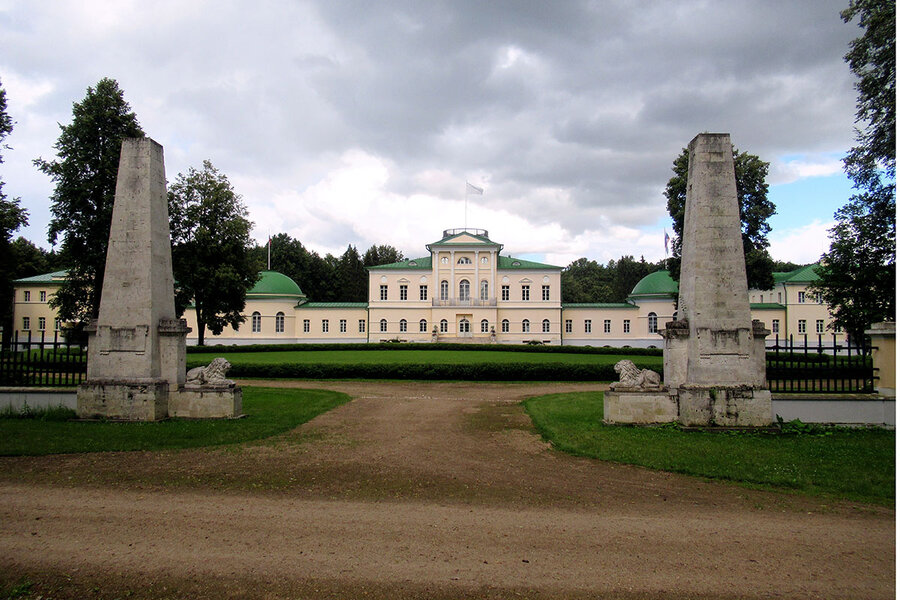 A huge, glittering aristocratic palace, surrounded by rambling gardens, quiet forests, and well-stocked fishing ponds was once a fairly common sight in the Russian countryside, at least in czarist times. Always nearby would be the impoverished villages of peasants who toiled on the land, provided servants for the great house, and soldiers for the czar’s army.

But a century ago, amid revolution and civil war, the owners of these extravagant estates fled, leaving their lavish homes to be burned, swallowed up by the forests, or used as stables or storehouses for collective farms.

One of those was the estate of the Kurakin family, who lived in a lavish, sprawling palace at Stepanovskoye-Volosovo for almost 200 years before that last members of the clan were evicted by the Bolsheviks in 1918. The main building was used as a mental health facility for much of the Soviet period, gradually decaying until its main wing burned down in 2005.

He spent years navigating the murky legal environment with the aim of purchasing the ruined estate and, once he acquired title, began pouring in millions of dollars of his own money to restore the palace and its grounds to its former 19th-century glory. Today, though he and his family often live there, he has opened it up to the Russian public, thousands of whom have been coming over the past couple of years, mainly in day trips from Moscow. Notes in the visitors’ book express appreciation, wonder, curiosity, and none of the old Soviet-era hostility to the idea of a magnificent, privately owned palace that’s stuffed with valuable art works.

“You can’t just call this a ‘restored estate,’” says Vadim Razumov, a blogger and photographer who documents the condition of some 80,000 pre-Revolutionary noble estates in Russia.

“What Sergei Vasiliev did was to restore it as a living estate that produces its own food and generates a way of life. He didn’t build a fence around it, but opened it for people to come and experience a piece of history. … In Europe there are places like this, old castles and estates that have found a new public purpose, but this is a whole new thing in Russia.”

The Soviet regime turned a few czarist palaces into museums or art galleries, so that people could come and view the extreme luxury in which their former masters had lived and, at least symbolically, regard it as their own. It was not an unpopular aspect of Soviet life. But in the economic and political turmoil that followed the USSR’s collapse, almost no one gave much thought to the thousands of decaying manorial estates whose remains still dot the Russian countryside.

Only recently has it even occurred to anyone to try counting them. A recent effort by culture officials in Tver region, which lies between Moscow and St. Petersburg, found that of the 1,230 noble estates that had existed in the province in 1918, only 133 are still in any shape to be registered as worthy of state protection. Of those, just eight are in “satisfactory technical condition.” Officials in Tver say they have no funds for reviving any of these objects, and the only hope is to attract private investors. And the positive example they cite is the Kurakin estate.

The Kurakin family produced several leading diplomatic lights during the 18th and 19th centuries. But if the name sounds vaguely familiar even to those not well versed in Russian diplomatic history, it may be thanks to the great Russian novelist Leo Tolstoy, who was fond of fictionalizing the preeminent aristocratic families of his world by slightly altering their name. A notable character in War & Peace is the roguish Anatole Kuragin, who wreaks a great deal of mischief in Russian high society along with his sister, the beautiful but calculating Helena Kuragina. That’s a fun fact that actually draws visitors to the restored estate today.

Photos from a decade ago show the former palace a dilapidated and thoroughly-looted wreck, with fire-scarred walls, weeds growing from the floors, and an earthen ramp where the grand entrance had been. Mr. Vasiliev, working from archival materials like letters and diaries of people who attended parties at the palace in its heyday – and making a lot of educated guesses – has restored dozens of rooms, corridors, and the grand staircase to their former appearance.

“I have no aristocratic roots. I was a regular Soviet guy, who graduated in 1990 as an aeronautical engineer,” says Mr. Vasiliev. “I became a successful investment banker and there was a time, before the global crisis of 2008, when it seemed like you could put money into anything and it would grow. That’s when I got the idea to rebuild this place. But even after the crisis, when things were tougher, I didn’t put it on pause. A project like this lasts a lifetime. Once you begin, you can’t stop.”

He and his family have scoured antique shops and flea markets in Europe to find compatible furniture, knick-knacks, drapes, and carpets. The art works adorning the walls are copies of ones that might have hung there, including a complete set of lithographs painstakingly re-acquired from a 19th century list found an old archive. The grounds, including an apothecary garden, ponds, gazebos and quiet forest paths, have all been brought back and, on a summer weekend, are full of curious tourists.

The rebirth isn’t confined to the estate grounds, says Mr. Razumov. “The surrounding villages are coming to life, because it provides jobs. Tourists are coming, and in future we might see hotels, restaurants and other services flourishing all around.”

Olga Murashova, from the neighboring village of Dorozhaeva, says many local people have found work in the restoration project, and she herself earns good money giving guided tours of the estate to visitors who wish it.

“You can’t believe what it was like around here before,” she says. “Mud, desolation, everything overgrown with weeds and brush. The only inhabitants were moles.  There wasn’t much work to be found. So, are people happy about what Sergei Anatolyevich [Vasiliev] has done here? Of course we are.”

“Bigger than a piece of family property”

“I had originally thought of this as a country retreat for my family, but my ideas changed as the project developed,” says Mr. Vasiliev. “I learned the history of the place, and the family that had occupied it. And as I delved into that, I got drawn into the parade of Russian history that they were so closely connected with.

“The palace is huge – about 32,000 square feet – and it took years to restore. As I worked at it, I came to the realization that you just can’t close something like this off, it needs to be open to people,” he says. “It’s not that the state ordered me to do anything, I just knew that it’s something bigger than a piece of family property.”

That’s not a common attitude among Russia’s new rich, but it may be creeping up on them. In Russian cities, old gems of architecture have long since been restored, almost exclusively for commercial purposes, and that process has changed the outward appearance of even many smaller provincial towns over the past couple decades. But the fate of decaying pre-Revolutionary countryside manors is more troublesome: They tend to be bottomless money-pits, with minimal commercial potential.

“There are plenty of examples in Europe, where you can buy a ruin and take your time deciding how, or whether, to restore it,” says Dmitry Oynas, an adviser on property issues for Russia’s Ministry of Culture. “In Russia, the state still places too many conditions on new owners, and requires them to restore the property within 5 years. But not everyone is Sergei Vasiliev.”

Still, he says, in the past few years there has been a growing trend to purchase and renovate old houses, not just of the grand residences of the aristocracy but also homes of the merchant and rich farmer classes in czarist Russia.

“People are becoming aware of the tourist potential of these old structures, and the fact that they still have utility. When they’re fixed up, they still make great homes,” he says. “And the larger society doesn’t reject the idea of such property anymore. People have accepted the principle that an owner is someone who bears responsibility for these objects, even while the public regards them as its own general heritage.”

As for Mr. Vasiliev, he plans to carry on restoring the estate, to extend its farmlands and perhaps revitalize some of the craft industries that used to thrive here, such as linen, cheese, bricks, and beer that was sold as far away as Moscow.

“I am not interested in profit, but I’d like the estate to become self-sufficient,” he says. “I’ve looked at some European examples, so I know it’s possible. I don’t want the state to give me anything.

“But, well, they could improve the local infrastructure,” he adds. “The roads leading here are terrible, and the only bridge giving access to the estate was built by inmates of the mental hospital after World War II. Yes, I wish the government would fix the roads.”

‘Proof without doubt’ that Navalny was poisoned, says Germany

Migrants trying to reach Europe squeezed by pandemic and the sea