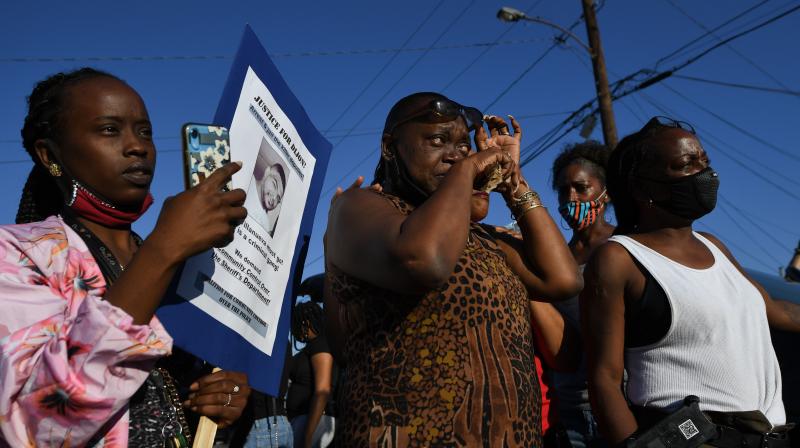 Los Angeles:  A Black man who was stopped on his bicycle for an alleged “vehicle code” violation was shot to death on Tuesday.

A semiautomatic handgun apparently fell from a bundle of clothes that the man, identified as Dijon Kizzee, 29, had been clutching and dropped when he struck an officer in the face, said Lieutenant Brandon Dean, a Los Angeles County sheriff’s spokesman.

Dean said the two officers opened fire when Kizzee made “a motion that he’s going to pick up the firearm.”

“Whether the firearm was actually in his hand, if he was motioning towards it, I don’t have those specifics because we haven’t interviewed the actual deputies who were there yet,” Dean said.

Initial news of Monday afternoon’s shooting drew scores of angry demonstrators to the scene of the Westmont community on the southern edge of Los Angeles, becoming the latest flashpoint in a summer of protests over African-Americans killed at the hands of police.

“You don’t kill any race but us, and it don’t make any sense,” Fletcher Fair, Kizzee’s aunt, told reporters on Tuesday at the shooting scene, where activists called for an independent investigation by California’s attorney general.

A protest march was being organized for Tuesday evening by local activists from the Coalition for Community Control Over the Police.

Prominent civil rights attorney Ben Crump, who was retained to represent Kizzee’s family, posted on Twitter: “They say he ran, dropped clothes and a handgun. He didn’t pick it up, but cops shot him in the back 20+ times then left him for hours.”

A neighbor who said she watched the scuffle and the shooting that followed from her home directly across the street from the scene told Reuters on Tuesday that she never saw Kizzee throw a punch, never saw a gun, and that he “wasn’t a threat.”

Deja Roquemore, 31, said the two deputies kept firing at Kizzee even as he lay motionless, face down, on the ground.

“I watched him go from living, to dying to dead,” Roquemore said in a telephone interview. Roquemore, who is home during the day overseeing her 6-year-old’s online school lessons, said she was interviewed by investigators.

Dean told Reuters that the deputies, together, fired a total of 15 to 20 gunshots. He said Kizzee sustained several wounds to his upper torso, but the number of bullets that struck him would not be known until an autopsy was performed.

The two officers involved have been removed from patrol duty for the time being, he said.

According to Dean, events leading to the shooting began when the deputies saw a man, since identified as Kizzee, riding his bike “in violation of the vehicle code” and tried to stop him.

Kizzee jumped off his bike and darted away on foot, before the two officers caught up with him a short distance away, where the deadly encounter occurred.

In the version of events given by Roquemore, she said she witnessed Kizzee and one of the officers “tussling” over the clothes bundle before it fell to the ground.

At that point, she recounted, Kizzee threw both hands in the air, yelling, “I don’t have anything. What do you want?” before turning to run away. She said an officer then fired a Taser into Kizzee’s legs, and the two deputies gunned him down when he pivoted back toward them.

Dean denied that officers ever deployed a Taser, and he offered no explanation for the differing accounts.

Dean said he did not know what vehicle code Kizzee was suspected of violating. He told reporters on Monday: “It is not uncommon for deputies to conduct vehicle stops of bicycles. They have to adhere to the same rules of the road as a vehicle does.”