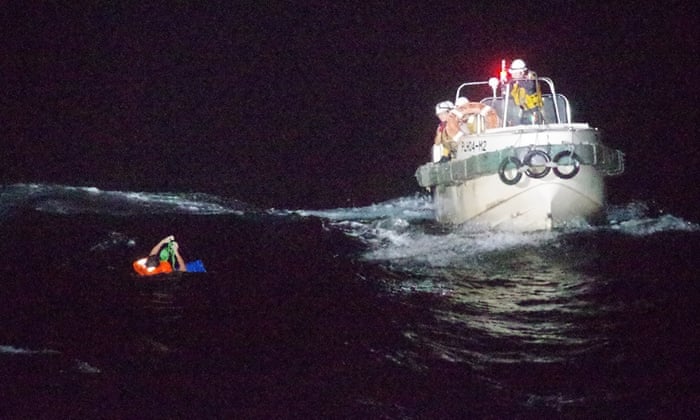 The last time the captain of the Gulf Livestock 1 spoke to his partner, Typhoon Maysak was battering the ship and water was already flowing in. It was 8.30pm on Tuesday.

“He informed her that water had entered the ship. The last thing he said was he will go to the bridge to check the situation,” Maya Addug-Sanchez, the captain’s sister, told the Guardian. Addug’s family hasn’t heard from him since.

“We were so worried because we know they were in the middle of the sea and there was a typhoon. We saw in the news that he sent a distress call. I don’t know anymore what happened,” Sanchez said.

The cargo ship was en route from New Zealand to China when it went missing on Wednesday. It was carrying 43 crew – 39 of them from the Philippines, two from New Zealand, and two from Australia.

A rescued crew member has told the Japanese coastguard that the ship sunk on Wednesday. On Friday a search for the missing crew was ongoing.

Sanchez said her family was desperate for news. “It’s agonising. It’s been two days already. We’ve done nothing but to wait for updates and pray, pray, pray,” she said.

“I just received news that bodies of dead cows were found. That’s the only thing we know. We need information and updates,” she added.

One survivor was rescued by Japanese coastguards on Wednesday and another man pulled from the water on Friday died.

Captain Addug, 34, is the youngest of a family of nine and has five children under six. Sanchez said they tried to keep the news from their parents at first to protect them.

She said she was holding on to the commitment of the Japanese government that it was conducting a massive search for her brother and his crew. “We need prayers,” she said.

Sanchez said she was also counting on the resourcefulness of her brother, that he might have found a way to rescue himself and his crew before the ship capsized.

“He sent a distress call. All ships with radar in the area must have received it. We don’t know. Other ships might have rescued them,” she said.

Addug is youngest to become a captain from the province of Ifugao in the northern part of the Philippines, where many become seafarers.

“He’s really good. He wouldn’t be a captain that young if he wasn’t good,” Sanchez said. His crew always praised him. He’s good. He’s kind. You’ll see their posts. They say: ‘He’s the best captain we’ve ever had’.”