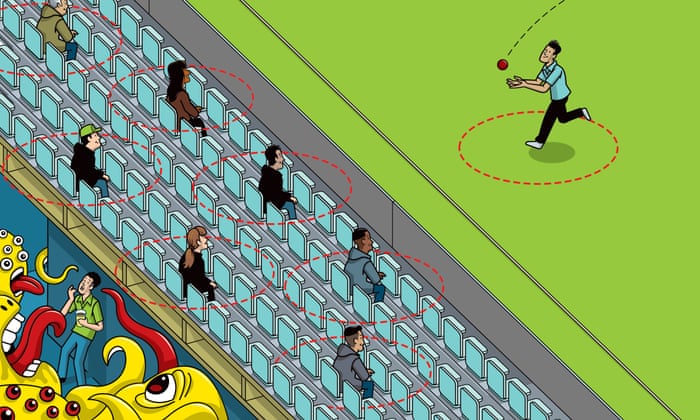 “They choppered in the T-bones and the beer and turned it into a beach party. But the more they tried to make it like home, the more they made everybody miss it.”

It was the sound that really got you. The delivery was slightly over-pitched from Shaheen Afridi, bounding in a little wildly from the Pavilion End. Will Jacks is a tall batsman. He didn’t move much, just leant forward from the knees and flashed his wrists through the line of the ball with a controlled kind of violence.

First came the crack of the bat. Then, as necks craned and heads swivelled, there was the cheer, something soft and deliciously moreish, tickling your ears, running its feet up and down your spine, entering the body in a warm chemical rush.

Oh, that noise! Earlier on Rory Burns had taken a brilliant running catch on the square leg boundary and there was a kind of whoosh around the ground, like a gust of warm air.

A little later Hashim Amla lofted Afridi over mid-off and there it was again, that shared gurgle of pleasure, the sound of a sporting crowd speaking to itself. Albeit, as the night wore on there was something else too, a kind of sadness, like peering in through the window at someone else’s family Christmas.

Nobody really knows what to expect from these test events. Surrey versus Hampshire in the T20 Blast at the Oval on Thursday night was another stage in the joint efforts of government and sporting bodies to trial the return of live crowds.

This is frontier territory for everyone involved, and huge credit must go to Surrey’s administration and stadium staff, who did a fine job of the logistics. There was spread seating, carefully laid lines of traffic, discrete family bubbles, sanitising stations, informed stewarding.

For long periods it was easy to lose yourself in the spectacle. Looking down from high in the 1845 Stand, watching 2,500 county members sit close but not too close, feeling the hospitality furnaces fire, the engines of London’s largest summer beer-processing machine begin to turn, it was even possible, if you squinted a little, to see some workable version of the new secure sporting reality.

At which point the rain began to fall, arriving in a haze over the lip of the stand. The bodies below headed for the safety of the Oval’s covered walkways, coalescing into a single mass as they reached the stairwells. And looking down I noticed a large, semi‑transparent, woodlouse-shaped viral germ, about the size of a man’s fist, crawling across my laptop keyboard.

This was the bad moment. Like so much of the current adapted chaos, it’s really no one’s fault. But at the rain break you felt the limits of this delicate construct. 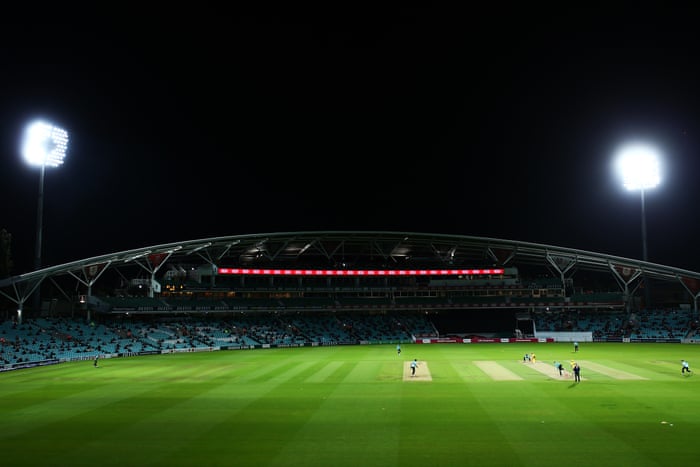 The problem here isn’t a lack of planning or good intentions. It is instead the basic incompatibility between fear of contagion in mass gatherings, and the fact sport demands mass gatherings, not reduced or controlled gatherings, to make any kind of economic sense.

Plus of course, there is the problem of human behaviour. At the Oval people tried to stay distant as they drank pints and ate chips and milled awkwardly, swaying back from the large, silvery fish-like germs chugging in semi-visible airborne schools from one end of the covered walkway to the other.

At the bar a group of men in cagoules shook hands with another group of men in cagoules, each tucking a large, writhing eel-shaped germ into the other’s top pocket for later. A little later, I bumped into someone I went to college with and we laughed about how odd it was nobody was social distancing, all the while standing six inches apart, the large, translucent catfish-like germs on our shoulders entwining their tentacles and licking their fat grey lips.

We know also the wheels of industry must turn again, the limits of the possible must be pushed back. And that some element of our shared morale is dependent on being able to gather together – to offer, through sport, a show of human resistance.

But our sporting spaces are not designed for this. Plus, humans are forgetful. Humans crave the warmth, the shared cheers, the contact. Humans don’t want to stay distant.

It is important to decide which way to jump. Plans are in place for 20,000 spectators at Twickenham, perhaps even for football crowds of up to 30,000. Either UK sport needs to decide it’s telling us these gatherings are simply a managed risk for those who attend, accepting that the pretence of distancing and public hygiene in shared areas is simply this.

Or we need to become stricter, because at the moment we’re heading for a kind of fudge, a halfway-house that will simply collapse in larger numbers.

Some simple rules might help. Probably, everyone should be asked to wear a mask in those cramped communal spaces. Food concessions and the like should be sacrificed. Strictly staged entry and exit points have worked in other countries.

The Oval was just about workable at hugely reduced capacity. It will remain a fond memory of a grisly summer for everyone who was there. Like the US soldiers in Apocalypse Now, cooking T-bones and talking about surfing on the bullet-ridden beaches of Vietnam, this felt like a vision of home. Just not one we’re likely to see any time soon.