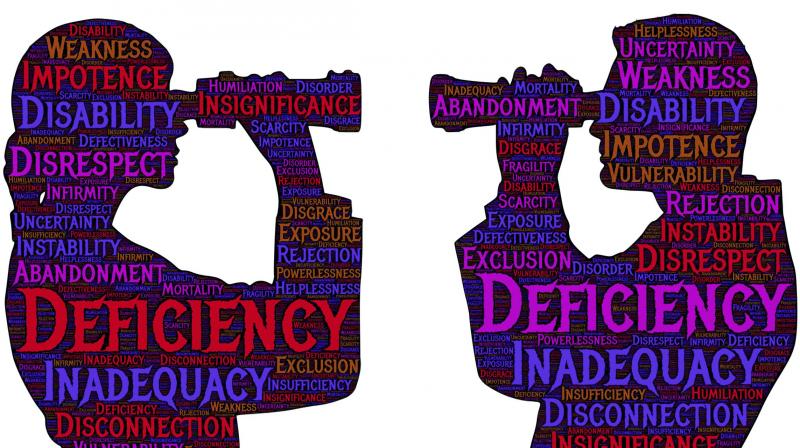 There’s enough insecurity going around these days, and while it can get
crippling, the key lies in self-belief, self-affirmation and essentially the age-old ‘love thyself’ formula

Isn’t insecurity inextricably linked with low self-esteem? All of us, however great we may be, grow up with fears. Life is a lot about overcoming these uncertainties, frights and imagined dreads and moving ahead despite and inspite of the apprehensions. About conquering the slew of possibilities in an overactive imagination of negative events before you start a mission, events that may never occur. This trepidation and lack of trust upon our own selves and our life is often a limiting factor in achieving goals and happiness and is what largely constitutes insecurity.

If you were to ask me, I’d say that I’ve spent a large part of my time surmounting the hits I’ve had and the fall-out repercussions on my personality. Very early in life I had to deal with more than my mind could wrap itself around and growing up was also about working through the impacts of the dreads, doubts, and nightmares these episodes caused. And then later in life it was about going back with myself into my life and seeing the challenges I overcame and allowing myself to work on my strengths and growing my potential a little at a time rather than blaming myself and allowing myself to feel unworthy and inadequate. Cut yourself some slack in life and that takes you a long-long way ahead.

We are not the same people; each one is different in aptitude and achievement. The key is to see yourself as a unique individual and work from there. Rather than comparing yourself to others and feeling demotivated, work from your own limitations and strengths. It is a special journey when you are able to have a dialogue with yourself rather than going on social media and feeling frustrated at other people’s achievements and life path. Comparing is the most defeating and demotivating thing that can make you feel inadequate and incapable. Instead, compare yourself with your own self some years ago and work from where you’ve come. You might just feel proud of the path you’ve travelled. To be realistic about your own life path and indulge in some positive reaffirmations is a great start toward beating downfalls and years of insecurity.

In the journey of changing one’s life and improving one’s self-image, in our quest to beat insecurities, fears, self-worth issues, lack of confidence — all of which are part of the same growth path most of the world deals with, a great start is to kill negative patterns. Patterns and habits that have become parts of our lives.

Start your day with gratitude and positive affirmations. Bad habits like aggression, jealousy, envy, anger, comparisons are to be worked on with patience and persistence. Habits acquired over years cannot be done away with in a day. It is a long journey toward unlearning all the habits we took years to acquire. If one is set on change, it takes much strength and desire to begin the change, but it is a positive and fabulous journey toward a newer happier existence.

A great way to work with yourself is inspiring yourself with positive self-affirmations. The energy field created is in itself an elixir and builds the bridge to successful self-image and subsequent win-win communications. Why do some people have an air of upbeat optimism and some just exhaust you when you meet them? This is the difference between an individual who has worked around his fears, insecurities, and anxieties in life and a person who has given in. In this path the role of self-acceptance and self-affection plays a great role. For example, if you are not size three, life cannot be an endless journey of reproach, recriminations and low self-confidence. If you are not five eight and a model, or a man is not six feet, he cannot change that. He can learn to love himself and she can enjoy being petite. Like I said before, old habits of nagging yourself, picked up from pesky people who made you feel bad about yourself, have to be shaken off. It could even be your parent.

I can identify with that and I have been successful in learning to enjoy who and what I am. And laughing at myself and my foibles is also a great way to deal with some idiosyncrasies I own. After all, who does not have faults, and don’t faults give us unique character?

While being compassionate to the rest of the world, the poor, the environment, the senior citizens of your life, I’d highly recommend being compassionate towards yourself. You’ll see that you become less of a worrywart weighed down with insecurities of your life, future and family, and a more inspiring person to be around. Apart from the fact that you’ll attract success and successful people too.