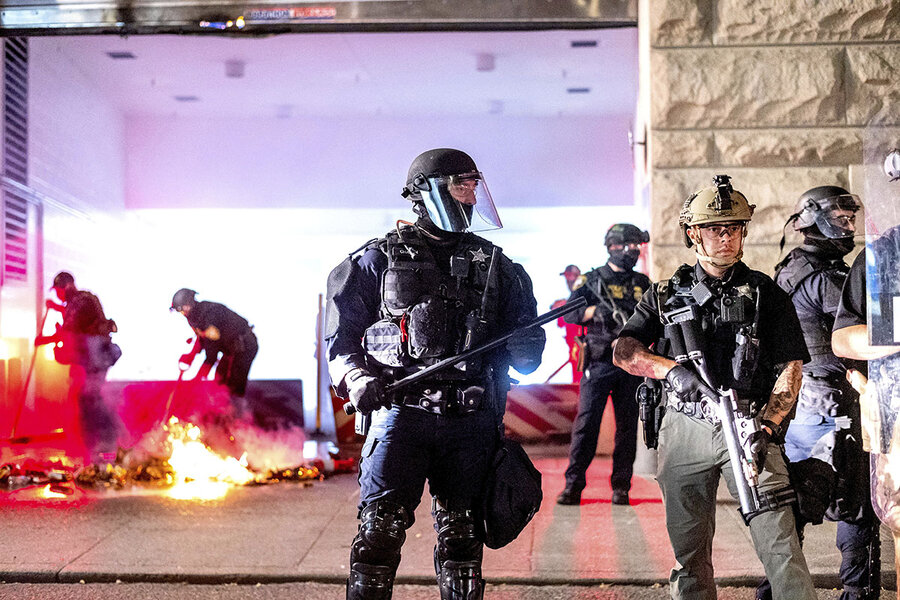 But 2020 isn’t 1972. An approach that has paid off for generations of primarily Republican politicians may resonate differently now. The protesters of today, so far, are viewed more favorably than the protesters of the 1960s and ’70s were in their time. And the tactic is so well-worn that many voters may view it as explicitly divisive and inflammatory.

“That it’s a pretty transparently racially-coded move, and a pretty obvious attempt to both heighten and tap into racial tensions, may make it less effective this time around,” says Katherine Beckett, a professor in the departments of sociology and law, society, and justice at the University of Washington. “But time will tell.”

An appeal to emotion

Throughout the Republican National Convention and in the days that followed, Mr. Trump and his campaign have talked a lot about how dangerous America would be under a President Joe Biden. They’ve largely elided the fact that it is Mr. Trump who is the nation’s chief executive at a time when the United States is being roiled by protests against police brutality – and the violence that has followed these protests after dark in some cities.

The point is to present Mr. Trump as a strong leader who can stop the unrest. The president’s repetition of “law and order” is meant to convey that, as is his insistence that Mr. Biden will “totally destroy the beautiful suburbs.”

All of this rhetoric about invasion, rioting, and crime is part of a broader appeal to fear, an emotion to which conservatives have historically responded, says Ted Johnson, a senior fellow at the Brennan Center for Justice.

“That is a scare tactic used to incite people’s fears and anxieties against others,” Dr. Johnson says.

In many ways, Mr. Trump employed a similar tactic in his 2016 campaign – it’s just that the “others” have changed. Four years ago, his harshest rhetoric was aimed at immigrants, and the alleged crime and economic damage they would cause. He revived the approach in 2018 with dire warnings about a migrant caravan from Central America. This time, the attacks are aimed at ‘radical socialists’ and Black Lives Matter protesters.

“The message has been consistent. It’s just the target of the messaging that is slightly different,” says Dr. Johnson.

For weeks, Trump campaign officials have believed the images of police grappling with angry protesters in Portland, Oregon, and elsewhere would play to their advantage. Some Democrats have begun worrying about the same thing, and implored Mr. Biden to take a stronger stance against the looting and burning of stores and other businesses.

Mr. Trump’s poll numbers have indeed improved somewhat. Since August 17, the first day of the Democratic National Convention, Mr. Biden’s lead over Mr. Trump in a head-to-head match-up has fallen from 8.4 percentage points to 7, according to the FiveThirtyEight average of major surveys.

Support for Black Lives Matter appears to have fallen as well. Favorable views of BLM have dropped by 9 points since June – and by 13 points among Republicans, according to a new POLITICO/Morning Consult poll.

But that POLITICO survey also showed voters preferred Mr. Biden over Mr. Trump to handle public safety by 47 to 39%. And a recent YouGov survey found that 56% of respondents felt violence at protests would get worse if Mr. Trump were reelected, while a plurality of 43% felt it would get better if Mr. Biden won.

Law and order as concepts are broadly popular, of course. They’re the opposite of anarchy. A government’s most basic role is to provide stability and safety for its citizens. Political appeals to “law and order” are meant to tap into that atavistic need.

As a phrase, it’s been used for centuries around the world. The 17th century political philosopher John Locke even spoke about it, says Malcolm Feeley, a professor of law emeritus at the University of California, Berkeley.

“‘Law and Order’ is a phrase that’s a bit like motherhood and apple pie. It’s been around forever,” he says.

In America, it’s been used by Southerners to oppose abolitionists prior to the Civil War, by the NAACP and its supporters to oppose racist violence in the early 20th century, by supporters of Prohibition, and by a number of small “Law and Order” political parties over time. The phrase itself has spin-offs, says Dr. Feeley – like “tough on crime.” But “law and order” has a certain connotation and flexibility that has made it durable.

In the U.S. in the 1960s, it found a resonance with conservatives that it has maintained ever since. The phrase is a political Rorschach test, appealing to whatever it is that voters are most anxious about at the time. It conjures up the kind of society most people would like to live in, one of stability, decency, and security.

It is also an implicit defense of the status quo against change – whether that change takes the form of hippies, feminists, racial equality, gay rights, or the general counterculture, says Michael Flamm, a professor of history at Ohio Wesleyan University and author of “Law and Order: Street Crime, Civil Unrest, and the Crisis of Liberalism in the 1960s.”

“It’s very much an emotional appeal and a way of rallying supporters against an assortment of causes or concerns,” says Dr. Flamm.

That was the case in Barry Goldwater’s 1964 campaign for president, says Keith Gaddie, chair of the political science department at the University of Oklahoma. Senator Goldwater’s law and order rhetoric sounded familiar to Southerners used to repressive “Black codes” and Jim Crow laws.

“A lot of the rhetoric Goldwater would use wasn’t invested in racism, but it resonated with a conservative, Southern, white ear,” says Dr. Gaddie. “When he would say ‘law and order,’ that was interpreted in some Southern precincts as meaning, ‘I’ll keep Black people in line.’”

He won the peripheral Southern states and the overall election by targeting “polite racist” voters – the sort of people who abhor lynching and overt prejudice but also don’t want changes to the status quo, says Angie Maxwell, the director of the Diane Blair Center of Southern Politics and Society at the University of Arkansas. In the post-Civil Rights era, openly racist appeals such as those used by Governor Wallace were no longer defensible, so coded language became the norm.

Mr. Trump’s approach has in some ways been less subtle than even that used by such hard-nosed GOP strategists as Lee Atwater. The president has drawn sharp criticism for saying there were “very fine people on both sides” of the violent protests in Charlottesville, Virginia, where white supremacists had marched with flaming torches. He has defended Kyle Rittenhouse, the teenager charged with intentional homicide for shooting three aggressive protesters, two fatally, in Kenosha, Wisconsin.

It’s possible that the greater political polarization of 2020 America gives Mr. Trump more leeway to use blunter language, says Dr. Maxwell. In some ways the return of law-and-order politics is a reflection of where the Republican Party is, as much as the president.

Or it could simply be an instance of a party and a presidential candidate repeating strategies that have worked in the past.

“If Trump does this and he loses, it’s going to be a big ‘come to Jesus’ moment, with the Republicans wringing their hands and asking what happened,” says Dr. Maxwell.