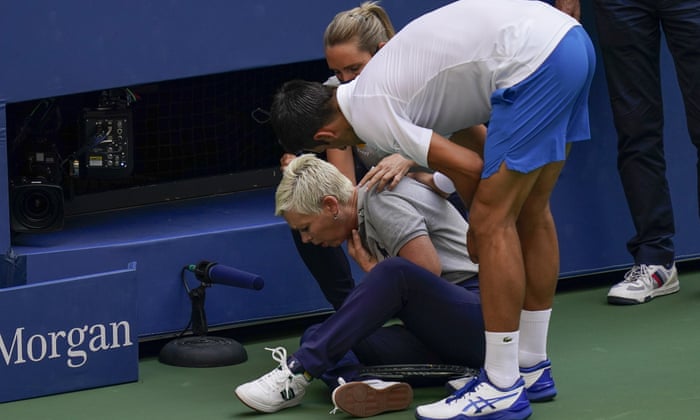 Novak Djokovic was thrown out of the US Open after accidentally hitting a woman line judge with a ball towards the end of the first set of his match against the Spaniard Pablo Carreño Busta, then was widely criticised for immediately leaving Flushing Meadows.

The world No 1 had to forfeit the $250,000 he was due for reaching the fourth round, “in addition to any or all fines levied,” according to the United Tennis Association, as well as losing all his ranking points.

The incident is a significant blow to Djokovic’s standing in tennis, especially as he was challenging the establishment by forming a rebel players’ association that has split the sport.

Djokovic walked from the court and shortly afterwards was seen leaving in his car and heading for his rented home. Word reached officials that he would not be returning to offer an explanation. It was not a good look.

Novak Djokovic has been defaulted from 2020 US Open.
Lesson:
-Staying calm is highly important even if you are already at the top

Tim Henman, who was disqualified for a similar incident at Wimbledon in 1995 when he accidentally struck a ballgirl, said Djokovic was wrong to leave. “He should have faced up to it and apologised and accept he made a mistake. But by in essence running away from it, it’s just going to go on even longer.

“We wouldn’t want to see the best player in the world go out of the tournament in these circumstances but you have to be responsible for your actions on the court.”

The former British No 1 Greg Rusedski agreed. “He would know the rules,” he said. “At 33 years of age you know what the situation is and what’s going to happen. I feel bad for him in one respect, because he’s lost his opportunity to win his 18th major. He’ll be absolutely devastated, one for the lines woman he accidentally injured, as well losing out trying to win another major.” The sequence of events blew the silence on Arthur Ashe Stadium apart. Djokovic, who had looked in control for the first 40 minutes, failed to convert three set points at 5-4, then lost six points in a row, fell while chasing down a wide forehand and jarred his shoulder at five-all, 0-15. 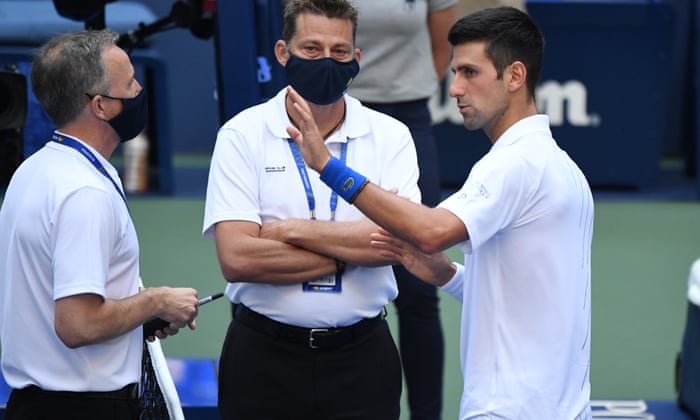 The match resumed after he received on-court medical treatment but Djokovic still looked out of sorts and Busta broke him to 15. Frustration seemed to well up in the Serb, down 5-6, and, swivelling slowly, he took a spare ball from his pocket, hitting it with no great force, it seemed, but it struck the official in the throat.

She fell to the ground, choking and in obvious distress. Djokovic rushed to her side and apologised as court officials, including the chair umpire, Aurélie Tourte, came to her aid.

As Carreño Busta sat on his chair, bemused, Djokovic and Soeren Friemel, the tournament referee, chatted amiably at first before the player became more agitated as he realised he was about to be thrown out.

One unconfirmed report said Djokovic pleaded with the official: “She doesn’t have to go to hospital for this,” adding, “You’re going to choose a default in this situation? My career, grand slam, centre stage.” Djokovic was not available to confirm or deny this account of their exchange.

Carreño Busta said he felt some sympathy for Djokovic, although he did not see the incident, as he was celebrating the break. “I was a little bit in shock,” he said. “I never expected this moment playing against Novak. Of course I think it was not intentional. It was just a moment. I broke his serve and he throws the ball. I think it was bad luck. He never wanted to hit the line umpire. The rules are the rules. The referee and the supervisor did the right thing but it is not easy.”

Alexander Zverev, who won through to the quarter-finals by beating Alejandro Davidovich Fokina 6-2, 6-2, 6-1, looked at it very much from the point of view of a title contender when he said: “If it had landed anywhere else – we’re talking about a few inches – he would have been fin e. Very unlucky. There’s no grand slam champions left in the draw. It’s going to be one of the young guys, I think. Now is the time when I think it gets really interesting. I know who’s where in the draw. We’ll see where we go from here.”

Djokovic has been involved in similar incidents at least twice, at Roland Garros in 2016 and later that year at the ATP World Tour Finals, when he hit balls into the crowd.

“You guys are unbelievable,” he told the British media then when questioned in London. “You’re always picking these kind of things. I’m still not suspended, so I’m not close [to hitting a spectator]. It could have been [serious], yes. It could have snowed but it didn’t.”

A bigger storm is gathering around Djokovic now, however. Criticism came from all quarters. Martina Navratilova, who won four of her 18 grand slam titles in New York, said: “Unbelievable what just happened. Novak Djokovic defaulted for inadvertently but stupidly hitting a linseswoman in the throat with a ball and the officials had no choice but to default.”

Billie Jean King, after whom the site is named, said on Twitter: “First, I hope the line judge is OK. The rule is the rule. It is unfortunate for everyone involved but in this specific situation the default was the right call.”

The fine, disqualification and opprobrium were inevitable. The grand slam rules of conduct state: “Players shall not at any time physically abuse any official, opponent, spectator or other person within the precincts of the tournament site. Violation of this section shall subject a player to a fine up to $20,000 for each violation.

“In addition, if such violation occurs during a match (including the warmup), the player shall be penalised in accordance with the point penalty schedule. In circumstances that are flagrant and particularly injurious to the success of a tournament, or are singularly egregious, a single violation of this section shall also constitute the major offence of ‘aggravated behaviour’ and shall be subject to the additional penalties hereinafter set forth.

“For the purposes of this rule, physical abuse is the unauthorised touching of an official, opponent, spectator or other person.”

That was a legal hole out of which Djokovic, a master escape artist on court, could not extract himself.