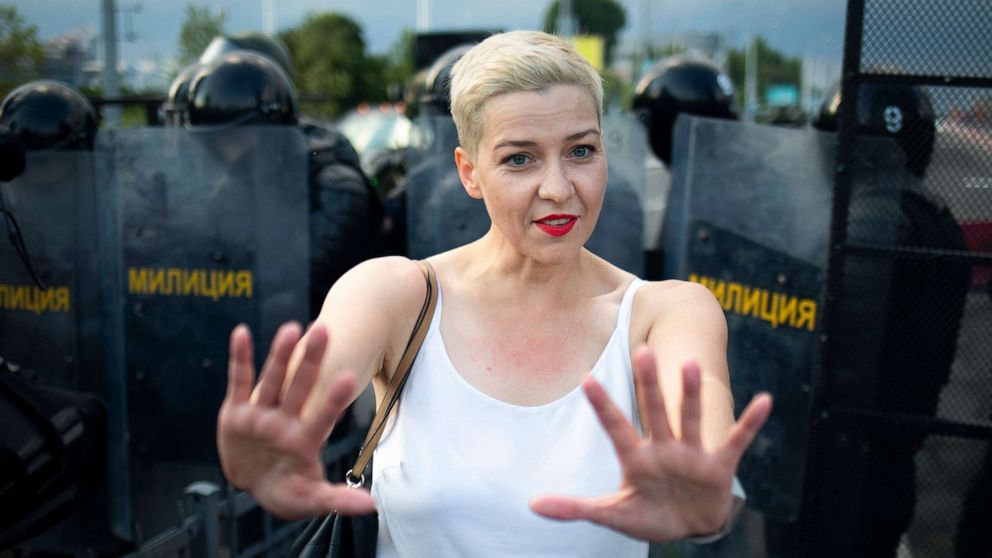 LONDON — A key opposition leader in Belarus has disappeared in the country’s capital, Minsk, after another weekend of mass protests against the rule of embattled President Alexander Lukashenko.

Maria Kolesnikova, the central opposition figure inside the Eastern European nation, was seen being bundled into a vehicle by men in plainclothes, according to independent Belarusian news outlet Tut.By. Kolesnikova’s press representative, Gleb German, confirmed to ABC News that their team had had “no contact” with her Monday. Her whereabouts, along with that of two other leaders involved in the opposition’s Coordination Council, Anton Ronenkov and Ivan Kravtsov, are unknown and their lawyers are looking for them, according to German.

The Ministry of Internal Affairs of Belarus said they had no information on the alleged disappearances, according to Russian news agency Interfax.

With Belarus’ main opposition leader, Svetlana Tikhanovskay, sheltering in neighboring Lithuania, Kolesnikova has become a highly visible figure in the ongoing protests against Lukashenko, known as “Europe’s last dictator,” who has served as president for 26 years. The protests erupted in the wake of the country’s contested election last month, in which Tikhanovskay ran against Lukashenko and the autocratic president claimed 80% of the vote.

For several weekends in a row, hundreds of thousands of Belarusians have taken to the streets demanding Lukashenko step down. Kolesnikova has regularly been seen out in the open during those demonstrations, talking to several media outlets in the process, including ABC News.

“Till victory, we will not stop down,” Kolesnikova told ABC News at a recent protest. “We are ready to go to the victory and it takes a lot of time and energy, but we are ready.”

Kolesnikova’s disappearance raises serious concerns about the safety of opposition activists inside Belarus. Hundreds more arrests were made by Belarusian security forces over the weekend, and foreign media outlets have been banned from working in the country.

Russian President Vladimir Putin, an ally of Belarus’ beleaguered president, has created a “reserve” force to use in the neighboring country, but for the time being has said there is no cause to intervene on behalf of Lukashenko. Russian state media journalists have already been sent to replace Belarusian workers on strike at Belarus’ state television service, and many of Russia’s top ministers met with their Belarusian counterparts this week.

The disappearance of Kolesnikova comes less than a week after German doctors discovered that Russian opposition leader Alexey Navalny was poisoned with a Novichok nerve agent, developed as part of a secret Soviet chemical weapons program. Navalny, one of Putin’s fiercest critics, was recently removed from a medically-induced coma at a Berlin hospital, after falling ill on a plane in Siberia just over two weeks ago.

Belarus’ security force, still known as the KGB, has stepped up its clampdown on key figures of the protest movement in recent days.