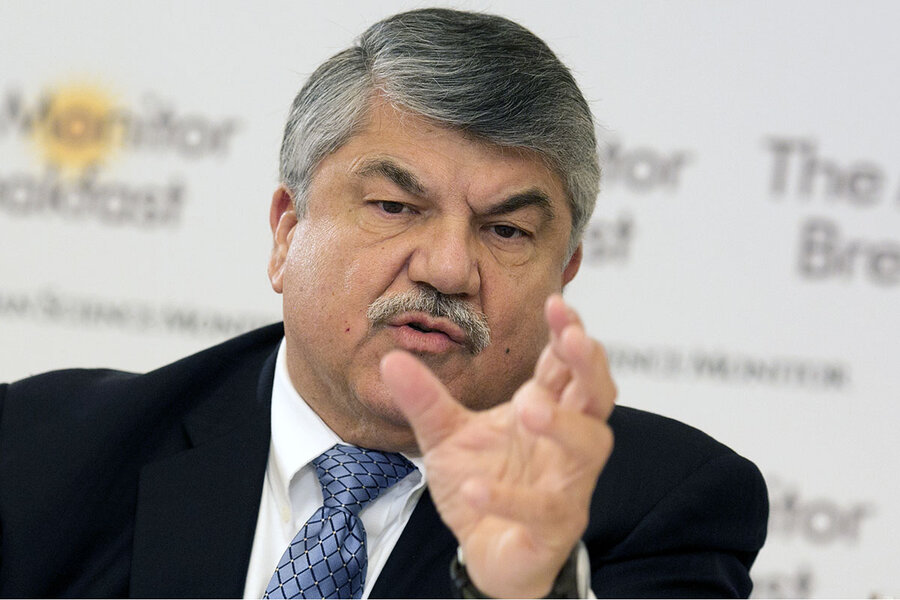 In the year since the Monitor’s last breakfast with Richard Trumka, president of the AFL-CIO, the world has changed dramatically. Unemployment a year ago was 3.7%; in July, the latest figure available, it was 10.2%.

A year ago, few Americans had heard the word “coronavirus.” Today, it remains the nation’s abiding challenge – keeping many children out of classrooms and adults away from workplaces, or risking their health to do work that must be done in person, or out of work altogether.

And the presidential election is two months away.

Mr. Trumka, questioned by reporters via Zoom at our annual pre-Labor Day get-together, spoke about the 2020 presidential race, the teachers’ and police unions, and his own future at the nation’s largest trade union federation. Here are excerpts, lightly edited for clarity:

Can Democratic nominee Joe Biden win back enough of the traditionally Democratic blue-collar workers who handed President Donald Trump the election four years ago in Wisconsin, Michigan, and Pennsylvania?

“Workers back in 2016 didn’t think that either the economy or the political system was working for them. They were looking for someone who was going to change the rules to make the system work for them.

What can teachers’ unions do to help schools reopen and get kids back in classrooms so the parents can really go back to work?

Look, every teacher out there wants to get back in the classroom. That’s what they do and that’s what they love. Teachers are fiercely protective of their students and the community where they do business. Right now, most school districts, many school districts don’t have the resources necessary to be able to put kids back in the classroom safely so that they protect the students and protect the professional staff.

“The HEROES Act, by the way, if it were passed, would provide that aid to those schools and it would have helped us get kids back to school more quickly.”

What about the International Union of Police Associations, which endorsed President Trump? Should the AFL-CIO discontinue its affiliation with IUPA?

“People have told me that you ought to disaffiliate the police union…. Let’s assume I did that. They’re gone. Now what?

“Nothing changes. The harder thing, quite frankly, is for us to engage them and get them to change their culture. And that’s what we’ve started doing.

“I set up a task force to deal with systemic racism. And one of the subcommittees on that task force is dealing with the police officers and corrections officers. Because remember this: Many, many, many – most – officers are good, good citizens and are trying to do what’s right.

“There are bad cops, and those bad cops need to be weeded out. And we need to help our members get the tools to weed those bad cops out and have police forces providing the type of safety that every community wants. So we’ve started that process.”

Your third four-year term as AFL-CIO president ends in about a year. Will you run for reelection?

If you decide not to, is the next AFL-CIO president a woman?

“Well, regardless of what I do the next time, I hope that the next president of the AFL-CIO is a woman.”