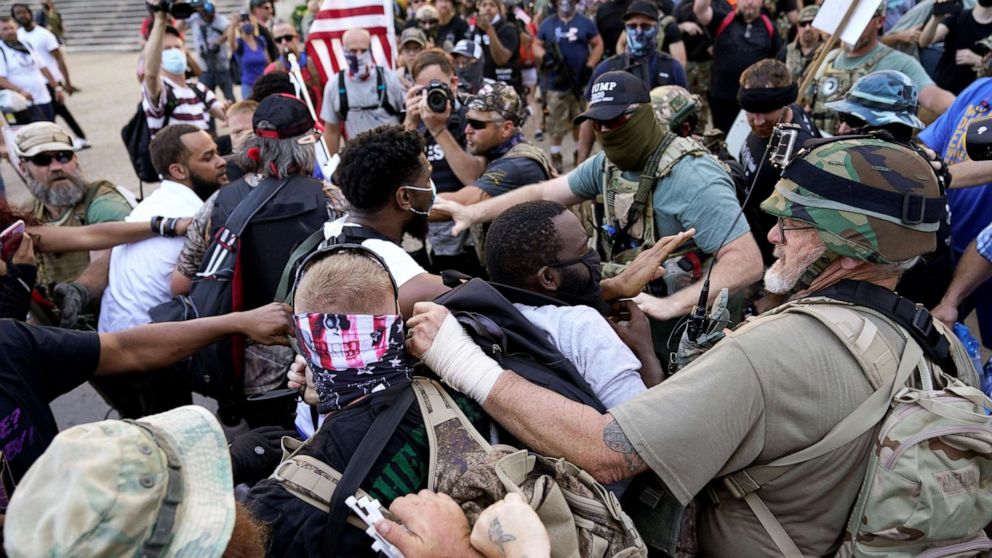 As the Kentucky Derby got underway Saturday, the city of Louisville saw protests from far-right activists and those calling for justice in the aftermath of Breonna Taylor’s fatal shooting by Louisville, Kentucky, police.

As the Derby horses were leaving to get into the starting gates for the 7:02 p.m. post time, a small plane with a banner reading ”Arrest the cops who killed Breonna Taylor” was circling Churchill Downs.

Protesters calling for justice for Taylor had gathered at a park less than 1 mile away from Churchill Downs, late Saturday afternoon. Some protesters chanted, “No justice, no Derby.” Members of the self-described NFAC militia had also arrived at the park.

Earlier in the afternoon, a small scuffle ensued between groups of protesters. Tensions reportedly calmed down after an armed group of self-described “patriots” left downtown Louisville and police arrived in riot gear at a park near the downtown courthouse, according to an ABC News producer at the site.

Authentic, trained by Bob Baffert, won the race, leading almost the entire way and knocking off the favorite, Tiz the Law. The Derby was postponed from its usual May running, and spectators were banned from the stands.

Louisville Metro Police were also on the scene of an apparent domestic incident near Churchill Downs. According to a statement from LMP, a subject was wanted on an active emergency protective order, and had barricaded himself inside a residence with a juvenile. The subject surrendered peacefully before 2:30 p.m., police said, and the incident was not related to the protests.

Several Louisville officials have weighed in on the city’s plans for protests throughout the day.

The city of Louisville posted its plans for dealing with protests on Derby Day on its official website. In the statement, the city said it “fully supports First Amendment rights,” but “If activities become unlawful, LMPD has plans in place and is prepared to handle the situation.”

“If people are blocking traffic, creating dangerous conditions on our roadways or trespassing on private property against the wishes of the property owner, the police will cite and/or arrest them. Anyone committing violence or vandalism will be arrested,” the statement reads.

Kentucky Gov. Andy Beshear also acknowledged that this Derby Day “is very different for many reasons.”

“Kentuckians are battling inequities, injustice and a global health pandemic brought on by COVID-19,” he said in a statement. “For those who make your voice heard today, we are continuing to listen. For Kentuckians gathering today or over the holiday weekend, I ask you to please do so safely.”

Since Taylor’s death on March 13, when she was shot after three undercover Louisville officers, Myles Cosgrove, Brett Hankison and Sgt. Jonathan Mattingly, executed a no-knock warrant at the apartment she shared with her boyfriend, Kenneth Walker, Louisville and other cities across the nation have become hotbeds of protests and counter-protests.

In July, three members of an armed militia were shot in an apparent accident at a protest calling for justice for Taylor in Louisville.

In June, Steven Nelson Lopez who was reported as having a history of mental illness and homelessness, allegedly opened fire into a crowd of protesters in Louisville, Kentucky’s, Jefferson Square Park. 27-year-old Tyler Gerth was killed.