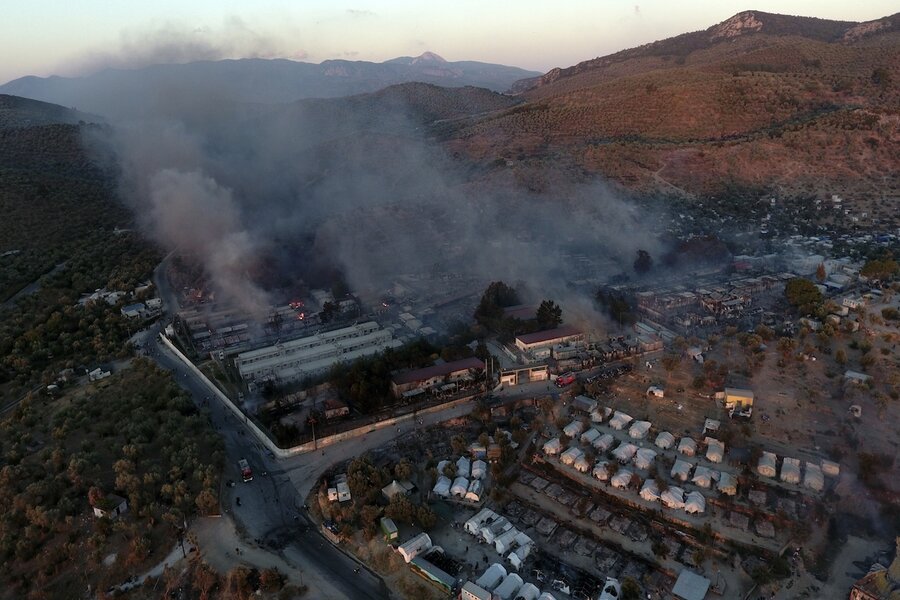 Thousands of migrants were left without shelter on Wednesday after overnight fires gutted their overcrowded camp on the Greek island of Lesbos, and authorities warned that some asylum seekers who tested positive for COVID-19 could spread the virus.

Athens declared a state of emergency on Lesbos and sent police reinforcements to the island to help keep order.

As migrants camped out in fields nearby or sifted through smoldering debris in search of possessions, Deputy Migration Minister George Koumoutsakos said about 3,000 people affected by the fires would be temporarily housed in tents.

“The situation in Moria cannot go on [as it is] because it is simultaneously a public health and national security issue,” Prime Minister Kyriakos Mitsotakis said in a televised address, adding that managing migrant flows was a “European problem.”

“We have been in intensive talks with the Greek government since yesterday,” German Interior Ministry spokesman Steve Alter wrote on Twitter.

“We have helped Greece in the past and we will of course also help now,” he added.

Some of Germany’s federal states have already offered to take in migrants, including Berlin, but the spokesman would not be drawn on whether Interior Minister Horst Seehofer would clear the way for this to happen.

“The current situation presents us with challenges but that is no reason to question our existing legal framework,” Mr. Alter said.

The cause of the fires, which broke out soon after midnight, remained unclear but authorities were investigating whether they were started deliberately after COVID-19 tests led to the isolation of a number of refugees.

“There was not just one but many fires in the camp. Migrants threw stones at firefighters trying to put out the fires,” Constantine Theophilopoulos, fire brigade chief for the northern Aegean, told ERT TV.

The camp had been placed under quarantine last week after an asylum-seeker tested positive for COVID-19. As of late Monday, 35 migrants had been confirmed as having the virus.

Greek government spokesman Stelios Petsas said camp residents would not be allowed to leave Lesbos due to the pandemic, though EU Home Affairs Commissioner Ylva Johansson said the European Union had agreed to fund the immediate transfer of 400 unaccompanied children and teenagers to the Greek mainland.

Some migrants tried to head towards the town of Mytilini early on Wednesday but police stopped them, eyewitnesses said.

Aid groups have long criticized conditions at the camp, which hosts more than four times its stated capacity, saying it is impossible to implement social distancing and basic hygiene measures there.

The UN Refugee Agency (UNHCR) said it had received reports of tensions between people in neighboring villages and asylum seekers who were trying to reach Mytilini town.

“Events in Moria last night are unthinkable but tragically predictable as the dire situation on the islands has gone on for far too long,” said Dimitra Kalogeropoulou, International Rescue Committee (IRC) Greece Director.

The UNHCR has previously said nearly half of migrants now detained on the Greek islands are from Afghanistan and a further 19% are from Syria. Lesbos, which is just off the Turkish coast, was on the front line of Europe’s migrant crisis in 2015-16.

Greek authorities put Lesbos under a state of emergency for four months for public health reasons, allowing them to mobilize all forces to support the asylum seekers and island residents.

Mytilini mayor Stratis Kytelis said migrants would have to be moved or housed on ships to prevent the spread of COVID-19.

German Foreign Minister Heiko Maas described the fires as “a humanitarian disaster,” and said EU member states should be ready to take in some of the refugees from the camp.

Boris Pistorius, interior minister of the north German state of Lower Saxony and an influential figure in Germany’s Social Democratic Party (SPD), said it was time to shut the Moria camp.

“This overcrowded camp is the symbol of the failure of Europe’s asylum policy,” he said.

Slovenia woman jailed for cutting off hand for insurance fraud