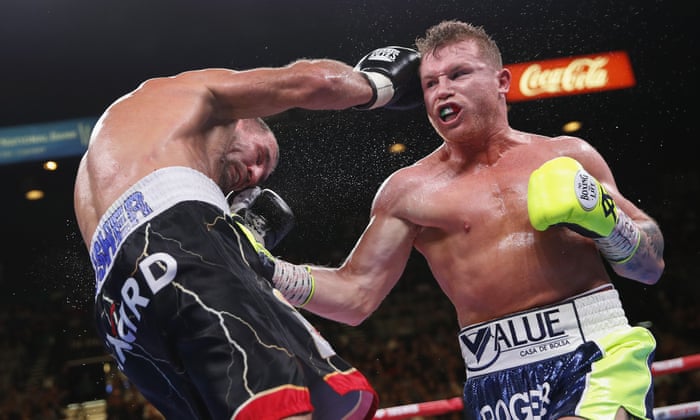 Mexican boxing superstar Saul ‘Canelo’ Álvarez is suing longtime promoter Oscar De La Hoya and upstart streaming service Dazn over their alleged failure to deliver as promised on a $365m contract that was touted as the richest in the history of sport when he signed it less than two years ago.

The civil suit filed on Tuesday in US district court for the central district of California, a copy of which has been obtained by the Guardian, alleges both Dazn and De La Hoya’s Golden Boy Promotions have breached their respective contracts with the four-weight world champion, causing damages of at least $280m.

The lawsuit states Álvarez was guaranteed payments totaling $365m for his next 11 matches under the terms of a record contract signed in October 2018: a $15m purse for a December 2018 fight with fringe contender Rocky Fielding and $35m for each of his 10 following bouts, expected to be on or around the sport’s customary tentpole dates of 5 May and 15 September from 2019 through 2023. The $35m guarantees for each fight were due to come out of the $40m license fee paid by Dazn to Golden Boy for each event.

Álvarez, who turned 30 in July, claims he was paid the promised amounts for the Fielding bout and a pair of 2019 victories over Danny Jacobs and Sergey Kovalev, but accuses Dazn and Golden Boy of failing to propose adequate plans for his 2020 fights, despite the boxer’s willingness to consider “offers in good faith” for payments below the guaranteed amount in light of the financial squeeze wrought by the coronavirus pandemic.

The impasse will almost certainly result in Álvarez, the lineal middleweight champion who has captured world titles in every division from 154lbs to 175lbs, going more than a year without a fight at the peak of his career.

According to the suit: “Despite repeated promises that an alternative offer was imminent, Dazn failed to make a proposal to either Golden Boy Promotions or Álvarez for several months. When Golden Boy Promotions and Álvarez proposed opponents, Dazn refused to confirm that it was prepared to broadcast Álvarez’ September 2020 bout or that it would pay the contracted $40 million license fee.”

The complaint alleges Dazn offered to pay Álvarez and Golden Boy a fraction of the contracted fee in cash and an unspecified amount of stock in the UK-based company in advance of a potential IPO, but the value of the offer was “substantially less than Álvarez’s guarantee”.

“Given that Dazn had made it clear that it would not honor its contract, throughout the spring and summer of 2020, Álvarez repeatedly asked Golden Boy Promotions to explore alternative broadcast options for a fall 2020 bout,” the complaint stated. “Although Golden Boy Promotions reported that it was talking to various broadcasters, it failed to put forth a single alternative plan by which it would pay Álvarez the $35 million it had promised him for each of his fights.

“Álvarez has fought the first three of his eleven fights under the Álvarez and Dazn Contracts. He is owed remaining guaranteed payments of $280 million.”

Dazn had made no secret of its preference that Álvarez opt for a third fight with middleweight nemesis Gennady Golovkin instead of lower-profile bouts with Jacobs and Kovalev he wound up taking. But the fighter’s contract stipulated his opponents were to be “mutually selected by [Álvarez] and [Golden Boy Promotions], subject to [Álvarez’s] final approval, not to be unreasonably withheld”, with Dazn retaining no right to accept or reject any selected opponent, according to the suit.

Still, Álvarez claims he “came to understand that Dazn believed that De La Hoya and/or other representatives of Golden Boy Promotions had promised – either contractually or otherwise – that Álvarez would select Gennady Golovkin as one of his 2019 opponents.”

This, according to the complaint, amounts to fraud on the part of Golden Boy, which has promoted Álvarez’s fights since 2010. The Guadalajara native also claims De La Hoya’s company “failed to consistently act in good faith in the best interests of Alvarez and failed to act as a reasonably careful promotor [sic] would have acted”, exposing it to breach of fiduciary duty.

The lawsuit claims Álvarez, who is demanding a trial by jury, has “suffered harm and damages, including, but not limited to, the denied guaranteed payments, lost gate revenue, and opportunities for ancillary revenue associated with bouts, such as sponsorships and apparel revenue” as a result of the wrongdoing.

“I’m the pound-for-pound No 1 in the world. I’m not scared of any opponent in the ring, and I’m not going to let failures of my broadcaster or promoters keep me out of the ring,” Álvarez said in a statement. “I filed the lawsuit so I can get back to boxing and give my fans the show they deserve.”

Golden Boy released a statement through a spokesperson on Tuesday night that said: “Canelo’s beef is with Dazn.”

“They’re the ones refusing to honor the contract by not approving the outstanding opponents we have presented to them and by refusing to pay the contractually required amount,” it continued. “Even though our contract specifically gives Golden Boy the right to wait until the pandemic is over and fans can return; in the best interest of boxing, Golden Boy is doing everything it can to make great fights happen. We remain ready, willing and able to make a fight for Canelo as soon as possible.”

In addition to compensatory damages of no less than $280m, Álvarez is also seeking punitive damages, attorneys’ fees, the costs of the suit and “a judicial determination that he is eligible to participate in bouts arranged and promoted by entities other than Golden Boy Promotions and broadcast by entities other than Dazn”.