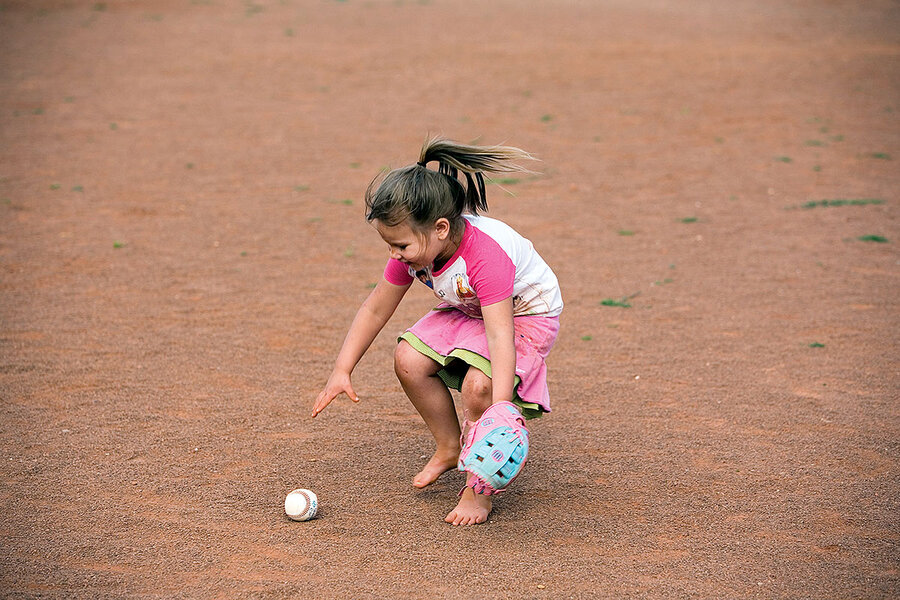 One of my proudest moments as a child came after a sandlot baseball game, when my mom told me that one of my playmates had arrived home with the back of his pants ripped waist to knee, and been asked, “Who saw you this way?”

This was verbal nirvana to a tomboy, and though I know the term can raise hackles today, back in the 1950s there was no other way to describe a girl who coveted all things outdoors, and sports in particular. I received the football I’d asked for one Christmas and slept with it that night, the leathery scent intoxicating. Another Christmas, an aunt who didn’t know me very well sent me and my sister authentic Shirley Temple dolls. I don’t recall ever playing with mine, but I wish I had it today. Think what it would fetch for reinvestment in sports!

I didn’t think of that as a kid. And so I spent two months’ allowance on a big black baseball mitt and grieved for longer than that when I lost it at a local park. I tried to join the Little League, which was boys-only in those days, and when refused, simply accepted my lot – to my discredit. Instead of becoming a women’s rights pioneer, I stuck to the sandlots with my male buddies, ripped pants and all.

I did not so much want to be a boy, just do everything they did. In jeans, too. School mandated dresses for girls, but again, I failed to protest. I just changed as soon as I got home.

One or two of my childhood girlfriends were like-minded, but none lived in my neighborhood, and so I spent 90% of my free time being, as Tom put it, one of the guys.

After my marriage, I attended a geology department picnic with my husband, where professors and graduate students competed at some hardball pitch and catch. I just happened to have my mitt (I have never been without one for long), so I squatted down like a catcher and invited pitches. Wary, slow, underhand lobs came my way from the guys, until I began getting bored and drilled a few back with a solid windup.

Then, the game was on, and I wonder if I perhaps helped Rob win his tenure that day. He didn’t have a clue how to catch or pitch, but the assembled scholars knew I’d be an asset to any intramural game.

I’ve since raised a son and helped raise a grandson with mitt, bat, and all kinds of sports paraphernalia. I’ve never hesitated to invest in such things. I happily agreed to soccer and basketball camps, and financed tennis lessons. OK, I forced tennis lessons, but my grandson developed a mean side-spin before he bowed out. I never could return one of those.

Gender divides in sports have faded, but haven’t disappeared – yet. There are still battles to be fought. The term “tomboy” seems to have disappeared, though. It’s a throwback, and probably rightly so. It connotes an aberration and (to me, as a girl) a feeling of superiority wholly undeserved. I was no better than my “girlie girl” sister (just kidding, Barb). Except at sports.

I felt privileged to be labeled a tomboy. I was enormously proud of my skills on the field – and that my pal Tom considered me enough like him to play on with ripped pants until we were all called home to our dinners.

I can still catch a fastball. There should be a term for someone like me who still pulls on a baseball mitt.

Even without Mushu, Disney ups remake game with ‘Mulan’

Who is Jehoshaphat and why is he jumping?

A first: Women show up in force on Venice Film Festival roster