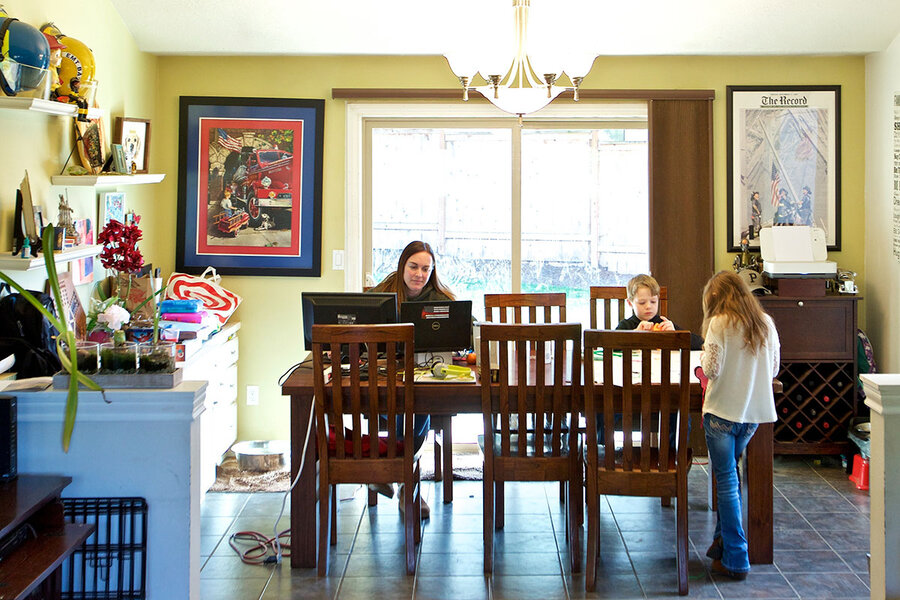 “It’s too early to tell how that will evolve,” says Jeff Greenhaus, professor emeritus of management at Drexel University in Philadelphia. But “people are going to look back in history at 2020 and it is going to be a watershed moment of how work and family are structured.”

The stress on family life has flared into public discussion everywhere from parent groups to labor unions. In response to a question at a Monitor-hosted breakfast with reporters this week, AFL-CIO President Richard Trumka called for “better child care options for people that work … and a different flexibility in the workplace.”

Of course, the work-from-home phenomenon is hardly new, stretching back to pre-civilization humans who planted crops outside their dwellings. In its latest incarnation, as a backlash to the modern office, it’s been on the rise since at least the 1970s, when a NASA engineer coined the term “telecommuting” to describe his remote work. Before the pandemic, an estimated 15% of employees were working from home part of or all the time. By April, according to one study, just under half of U.S. employees were working exclusively from home.

Less stress in the car … more at home

It is that sudden jump that makes 2020 potentially pivotal. Evidence is piling up that employees and companies are not going back, because the new normal has attractions for both.

Many workers like not having to drive to an office every day, saving them, on average, just under an hour each day in commuting time, according to the U.S. Census Bureau. Two-thirds of U.S. workers surveyed in July told tax-and-audit firm KPMG that they wanted to work from home at least some of the time and reported higher satisfaction and engagement with their employer. Some managers, meanwhile, see a bump in productivity or the opportunity to cut costs by reducing office space.

As early as April, a survey by research and advisory firm Gartner found that three-fourths of chief financial officers expected to make at least some of their employees full-time remote. In July, the Partnership for New York City found that some 1 in 4 financial and professional services companies planned to reduce their office space by at least 20%.

But remote workers also report they’re working longer hours and have more stress. The same KPMG survey that found workers want to work from home also found that three-quarters of them said the demands of work had gone up. Just under half said their mental health had declined.

“You feel like you’re digging a hole that you will never be able to get out of,” says Heather Williams, a senior policy researcher at RAND Corp. and mother to a 3-year-old daughter who didn’t attend preschool this summer. “What people didn’t understand is that I have few uninterrupted blocks of time in my day – the blocks of time that I might need to be able to think.” So when a manager scheduled an online meeting just to check in with everyone, that represented a major commitment of precious time, she adds.

Women bear the biggest burden of the new work-at-home paradigm. For all the talk about gender equality in housework and child care, the research still shows women responsible for the bulk of it, says Bobbi Thomason, assistant professor of applied behavioral science at Pepperdine University’s business school in Malibu, California. A study published in March found that, prior to the pandemic, wives were spending nearly twice as many hours on child care as their husbands. With many school districts now going to hybrid or all-virtual classes this fall, the added chore of supervising children’s education at home is stretching many mothers to the limit.

Professor Thomason sees it in the decline of submissions to academic journals by female professors. Ms. Williams sees it in the shift to part-time status by many top-performing female colleagues. (The two co-wrote a Harvard Business Review article in April on what the work-life balance would look like after the pandemic.) Traditionally, the move to part-time work holds back careers.

The burden is especially difficult for minority women, Professor Thomason adds. “Black women are more likely to be the breadwinner in their homes and more likely than white women to be the head of households.”

The strains on families extend to the millions of workers who must be on-site to do their job – from firefighters to factory workers – and who are tapping grandparents or other helpers to monitor stuck-at-home children.

But experts say it’s the new horde of teleworkers who, in the coming months and beyond, could be crucial in setting the tone for the era and pushing it toward a more integrated and satisfying life rather than a 24/7 working dystopia.

“For managers who have been reared in an environment where they’ve been able to see people, to ensure that people are at their tasks, it’s a whole new world,” says Stew Friedman, author of the 2008 book “Total Leadership” and an organizational psychologist at the University of Pennsylvania’s Wharton School. It’s new for families, too. “The home is no longer just a place to do all those things with your family. It’s also a place where you work and supervise your children’s education. That requires that people who are living together develop new models about how to communicate with each other in terms of what they need to do.”

Workers on unequal footing with employers?

Will families figure it out? Will companies and managers address the new challenges for their homebound workers, allowing flextime during the day, offering resources for the home office, and perhaps most importantly, giving extra time off for their stressed employees? Or will they stick to traditional office norms while at the same time forcing workers to work from home full time?

“If it plays out the way most social developments play out, the best parts of working from home – those privileges – will be laid out for workers who are elite workers,” says Professor Snyder of Williams. “And less appealing types of remote work will be likely to land on those who are struggling economically.”

Organized labor can readjust power at the negotiating table, although it’s not clear how well unions, which typically represent on-site workers, can organize the work-at-home force, even if it does become disgruntled.

“Compassion is what seems to me is what’s needed more than anything,” says Professor Friedman of Wharton. “That’s what ‘Total Leadership’ is all about: how you can make change happen that’s good for you and the people around you. That requires that you see the world through their eyes.” [Editor’s note: The quote was changed to make direct reference to Mr. Friedman’s book.]

Editor’s note: As a public service, all our pandemic coverage is free. No paywall.

Indian people would be voting for me: Trump

Deaths at protests from Kenosha to Portland, but motive tells different story

In Kenosha, Biden tries to thread the needle on protests and violence