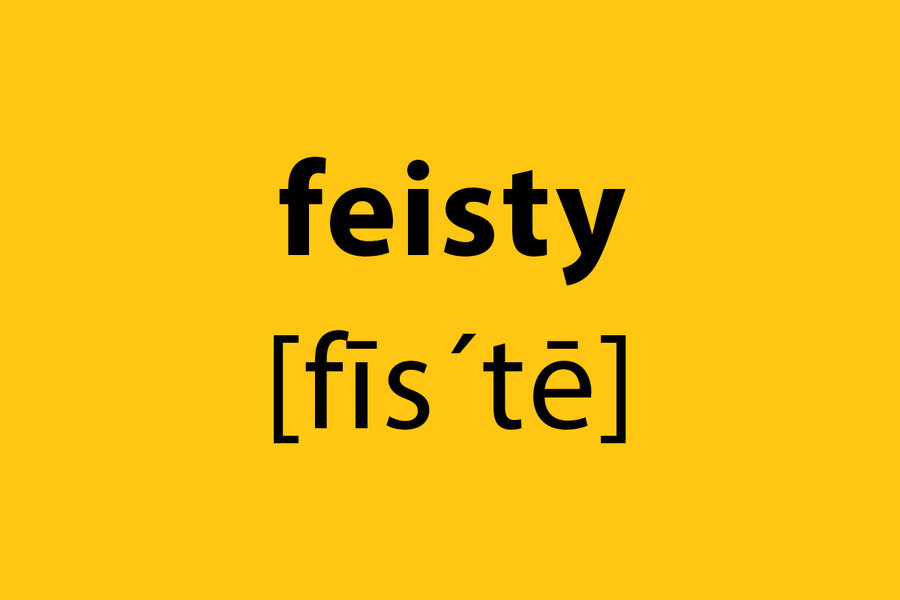 Sen. Elizabeth Warren is one feisty woman, according to the news media. Vox.com reported that she “looked feisty” in the 2020 Nevada Democratic debate, and The Washington Post in 2016 referred to her and Hillary Clinton, the Democratic nominee for president at the time, as “feisty grandmothers.”

At first glance, feisty seems like a compliment. Merriam-Webster defines it as “having or showing a lively aggressiveness: spunky,” while Oxford Dictionaries chooses “lively, determined, and courageous.”

Feisty, along with spunky and plucky, is an adjective that subtly undermines even while it ostensibly praises. As Oxford Dictionaries points out, feisty is typically used for people “who [are] relatively small or weak,” who might not be expected to display a lot of energy or courage. As activists and politicians from Elizabeth Cady Stanton to Senator Warren could attest, this is a label often pasted onto women.

Author Katha Pollitt argues that feisty is “the one-word version of ‘You’re so cute when you’re mad,’” and the word’s etymology suggests how this connotation arose. It comes from feist, a breed of small hunting dog popular in the Southern United States. These animals spend a lot of time barking, yapping, and wiggling – cute and funny, but not serious and impressive. Men are rarely considered feisty, unless they are older. Bernie Sanders often gets called feisty too, as if the media is surprised that he cares passionately and speaks forcefully in his late 70s.

The definition of spunky is “spirited,” or “courageous and determined,” from the Scottish spunk, “spark of fire.” But it too has been cutified. If grandmothers are the archetypal feisty people, then small young women, such as gymnast Simone Biles, are considered spunky.

Plucky is also reserved for “little” things that have courage beyond what might be expected of them. It’s often applied to women, as with the trope of the “plucky heroine” who solves a mystery, finds a treasure, or succeeds at a job, despite being out of her depth. Britain, though, prides itself on being “a plucky nation,” and in the 19th century, young lads were plucky too, so the term doesn’t have the same connotation as the others.

Some newspapers have acknowledged that these words can be subtly sexist, as well as ageist. The Guardian in Britain banned feisty when used to describe women, while the Women’s Media Center encourages journalists not to use “gendered terms such as ‘feisty,’ ‘spirited,’ ‘opinionated’ UNLESS your outlet would use them on a male candidate.” What to say instead? Jane Curtis, the centenarian activist recently profiled in The Christian Science Monitor, calls herself and other women in her life “tough.” That seems about right.