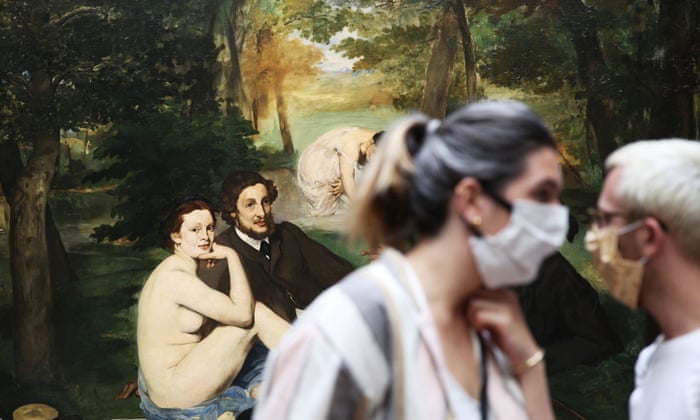 One of Paris’s biggest museums, whose galleries feature some of the world’s most famous nudes, has been accused of discrimination and sexism after refusing entry to a woman in a low-cut dress.

In a case of life not imitating art, a zealous official told a literature student whose name was given only as Jeanne that “rules are rules” and ordered her to cover her cleavage if she wanted to be allowed into the Musée d’Orsay, a popular tourist attraction and bastion of the beaux arts.

“Arriving at the museum entrance, I didn’t even have time to get out my ticket when the sight of my breasts and low-cut dress shocked the agent in charge of checking reservations,” Jeanne wrote in an open letter on Twitter, accompanied by a picture of her wearing the dress. “She left, chanting ‘ah, no, that won’t be possible, that isn’t possible, that won’t work that’.”

“At this point I had no idea that my décolleté had become the cause of all this drama,” she added.

Jeanne said she was told: “Calm down, Madam. Rules are rules,” but nobody explicitly said what rule she had broken.

“At no time did anyone say my breasts are a problem,” she added, writing that the friend she was with was wearing a crop top showing her abdomen, and other museum visitors appeared to be dressed for the hot weather.

Museum staff, however, would not be distracted from her cleavage, she said. Without explicitly telling what the problem was, they nodded to her cleavage and said “that”. Eventually, after first refusing to put on her jacket, she did so and was allowed in.

“I had the impression everyone was looking at my breasts, I was nothing more than breasts.”

She concluded her open letter: “I am not just a body. Your double standards should not be an obstacle to my access to culture and knowledge.”

As the post went viral, the museum tweeted that it had been made aware of the incident, which it “profoundly regretted”. A museum official called Jeanne to give what she called “a very sincere apology”.

Jeanne said she was satisfied with the phone call but the museum’s brief tweet failed to recognise the “sexist and discriminatory” nature of what happened.

It is not the first time the Musée d’Orsay – which contains numerous nudes, including Gustave Courbet’s The Origin of the World, Édouard Manet’s Olympia and August Renoir’s Grand Nu – has been accused of being prudish.

In 2016, Jonathan Jones wrote in the Guardian that although the museum was home to “some of the most outrageous nudes ever painted”, it was guilty of “prudery more worthy of Victorian England” after it called the police when a performance artist posed nude next to Manet’s work. Deborah de Robertis, from Luxembourg, spent almost two days in a police cell before a judge threw out a charge of public indecency.

The latest incident follows a nationwide backlash last month against what some decried as a wave of prudery after police patrolling a beach in the south of France ordered three topless women to cover up after a family complained. The outrage prompted the interior minister, Gérard Darmanin, to defend the “precious” right of women to sunbathe topless.

Goat clambers into patrol car and munches on police paperwork

Migrants stuck in limbo over a month aboard rescue ship