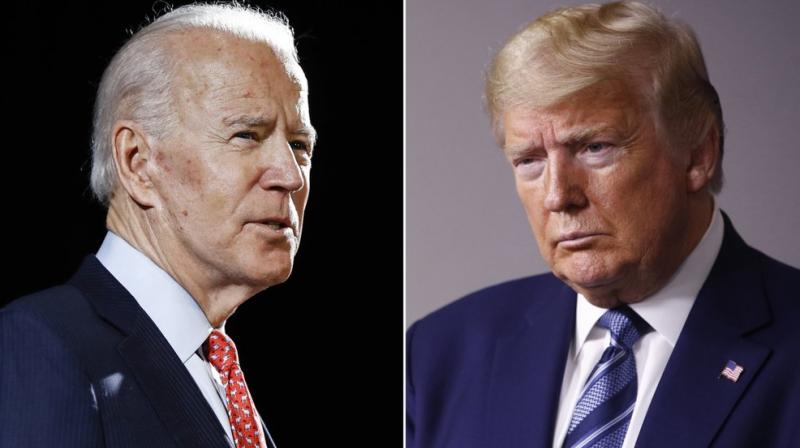 New York: For the time being, all the polls seem to be going Joe Biden's way ahead of the November 3 presidential election. But gamblers see a different reality and are putting their money on Donald Trump.

The Republican incumbent, who is seeking a second term, has slowly climbed back since late July to nearly even with the Democratic former vice president.

For some Australian and British bookmakers, Trump is the odds-on favourite.

Betting on national or local elections is illegal in the United States. All the action is happening on foreign gambling sites — which Americans can sometimes access.

A $100 wager on a Trump win today could bring the punter a return of $190 if he notches the victory.

"There is no doubt that the momentum appears to have swung back into President Trump's favour," said Rupert Adams, a spokesman for British bookmaker William Hill, which has already accepted more than $1.3 million in election bets.

Lee Price, a spokesman for Irish gambling brand Paddy Power, explains that after a slowdown in betting activity due to the coronavirus crisis, interest has "started to pick up again in recent weeks."

"We think the Trump factor is sure to keep punters interested," Price told AFP.

Many who have placed their bets on Trump now are hoping for a repeat of 2016, when the Manhattan real estate mogul staged a stunning comeback against Democratic challenger Hillary Clinton to win the White House.

British bookmaker Betfair has taken in 10 million pounds ($13.3 million) in bets on the White House race since August 23, on the eve of the Republican nominating convention.

That brings their total so far to 72 million pounds, as compared with 33 million pounds at the same point in the campaign in 2016.

Betfair is hoping to top the record of 199 million pounds wagered in 2016, half of which came after polling stations closed, explained spokesman Darren Hughes.

Beyond the main event, Paddy Power is taking bets on some quirky issues: will Trump paint the White House gold (500-1)? Will he have an airport in Mexico named after him (66-1)?

But Price says the interest in those types of bets has waned a bit.

Matthew Collins, a 29-year-old Australian sales consultant, placed 21 separate bets before the Republican convention — nearly all of them on Trump.

He picked the president to win again in November, but also as the winner of several specific states. In all, he put down about AUS$20,000 (US$14,570) — a sum he won on a bet that Biden would choose Kamala Harris as his running mate.

Collins, who describes himself as politically left-leaning, says he thinks Trump has gained momentum since his party's convention in late August, which came on the heels of the Democrats' event.

"The Republicans seem to like America. They don't hate their own country. I didn't get that from the DNC so I think that their message on its face isn't persuasive," Collins said.

'Watch where the money goes'

Nick Freiling, the CEO of a market research firm, who bet $300 on a Trump victory in traditionally Democratic Minnesota, says it's normal for the gap between the candidates to narrow as November approaches.

The coronavirus crisis is another major factor, he said — Trump faced sharp criticism for his handling of the pandemic, but the issue "is steadily falling out of our public consciousness, and people are less angry about things, generally."

Collins said he didn't believe the polls were "representative of reality" and said the margin of error "must be so high."

For Freiling, "the polls may be of 'likely voters' and show Biden winning. But what about voters' enthusiasm for their candidate (which correlates with turnout)? Trump is winning that battle by huge margins."

"Watch where the money goes," Collins said, predicting that Trump will dominate his three debates with Biden. "That's what people really care about."

He noted that voters can lie to pollsters about who they are supporting, which could skew results.

Those with skin in the betting game are also keeping an eye on the likely massive proportion of votes cast by mail this year, due to coronavirus concerns — a potential game changer.

"That feels like a situation that could get very messy," Collins said.

Are the troops turning on Trump?

How a pandemic exposed – and may help fix – inequalities in education