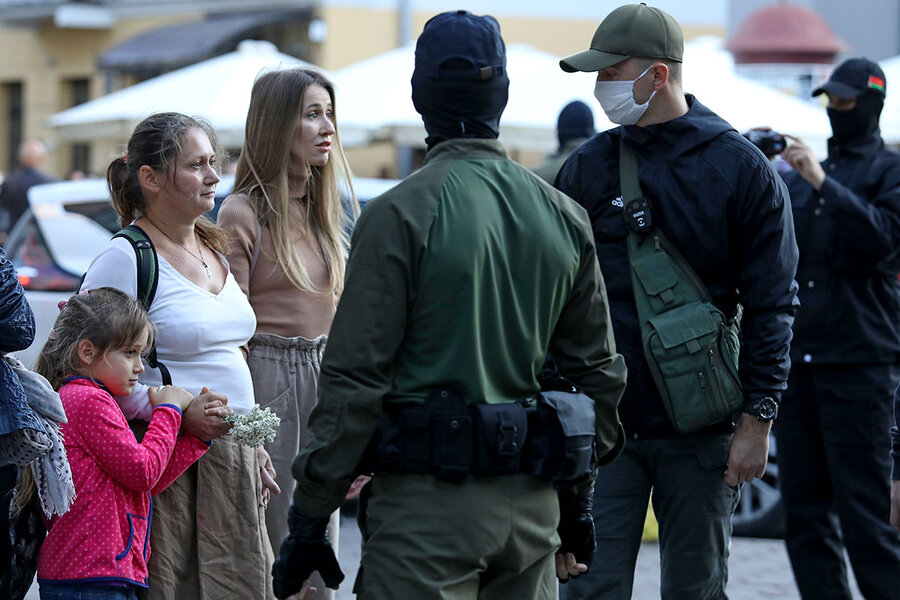 The impasse in Belarus has blown hot and cold over the past month, ever since people from all walks of life began pouring into the streets to protest an allegedly fraudulent election victory by their longtime leader, Alexander Lukashenko.

Security forces first tried to suppress protests with indiscriminate violence, then backed off and allowed people to rally peacefully. Most recently they have attempted a more targeted approach of rounding up opposition leaders and expelling them from the country. No police measures have worked, and Belarus awaits yet another weekend of massive street protests demanding Mr. Lukashenko’s departure and new, fair elections.

Much may hinge upon a summit between Mr. Lukashenko and Russian President Vladimir Putin, to be held in Moscow Monday. Russia, which backs Mr. Lukashenko’s reelection claim and upon which Belarus is economically dependent, holds the key to shoring up the country’s collapsing economy and faltering banking system with financial infusions and other aid.

But even without a resolution to the conflict, or even a clear way forward, many Belarusian protesters say that a month of struggle against Mr. Lukashenko’s regime has cleared their minds and changed their perceptions of what they will and won’t accept in future. Whatever happens next, they say, Belarusian society has crossed into new territory.

“During this month we have discovered that we can consolidate, we have grown up as a nation,” says Ksenia Turchina, a leader of the student strike committee at Belarusian State University in Minsk. “We’ve seen a real civil society starting to emerge, with people organizing in ways they never did, with initiatives of mutual assistance, holding creative evenings in the courtyards of residential buildings, many new things. People who never before declared a political position are now speaking out. …

“Belarus may change, for better or worse, but it will never be the same again.”

“Changes are in store for us”

Belarus, a nation of 10 million on the western fringe of the former Soviet Union, has been politically and economically frozen since Mr. Lukashenko came to power in a free election in 1994. Since then he has stacked the political deck, rigged elections, and tightly controlled the economic levers. Soviet Belarus had a highly developed industrial base, productive agriculture, and a well-educated population that was relatively homogeneous and almost entirely Russian-speaking. Mr. Lukashenko retained state control over the main industrial enterprises, and allowed only limited privatization in other sectors.

As a result many Belarusians remain dependent on the state for their economic security, a fact that has kept Mr. Lukashenko in power through five election cycles – but which may have failed for him this time around.

“Belarusians are not united in their attitude toward Lukashenko,” says Andrei Bastunets, head of the Belarusian Association of Journalists. “Part of the population, perhaps a considerable part – including those dependent on the state and security forces – are behind him. Nobody can say what was the true result of the election, or how many actually voted for him. Now there is a perception that the majority did not back him, and the mass demonstrations have made that clear.”

The protests in Minsk and other cities have been impressively huge and filled with enthusiasm, but they may not be an expression of universal will. In past election cycles it was mainly professionals, students, and intellectuals who took to the streets, and their protests petered out due to the failure of agricultural workers and the large working class to join them. This time considerable numbers of workers did join in, and independent union leaders promised a general strike that has yet to materialize.

“Representatives of the creative class, intelligentsia, and business are more inclined to focus on liberation, economic reform, and ensuring political and civic rights,” says Ms. Turchina, the student leader. “For those who are popular with the working class, social reforms and raising living standards are principal concerns. In this situation the opposition has only voiced one program: fair elections and a new president.”

That lack of political planning is related at least partially to the virtually leaderless nature of the protests. During his 26 years in power, Mr. Lukashenko has actively suffocated any sign of emerging civil society, independent political parties, or even public figures who might attract popular trust. Hence, outside of the official ruling circles, there is a distinct shortage of administrative expertise, managerial skill, and political savvy to draw upon. That’s been aggravated by the latest policy of scooping up opposition figures on the streets and deporting them to Poland or Ukraine.

As for those who are not protesting, it is hard to gauge their thinking, in part because many seem reluctant – or afraid – to talk about it.

Natalia Larionova, a medical worker and young mother in the provincial city of Vitebsk, says she is tired of quarreling with her family and friends about politics.

“I work a lot, and my principal concern is my family and my children,” she says. “I am not going to go out into the street and make myself a target, because I see no sense in it. We have good conditions here in Vitebsk for families, including things like subsidies for children under 3, flats provided for families with children, and other benefits. …

“I suppose changes are in store for us, and we shall have to accept them. But I am not sure about it. Look at the crises in Europe and the U.S., do we want that? I have relatives in Ukraine who say that after all those struggles, it seems like Europe doesn’t even want them. Actually, Russia looks better to me.”

A leery eye on Russia’s involvement

Mr. Lukashenko has courted Russia for financial aid and subsidized energy, and long ago signed on for a “union state” that would eventually lead to full economic integration between Russia and Belarus. He will almost certainly go to Moscow on Monday with his hand out. But in recent years his relationship with the Kremlin has soured because of Mr. Lukashenko’s regular flirtations with the West, his frequent ultimatums to Russia over energy subsidies, and his foot-dragging on Russian demands to open up for Russian investment in Belarus’ closed economy.

Mr. Putin has already pledged military assistance – Russia and Belarus belong to a common NATO-like security alliance – in the event that Belarus is threatened from outside and, more ominously, promised to create a reserve police unit to help restore order if Belarus should face civic breakdown. After a mass walkout of Belarusian television workers, technicians and experts from Russia’s giant state-run RT media conglomerate came in to take their places.

Russian experts say that Mr. Putin’s short-term objective will be to bolster Mr. Lukashenko and prevent any precipitous changes in what the Kremlin regards as a vital “buffer state” between Russia and NATO. That might include assistance to ward off an impending financial crisis in Belarus, which will likely be paid for by major economic concessions by Mr. Lukashenko. In the longer term, the Kremlin is likely to back a process that might rearrange the leadership in Belarus without threatening its pro-Russian geopolitical allegiance.

“Russia will probably push Lukashenko toward constitutional reforms that will make possible fresh elections in a year or so,” says Fyodor Lukyanov, editor of Russia in Global Affairs, a Moscow-based foreign policy journal. “Most likely that will be synchronized with some reset of the union state, with a new position opened up for Lukashenko to be shifted to. The main thing will be for Belarus to remain part of the Russian sphere and continue its integration with the Russian economy.”

Many Belarusians say they are leery of Russian involvement, and fear that Moscow’s priorities will not align with those of the Belarusian people.

“I believe that the Kremlin is considering various options to ease Lukashenko out while increasing Russia’s influence in Belarus,” says Yaroslav Romanchuk, a political activist who ran against Mr. Lukashenko in elections 10 years ago and now heads the Mizes Center, a liberal think tank in Minsk. “But Russia needs to find a credible solution, one that does not ignore the will of Belarusian society. Any good plan must include a humanitarian component, that frees political prisoners and punishes the culprits responsible for the past month’s repressions. So far we do not see any Kremlin support for these demands. Supporting Lukashenko is not the way. …

“Lukashenko’s trip to Moscow may facilitate dialogue, or not. But this conflict isn’t going to die down. The demand is already too strong among Belarusians for freedom, democracy, and revenge.”