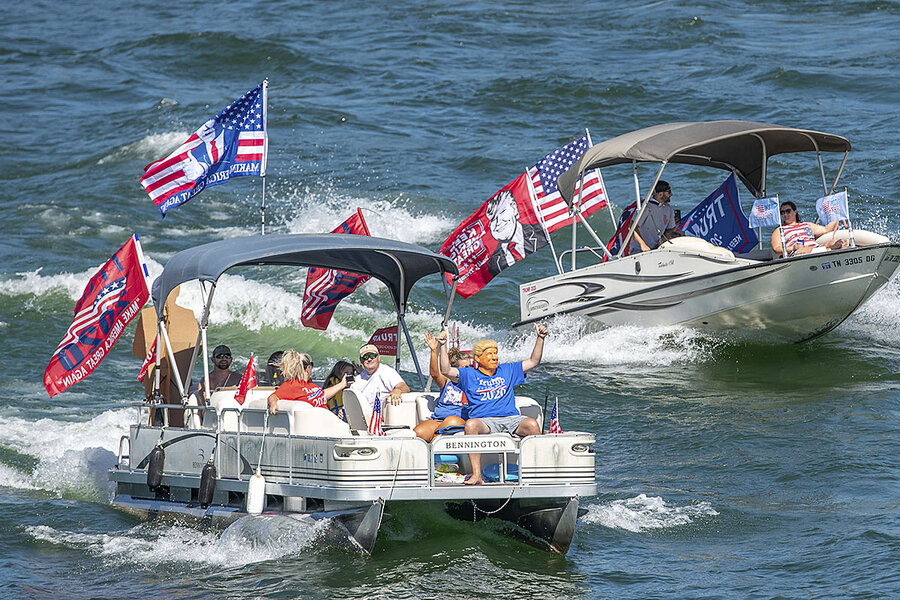 Shannon Canady’s buddies made a to-do of showing him something before their big trip to the beach for Labor Day. They even had him close his eyes.

This is what he saw when he opened them: A large flag showing President Donald Trump astride a tank, muzzle blazing.

On Saturday, Mr. Canady and his crew mounted the flag on a broom handle atop his pontoon boat and lit out from Tybee Island, the easternmost point of Georgia.

Their destination? Pelican Island, a small sandbar and local party spot. There, after a 10-minute steam, they became part of a 2020 innovation: The political flotilla – or, if you will, the “Trumptilla.”

In doing so, they joined thousands of boats flying Trump flags that took to America’s waters this weekend, at one point so enthusiastically that several boats capsized during a rush of horsepower and props at a Texas lake. (No one was hurt.)

The goal, participants say, is chiefly camaraderie and fun, with a bonus of built-in social distancing. The flotillas have in some sense replaced Mr. Trump’s political rallies, from which the president appears to draw political and personal strength.

They are also a floating example of the uniqueness of this presidential campaign, where passions are running high in a polarized electorate but many normal activities remain curtailed amid the persistent pandemic.

“This flotilla just shows how a lot of people are so emotionally invested in this election,” says Mr. Canady. “Honestly, it’s a bit much sometimes. It’s like we’re living in two different worlds.”

Trump-flag-flying cruise boats have been landing here on Pelican Island since May. The “Trumptilla” phenomenon emerged in Southern states this spring, then moved north as the weather warmed onto the lakes of the Northern rust belt and the coast of Maine.

The Trump campaign has often referenced the boat parades, suggesting that they represent political energy that the Democrats can’t muster. President Trump himself has embraced what he calls his “beautiful boaters” and implied that the size of the flotillas is evidence he can’t possibly be trailing Democratic nominee Joe Biden, whatever polls say.

“It’s a new form of political expression and participation,” says Todd Belt, coauthor of “The Post-Heroic Presidency.” “It’s a little bit of owning the libs, it’s part of being on ‘Team Trump,’ flying your colors, and flags wave really well behind the boat. It’s performative politics.”

Is it indicative of anything larger? Republican consultant Tim Miller calls the notion that boat owners could swing the election “farcical.” Yet they are not an insignificant demographic. There are 12 million registered boats in the U.S. States with the largest concentrations of boat registrations are also battlegrounds, including Michigan, Wisconsin, and Florida.

The Trump boat parades might connect with some non-traditional voters, says Mr. Miller. They are a kind of blue collar activity that might motivate a few people who sat out last election to vote in 2020.

“It’s part of a broader effort [by Trump] to kind of sink his hooks even deeper into the cultural side of exurban, rural, white communities. That’s his path,” says the GOP consultant.

In a way, the Trumptillas – and other organized flag-and-banner waving events – are a return to the political culture of the 1800s, says Marc Hetherington, a political scientist at the University of North Carolina, in Chapel Hill.

Back then, before television and smart phones and even cinemas, organizing a parade for a candidate was a big thing.

For the most part, “it’s a great way to celebrate,” says Mr. Hetherington, coauthor of “Authoritarianism and Polarization in America.” “There’s not that much to do [in a pandemic], so we find other things to occupy ourselves, including lots of political expression.”

But there are risks, as the flag-waving Trump performative political movement has come to include armed people in trucks, says Mr. Hetherington.

Trump’s political style includes stoking up his base with images of violence. On Twitter he has unapologetically retweeted video of Trump supporters attacking protesters in Portland, falsely suggested that images of a New York subway assault were connected to Black Lives Matter or Antifa, and defended Kyle Rittenhouse, the 17-year old charged with murder for killing two protesters in Kenosha, Wisconsin.

On Monday, over 1,000 people taking part in a Trump-flag-flying “truck cruise” in the Oregon suburbs clashed briefly with racial justice protesters.

“Passion is great. Passion with guns is another story,” says Mr. Hetherington, though he adds that, “I would think chances for confrontation on the water are pretty low.”

Still, political boat flotillas are undoubtedly a mix of pomp and provocation. The music and engines are loud. The flags are big. Some – such as Mr. Canady’s – have weapon imagery.

“We see [parade flotillas] as symbolic activities, but they send a signal of, ‘We are ready for the oncoming fight,’” says J. Michael Bitzer, a political historian at Catawba College, in Salisbury, North Carolina.

The flotillas, like the overall Trump political coalition, are also predominantly white. At least some of the president’s supporters see themselves as defenders of white America as the country approaches a demographic tipping point where white people are likely to lose majority status within the next half century.

“Is it innocuous to have a flotilla that looks like a battle army? Is it innocent to have these souped-up trucks as loud as trains [rolling into Portland]?” says Jennifer Mercieca, author of “Demagogue for President: The Rhetorical Genius of Donald Trump” and a professor of communications at Texas A&M University.

“If you take them seriously, they say, ‘What? We’re just listening to the Beach Boys with Trump flags. You think we’re dangerous?’” says Dr. Mercieca.

Meanwhile, on Pelican Island, the party just kept going. There were large tents, dogs playing, kids digging in the sand. The shindig became so popular that anchoring spots dried up.

Floating in the lukewarm sound with a cool drink, Jim Mathews of Dublin, Georgia, took in the scene with a grin.

“I think Trump wins by a landslide,” he proclaims, despite polls showing the president trailing Joe Biden, the Democratic nominee. On Saturday, a smaller Biden counter-flotilla slipped into the Gulf of Mexico.

“It seems like we’re at loggerheads at the moment, but I think once the election is over the country will go back to something approaching normal,” says Mr. Mathews. “I think we’ll be all right.”