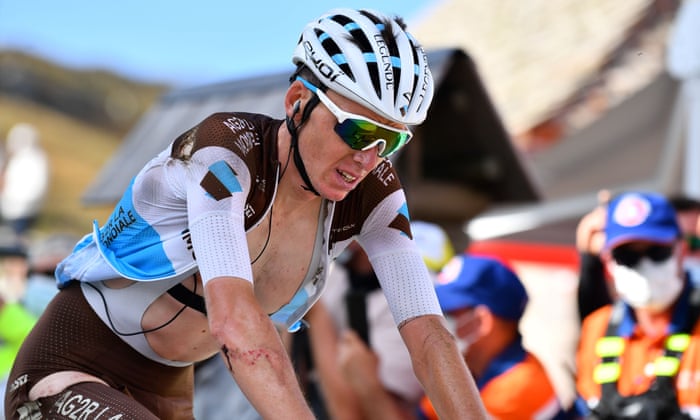 Romain Bardet, the leader of the AG2R La Mondiale team, who had started the Tour de France stage to Puy Mary in fourth place overall, quit the race on Friday night after tests revealed he had a concussion.

Bardet crashed midway through the 13th stage, with around 90 kilometres still to race. After being helped to his feet, he fell over again, but then, supported and encouraged by team staff, he remounted and continued to race, although he had dropped to 11th pace overall by the finish.

“Romain suffers from a concussion, the intensity and signs of which he presented after the stage, required our medical team to have him undergo a brain scan at the Clermont Ferrand university hospital,” his AG2R team doctor Eric Bouvat said in a statement. “This examination did not reveal any lesions. However, it is necessary for Romain to stop his sports activities and he will not be able to start the stage tomorrow.”

Bardet, who finished second overall in 2016 and third overall in 2017, comes from Brioude in the Massif Central, not far from the finish of the stage. “This stage on my roads, was the exact opposite of what I had hoped for,” Bardet said. “The fall was violent, downhill, and I struggled all day. The medical tests confirmed what I was sensing and I’m not able to continue on the race.”

His team manager, Vincent Lavenu, said: “We are all sad to see Romain leaving us, at home, on his roads, in a stage where he dreamed of shining. He showed, once again, an admirable courage and fought like a lion until the end of the stage.”

However, serious questions will now be asked about the medical assessments and protocols that allowed a clearly dazed rider to race on over mountain roads to finish the stage.

Rider safety and the sport’s duty of care to its athletes have been highly controversial issues since the racing season restarted, post lockdown, with a series of high-profile incidents, In recent weeks, riders have been outspoken in their criticism of their treatment and even organised a spontaneous go-slow during the rainswept first stage of this year’s Tour.

Mercedes yet to announce Hamilton replacement after positive Covid result

Euro 2022: Irish qualification on the line as Germany come to town