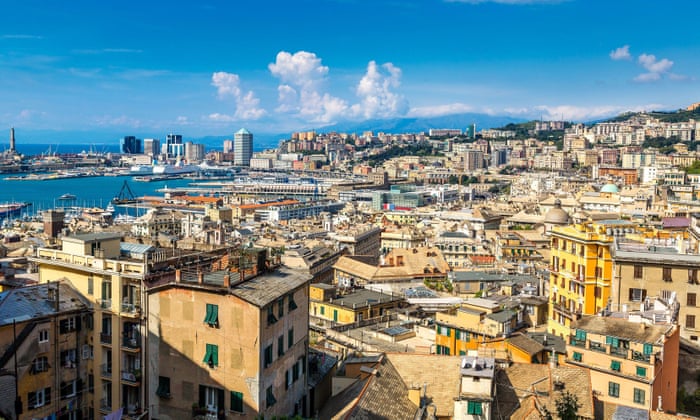 A procession of about 100 people, most of them young, departs from the church of San Martino di Struppa, up a track into the mountains around Genoa. Above, every shade of green; below, the port and the sea, like an aqueous mirror reflecting the blue sky.

There’s history on these steep slopes, and that is why these people are here: the ancient paths were used by partisans during the war, and when they blew up a bridge, severing German troops from their supply lines, the priest of San Martino, Don Andrea Ricchini, was taken to Auschwitz in reprisal. He survived, and – after a funeral had been held, in absentia – returned to serve the parish for 30 more years.

The hike this week – five kilometres up, five down – is part of an election campaign: homage to Fr Ricchini and the partisans, and symbolic challenge to the conservative incumbent (backed by rightwing and neo-fascist parties) in the governor’s mansion of Liguria which, with 12 other regions, goes to the polls in gubernatorial and regional government elections next Sunday.

The elections are a barometer: the first since Italy was hit by Covid. While every nation stands at a fork in the road following the pandemic, Italy feels this more than most: there is widespread national self-examination, much public discourse on what the novelist Giuseppe Genna calls “a confrontation with mortality, which becomes a confrontation with morality; a look back at how we were, and who we are now: ‘What was all that about?’”.

The elections – accompanied by a cumbersome referendum over the number of deputies sitting in parliament – are thus the first measure of whether Italy will open itself to a changed, tolerant politics, or shore up gains by the hard right.

In some regions, the votes are a referendum on the handling of Covid-19, which transcends ideology: the leftist incumbent Vincenzo De Luca of Campania will win easily, after becoming an internet star for his hardline position during the lockdown, as will Luca Zaia, of the rightwing Lega, Italy’s biggest party, in Veneto. 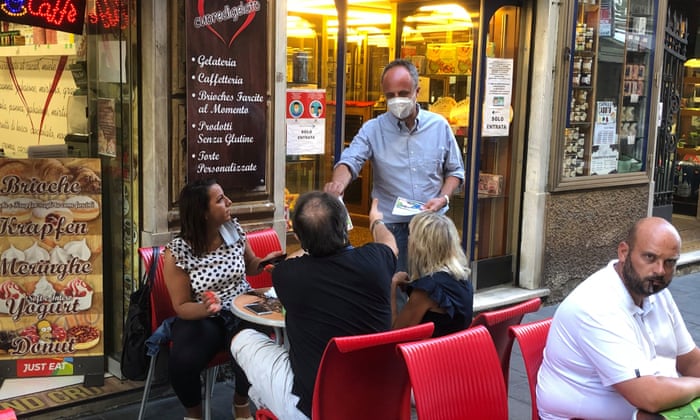 While the centre-left and left are – as usual – riven by argument in a national coalition government, the rightwing alliance holds firm, between Covid-stricken Silvio Berlusconi’s Forza Italia, Matteo Salvini’s anti-immigration Lega and the neo-fascist Brothers of Italy led by Giorgia Meloni, who polls strongly. This is the pact which holds power in Liguria, in the form of governor Giovanni Toti.

But against Toti is pitched an unlikely politician, and an intriguing candidacy. Ferruccio Sansa, who is leading the mountain hike, is a writer, journalist, son of this soil and of a former reformist mayor of Genoa, the poet Adriano Sansa, who tried to fight corruption after the so-called Clean Hands scandals of the 1990s; he lasted a single term.

Sansa Jr has written books and innumerable articles revealing and denouncing corruption. His book Il Partito del Cemento – the cement party – exposed the mafia’s involvement in the construction industry several years before a bridge collapsed in Genoa in 2018, killing 43 (a new bridge was opened last month).

Another – Il Sottobosco, the undergrowth – unmasked corrupt business deals across party lines, including in the Democratic Party (PD) which now backs him, along with the Five-Star Movement and various green parties. But most of Sansa’s writing is poetic and reflective – about the history and natural beauty of the region he would now govern. His latest book, published this month, includes a meditation on swallows. (Declaration of interest: Sansa was a guest reporter at the Guardian in 2007.)

Sansa picked me up at Genoa station in his late mother’s bashed-up blue Fiat, and stopped along the road to tend to a wounded duckling which had fallen from its nest, exposed on the tarmac. Sansa held up traffic to chase and pocket the duckling while drivers waved their approval. It seemed unthinkable that such a man could aspire to sit at the apex of – and reform – Liguria’s political machine. But “that’s the plan”, he says.

At the mountain summit overlooking the Mediterranean, Sansa’s followers take turns to declare their support. Enrico Peschiera, an organiser of the region’s Black Lives Matter and Greta Thunberg’s Fridays for Future protests, says: “We’ve had no voice in parliamentary politics – now along comes Ferruccio, the youngest old man in Liguria.” Sansa is 52. 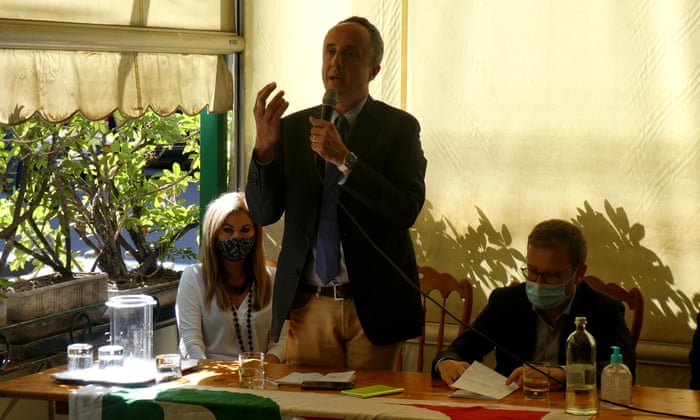 Sansa tells the crowd: “We want to make Liguria, which has the oldest average age in Italy, young again. To create an economy that keeps young people here, rather than drive them to seek work elsewhere. This is not young versus old, because older people need a productive youth to live better themselves.”

This will be a hard fight. The centre-left parties spent a year squabbling over Sansa’s candidature, finally nominating him with only six weeks to campaign. His coffers are dwarfed by those of the incumbent, who campaigns on having built the road bridge (“an outrageous claim”, says Sansa, “it was the corrupt system that made it fall in the first place”) and immigration. Polls have Toti leading by between 14% and 18%, but the gap is closing the more Sansa makes himself visible.

In conversation, Sansa describes the pillars of his post-Covid programme as: “youth opportunity, fighting corruption, the environment, and spending from the post-Covid EU recovery fund on community-based medicine,” the lack of which was laid bare by coronavirus. Liguria had the highest regional deaths per capita, after Lombardy. He says: “I propose a regional economy free of mafia and corruption; we need to stop paving our shores with concrete and work instead with construction companies to build a peripheral road system that serves the region and doesn’t collapse, and invest in the older suburbs.”

Suburbs like Sestri Ponente, a working-class community that once milled steel and built the ocean-going liners “which carried Humphrey Bogart and Lauren Bacall across the Atlantic”, says Sansa – and which he tours at passeggiata time, low sunlight stroking the buildings, church facade and eventide crowds. They were once overwhelmingly loyal to the Communist party, now divided between its descendant, the PD, Five-Star and the Lega.

People initially shun the leaflets, taking one only when they realise whose candidacy it supports. “I remember his father”, says Graziella Borghi, exiting the Milone shoe shop. “He’s a lovely man and I’ll vote for him, but can he govern this mess?”

Sansa exchanges greetings with local sage Adriano Felice at his newspaper stand. Adriano was open throughout the lockdown, “like fort Knox, a ring of carabinieri around me to ensure one customer at a time”.

Felice has read Sansa’s articles, and says: “Everyone who knows him likes him, and he’ll win around here. But I follow all the parties … Sansa is not as well known as the governor, and Salvini and Meloni speak for a lot of people over immigration. It’s the Riviera that Sansa should worry about, towards Savona to the west, La Spezia to the east.” He’s right.

The young PD minister for territorial cohesion, Giuseppe Provenzano, arrives to support Sansa at a meeting in the arcade of the glorious fin-de-siècle Gran Caffè Defilla in Chiavari – a juridical and administrative hub, and coastal tourist town.

“We cannot turn our country into one big Airbnb,” says the minister, insisting that “Covid-19 gives us a chance to rethink how we govern Italy, and Liguria”. Sansa says: “Land and sea, sea and land. That’s what has always made us who we are in Liguria, and I propose a revolution: not against anyone, but for a different quality of life, post-Covid. It has to be about material things, and the economy, but also about values, and who we are.”

The audience, sipping Aperol spritz aperitifs, applauds, but the red and white plastic tape separating it from the usual Sunday regulars is political as well as physical. “He’ll allow in more immigrants,” says Giorgio Robecchi, putting down his paper (Berlusconi’s il Giornale). “I’d rather trust the Lega, and Meloni,” snaps a lady called Mariella buying ice-cream for her children.

The duckling Sansa rescued died. “Let’s hope that’s not an omen!” says Sansa with a sigh, as he heads to the next encounter. “There’s time yet.”