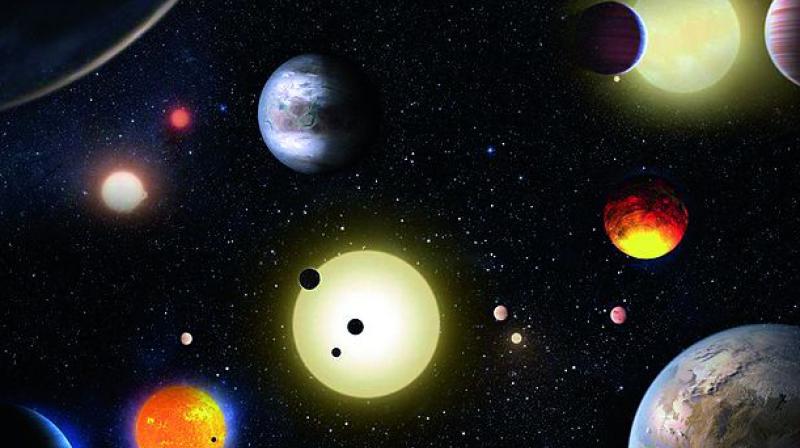 A remarkable positioning of six planets in their own houses-the rarest of rare phenomena will be witnessed for 51 hours, 48 minutes from 10.37 am of September 13 to 2.25 pm on Tuesday (September 15).

Such positioning of planets was not witnessed for centuries together. According to noted astrologer and Almanac writer P. Srinivasa Gargeya, he had verified 400-year-old positioning of planets, but he has never found such a positioning. Planets like moon (Cancer), sun (Leo), mercury (Virgin), jupiter (Sagittarius), saturn (Capri-corn) and mars (Aries) are in their own houses.

Speaking about Sunday’s planet position, he said that it brings bad omens for mankind. It may result in outbreak of several viruses, imprisonment of prominent personalities, national calamities, among several such bad signs. However, he said that people should make a conscious effort to control their pride and egos and they should not take any hasty decisions during this period.

He said that people should cultivate a spirit of surrender and worship of the planets and then the beneficial imp-act of the moon on the mind and the impact of mercury on the intellect in particular can be felt.

Drukh Siddantha Almanac Writers President H. Subrahmanya Sarma said that though the six planets are positioned in their houses and symbolise bad signs, people need not worry as the planets are in a weakened position. He said that due to last December’s eclipse, many of the planets were positioned in one Rasi, but now they are dividing each other and positioning in their houses.

Bhuvaneswari Peetam chief and prominent Almanac writer Chinta Gopi Sarma found fault with some of the suggestions of the astrologers about the stoppage of performing rituals to their ancestors. He said that the present days are considered as Mahalaya Pakshas’ and this is auspicious for performing obeisance to manes for their ancestors.

Former president of Drukh Siddantha Almanac writers G.M. Pattabhi Sastry said that the rare phenomena is not a good sign for the world as there will be an economic crisis and the problem of unemployment would worsen.