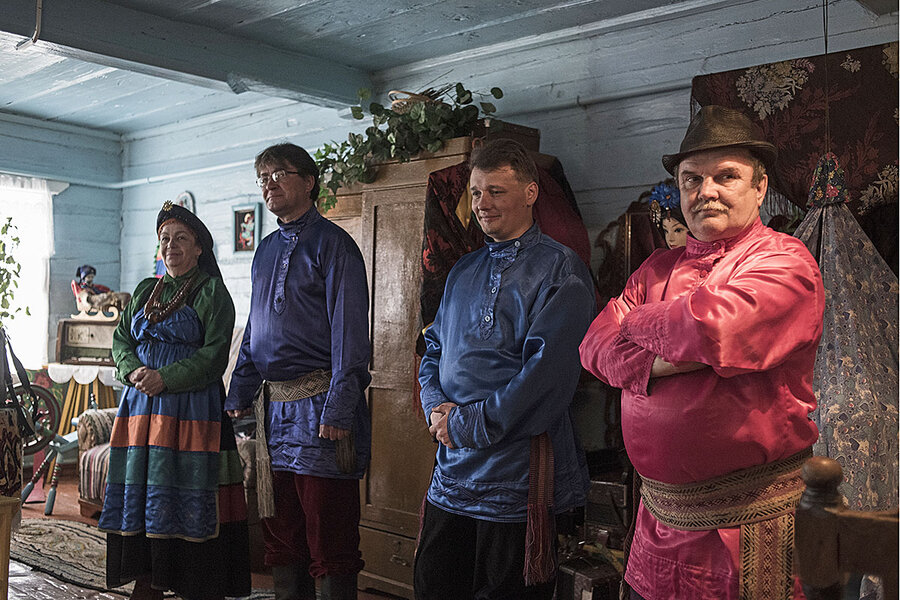 This sprawling village, set in a green mountain valley in southern Buryatia, is an unmistakably Russian place.

It’s noticeably different from nearby communities of cattle-breeding, mostly Buddhist ethnic Buryats. Solid Siberian-style izba log houses are framed by large garden plots and dirt streets, with a small white Christian church at the center. The houses have brightly painted gables and fences, the gardens are laid out in military-straight rows, and everything looks freshly repaired.

Tarbagatay, Russia, is one of the largest surviving communities of Old Believers, religious dissenters who were violently repressed and twice exiled by the czars. They finally found refuge amid the wilds of Siberia 250 years ago. They survived by keeping to themselves, stubbornly maintaining their faith – which, to an outsider, doesn’t look too different from standard Russian Orthodoxy – and working hard.

Seventy years of Communist repression nearly finished them off, but since the Soviet Union’s demise they have been painstakingly reviving the unique medieval traditions of prayer, song, cuisine, dress, and handicrafts that are now protected by UNESCO as “Intangible Cultural Heritage.” They’re restoring their once-shattered communities. And they’re being welcomed back into the greater Russian community, even at the highest level; last year President Vladimir Putin paid a courtesy call to the Old Believers’ spiritual center at Rogozhskaya Zastava in Moscow, the first such gesture of reconciliation by a Russian leader in 350 years.

“My ancestors came here in the 18th century from what is now Belarus. There were only Buryats here, the climate was ferocious, and those first years must have been really hard. They were farmers, the Buryats were cattle-breeders, so they traded together and mostly got along,” says Lyubov Plastinina, head of the Center of Old Believers, a museum complex in Tarbagatay. “Our ancestors chose places between the mountains, and avoided the open steppe where the Buryats lived and raised cattle. They lived in a separate way and didn’t mix much. Our cultures were too different. But we have managed, peacefully, for 250 years now.”

Exiled by the czars

Ms. Plastinina, like most Old Believers, can trace her family lineage back to those Russians who rejected the religious reforms launched by Patriarch Nikon in 1652. The reforms were meant to modernize the rites and prayers of the Russian Orthodox Church by bringing them into line with those of the Greek Orthodox mother church. They included alterations that might seem minor to people today: substituting a three-fingered sign of the cross for the old two-fingered one; altering the way the name “Jesus” was spelled in Russian; and changes in modes of baptism, liturgical texts, and the number of hallelujahs to be chanted during services.

But thousands of Russians fiercely resisted the reforms, labeling them as the work of the Antichrist. In response, they were brutally persecuted by the czar’s secret police. Denounced as “schismatics,” their leaders were arrested, tortured, and executed, while many fled Russia altogether.

Most went to present-day Belarus and Poland, which was then run by the Catholic Grand Duchy of Lithuania. But Russia expanded westward into those territories in the next century, and the Old Believers were rounded up again, this time sent into permanent exile in distant Siberia. They were the first of many subsequent waves of Russian dissidents to suffer that fate. Some fled in different directions, and today communities of Old Believers can be found in over 20 countries.

“Our people do well everywhere,” says Sergei Petrov, head of the Cultural Society of Old Believers in Ulan-Ude and author of a book on the sect’s history. “They form tight communities. And they prosper for two reasons: faith and hard work.”

During czarist times in Siberia, the Old Believers were mostly left to themselves. Barred from state service, they became merchants, artisans, and farmers. But the Bolshevik Revolution brought a new wave of repression. Before it, there were 81 Old Believer churches in what is the present-day territory of Buryatia. All were subsequently destroyed, while many clergy and unbending believers disappeared in successive waves of Soviet persecution. The Soviet hammer fell equally on all religions, eliminating many of the Orthodox churches and Buddhist datsans (temple complexes) as well.

Although as much as 20 percent of Buryatia’s population is descended from the original 40,000 Old Believers who were exiled here, regularly practicing Old Believers today number barely 10,000, with just 10 working churches. Most blame the Soviet era for the destruction of their historic community.

“Strong believers were rounded up, imprisoned, and shot by Soviet police,” says Mr. Petrov. “Many others just drifted away from the faith. There is a revival going on now, but it’s very slow and difficult.”

A return to Russia’s fold?

The Rev. Sergei Paly is the priest at Tarbagatay’s tiny Krestovozhdvizhenskaya church, one of the first Old Believer churches to be restored after the Soviet collapse. On a typical June afternoon, he is deep in conversation with a group of Russian tourists, who are quizzing him intensely over the nuances between the Orthodox faith with which they are familiar and the beliefs and practices of Old Believers. They seem curious, even fascinated, and not the least bit unfriendly. As they file out of the little church, many place donations in the collection box.

Father Sergei, who’s been a priest for about 25 years, says there is no animosity between the churches anymore.

“We have no relations with the Orthodox Church. The people found peace and safety in Siberia, even though the ruling church continued to persecute us. We were allowed to pay our taxes and serve in the army [in pre-Bolshevik times]. That was all,” says the priest. “Our goal now is to preserve what we have and who we are. The Orthodox Church is in its place; we are in ours. I have no idea what they think of us. And that’s good. We live very well now.”

Since Mikhail Gorbachev embraced the Orthodox Church on the millennial anniversary of Christianity in Russia in 1988, the Kremlin has made serious efforts to normalize the state’s relations with religious groups. That has worked out very well for the Orthodox Church, which has seen much of the property nationalized by the Bolsheviks restored to it, and has enjoyed a massive boost in its public profile and influence. Russia’s other three constitutionally recognized “founding religions” – Islam, Judaism, and Buddhism – all enjoy some measure of official favor these days.

That is not the case for faiths that are viewed as foreign imports, such as Baptists and Jehovah’s Witnesses, who face overt hostility from the Orthodox Church and ongoing police crackdowns. The Catholic Church, which had similar problems in Russia for several years, appears to have patched up its differences in a 2016 meeting in Cuba between the Russian patriarch and the pope.

But, experts say, Old Believers are viewed as an indigenous faith, an offshoot of Russian Orthodoxy, and therefore to be embraced by political authorities.

“Putin is a pragmatic politician,” says Alexei Kombaev, a political scientist at Buryat State University in Ulan-Ude. “He accepts that religions should be allowed to develop freely, or they will go underground. By smiling upon all of them, he enhances the legitimacy of the state.”

Old Believers, famously insular and suspicious of outsiders, are increasingly willing to open up to visitors, says Plastinina. Indeed, her organization, the Center of Old Believers in Tarbagatay, is a cooperative venture between the local community and the Buryat government.

“Times are changing very fast, and we need to adapt,” she says. “When I started my higher education [in Soviet times], we were studying atheism. By the time I finished, we were studying comparative religions. The one constant thing, through all of it, is that we always believed in God and kept our faith alive.”

Internet slowness: Is it hampering the pandemic recovery in Britain?