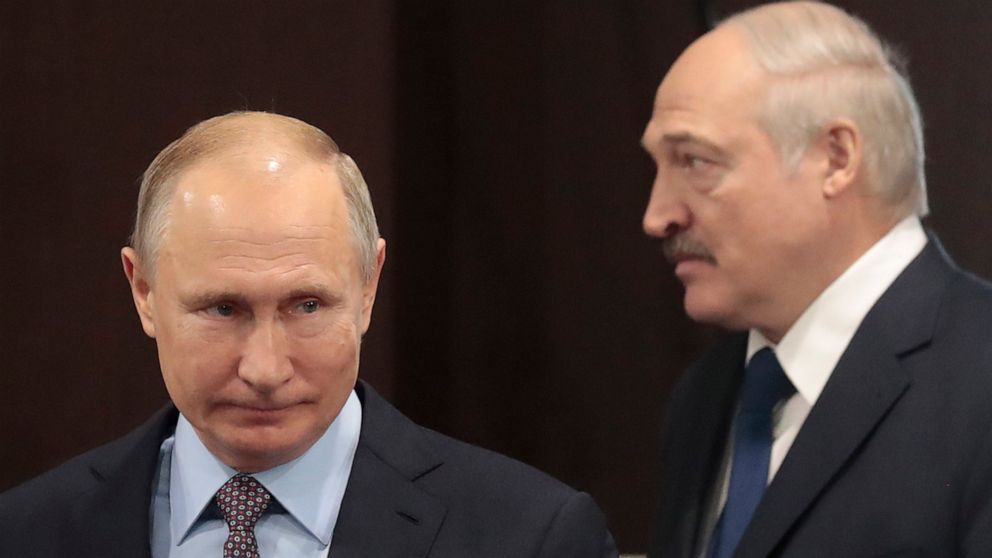 Belarus’ leader Alexander Lukashenko flew to Russia to meet with president Vladimir Putin for talks on Monday amid ongoing protests at home and fears among the Belarusian opposition that he might cede parts of the country’s independence in return for the Kremlin’s support.

Lukashenko and Putin met on Monday in Sochi on Russia’s Black Sea — where Putin has a residence — for the talks that were announced last week.The two leaders appeared in front of cameras, sitting in two chairs to deliver remarks, where Lukashenko thanked Putin for Russia’s backing already during the weeks of protests that have called for an end to his 26-year rule in Belarus.

“First of all I want to thank you,” Lukashenko told Putin. “You acted very decently and as a a human being,” he said. “You find out who your friends are during trouble.”

In recent weeks, Putin has thrown Russia’s support behind Belarus, signaling it will not tolerate his removal by force and warning it could send a “reserve” of security forces into Belarus to protect him if the protests — which have been very peaceful — seek to topple him violently.

In Sochi, Putin reiterated that Russia will fulfil all its treaty obligations to Belarus, including a mutual security agreement that both men have previously cited as possible grounds for Russia sending security forces to Belarus if needed.

“We look at Belarus as our closest ally and, without question, as I have more than once told you by phone, we will fulfill all the obligations we have taken on ourselves,” Putin said. He added that he believed the situation in Belarus must be resolved without any outside interference.

Putin also said Russia would give a $1.5 billion state credit loan to Belarus, a major economic lifeline for Lukashenko.

He also noted that Russian troops had begun a planned military exercise in Belarus on Monday called ‘”Slavic Brotherhood”. Putin emphasized that the exercise had been planned for a year and said the troops would return to Russia afterwards, but said that joint exercises between the two countries’ military were set to occur most months.

Lukashenko has painted the protests as part of an imminent Western invasion, making false claims that NATO troops are on Belarus’ border.

The two men’s meeting comes after tens of thousands of people again protested in Belarus’ capital Minsk and other cities on Sunday demanding an end to Lukashenko’s rule for the fifth weekend running, despite a massive deployment of security forces.

Hundreds of heavily armored riot police again sealed off parts of Minsk, in places moving to aggressively to detain them, and in another city using water cannons against a peaceful crowd. Belarus’ Interior ministry on Monday said over 700 people had been detained during the protests.

The protests have continued for weeks since they were triggered by Belarus’ presidential election on August 9, which gave Lukashenko over 80% of the vote, amid allegations of widespread ballot fraud, and the demonstrations ballooned following a brutal crackdown by security forces.

Smaller demonstrations have continued on most weekdays and then turn into huge crowds each Sunday. In recent days, after pulling back from demonstrations for the first few weeks, security forces now have been cracking down again.

A huge column of protesters in Minsk on Sunday sought to peacefully march to a suburb where Lukashenko and other top officials have houses. Most of the column was blocked by police, but some protesters succeeded in reaching Lukashenko’s press secretary’s house, where they were attacked by masked officers, who a video showed him appearing to throw stun grenades.

In Minsk, riot police and masked officers attacked some groups of protesters, dragging people into vans and clubbing some. Masked officers in unmarked uniforms in some places were filmed leaping from vans and grabbing demonstrators at random and in the western city of Brest, police turned a water cannon on a peaceful crowd.

Russia for years has pressed Lukashenko to accept greater economic and political integration for Belarus with Russia.

The two countries are already connected via the so-called “Union State” treaty, but which in reality has mainly existed on paper for two decades but which potentially envisages Belarus and Russia having a single currency and central bank among other things.

Lukashenko has resisted those efforts, straining relations with the Kremlin in the last two years. But now dependent on Moscow for his political survival, many observers believe Russia will seek to push Lukashenko into making concessions, in what some have suggested could amount to a “soft annexation” of Belarus.

Belarus’ main opposition leader, Svetlana Tikhanovskaya, who ran against Lukashenko in the presidential election and has since declared herself the country’s “national leader”, on Monday warned Putin that any agreements he made with Lukashenko in Sochi would be illegitimate.

“I want to remind Vladimir Putin, that whatever you accept and whatever you agree during the meeting in Sochi it will not have nay legal force. All agreements signed with the illegitimate Lukashenko will be re-examined by the new government,” Tikhanovskaya said in a statement released by her team in Lithuania where she was forced to flee days after the election.

“I greatly regret that you have decided to hold dialogue with the usurper and not with the Belarusian people,” she said.

Lukashenko and Putin in their public remarks in Sochi said little concrete about the “Union State” beyond agreeing on the need for greater economic cooperation and reaffirming their determination to continue joint work in the defense sector.

Lukashenko laughed at what he said was a “lot of conspiracy thinking” around his meeting with Putin. He dismissed the protests, telling Putin things in Minsk were not as they appeared in the media, but said “the main thing is not to cross the line.”

“There are red lines which no one has the right to cross,” Lukashenko said, an apparent reference to the use of force. “But for now no one has crossed those lines.”

“But we’ve demonstrated our firmness,” he said. “And what’s nice — I’m very grateful to you for this — you have demonstrated that the Belarusian border is the border of the Union State.”

Putin said he supported Lukashenko’s proposal to consider changing Belarus’ constitution soon, saying it was “timely” and “appropriate”. Lukashenko has repeatedly spoken vaguely about convening discussions around changing the constitution but without the participation of the opposition, who have dismissed the suggestion as a stalling tactic.

Russia has already provided some support to Lukashenko. Last month, it sent journalists from Russian state media to replace workers who were striking at Belarusian state television.

The protests in Belarus have not been anti-Russian or founded on pulling the country away from Moscow and closer to Europe, with the opposition and most demonstrators saying they believe Belarus must have strong relations with Moscow. But Putin’s decision to back Lukashenko as he seeks to quash the protests could change attitudes.

Many analysts believe the Kremlin is not enthusiastic about Lukashenko as a partner and in the long-term could seek a managed transition that would see him replaced a by pro-Russian politician more acceptable in Belarus.

But in the short-term, the Kremlin has made clear it will not tolerate him being toppled by protests on the street.

The European Union and the United States have condemned the use of force against demonstrators and most European countries have refused to recognize Lukashenko’s re-election.

Last week, U.S. Deputy Secretary of State Stephen Biegun warned that Russia’s decision to throw its backing behind Lukashenko “risks turning the Belarusian people, who have no grievance with Russia, against Moscow.”

The U.S. and the EU have said they are preparing to impose targeted sanctions against individual Belarusian officials deemed responsible for the election fraud and the violence. Germany’s government on Monday said it hoped the EU sanctions would be finalised next week, after foreign ministers from the bloc’s member states meet in Brussels. The U.S. has said it is coordinating sanctions with the EU but that both may go ahead with imposing them without waiting for the other.

Why global hegemony was the worst thing to happen to America