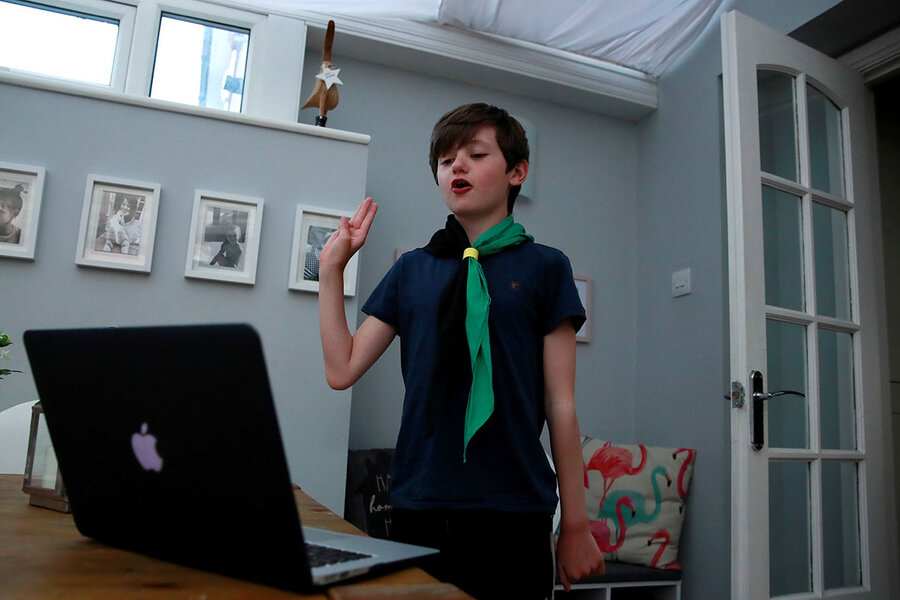 Lucy Alexandra Spencer dials in and her voice is crystal clear. She could be sitting a mere socially distant 6 feet away. Instead, she’s by a small medieval town in Austria overlooking the Alps on summer vacation. The former teacher-turned-online tutor takes advantage of exceptional internet connections.

But when she’s back at her British home in Berkshire, on the outskirts of London, internet speeds are dire enough that Ms. Spencer uses her cellphone as an internet hotspot and carries extra portable Wi-Fi to ensure as little disruption occurs as possible for her online courses teaching hundreds of children at a time. It all amounts to high monthly costs to stay connected in the United Kingdom.

“It’s a bit mad having so many backups, but being reliable is super important,” she says. “I had two lessons over the whole of lockdown which had to be rescheduled because of connectivity issues.”

Britain’s internet speeds lag behind those in many smaller, less wealthy nations. According to a report by the European Commission, high-speed broadband in Slovenia and Lithuania eclipses that across Britain. Estonia, with a gross domestic product of $30.7 billion – a fraction of Britain’s 2018 GDP of $2.3 trillion – trumps the U.K. for breadth and speed of online connectivity.

And Britain’s patchy internet connections both cause and expose inequalities across British society. These have become even more apparent under the COVID-19 lockdown. Owners of land, property, and businesses in rural England and Wales are concerned that poor connectivity could hamper Britain’s economic recovery as the country claws back from its biggest economic plunge in more than 300 years.

How a pandemic exposed – and may help fix – inequalities in education

“Our coronavirus economy relies on people being able to work from home, yet millions are effectively stuck in the Middle Ages through no fault of their own,” says Samuel Bright, an editor for a digital startup magazine.

Britain’s problems go back to the 1980s. The privatization of state-owned assets, including telecoms, effectively created a conglomerate of companies offering high prices and little differentiation. Internet cables to this day often use existing copper wires originally designed for telephones, and which are cheap to maintain.

Wind and rain can cause outages, while signals peter out if residents have the misfortune of living at the end of phone lines. It can make everything from video calling or watching movies to accessing vital services frustrating.

Lottie Reeves lives on a boat traveling along southern England’s canals, and combines working as a web developer with running an online community for female travel bloggers. “I started my business from a caravan [camper] in South Africa and often joke I had a better connection there,” she says.

Areas in northern England, southwest England, and much of Wales suffer from little to no internet connectivity whatsoever.

Mr. Bright previously lived in London but returned back to his hometown of Huddersfield during the pandemic lockdown. He says connectivity in towns and cities in northern England isn’t so different until you step beyond central areas. “When you venture into more remote areas, it’s like stepping into a time machine – you’re effectively cut off from the outside world.”

He fears poor connectivity has compounded isolation and depression for rural Britons, both old and young, “a swath of the population who’ve suffered more than most,” he says. “Ironically, they are exactly the same people who’ve been saddled for decades with poor transport links, crumbling infrastructure, and dying industries.”

Poor connections also threaten agriculture. “Farms use online resources with increasing intensity, and many rural businesses take advantage of online communication to market and supply goods and services,” says Nigel Hollett, director of the Country Land and Business Association, which represents businesses and landlords in rural Wales and England.

With the rise of home schooling in lockdown, Britain’s poor connectivity is also hampering children’s opportunity to get a quality education, says online tutor Zoe Hughes from her home in Devon, southwest England.

“Disadvantaged kids are already discriminated against for their financial situation, then to put them in a rural area where there are fewer opportunities to connect is a disaster waiting to happen,” she says. “If you’re reliant on charitable food banks, you don’t have £30 per month to spare.”

Many of her pupils live in socialized, local authority housing across Dartmoor, a region on the south coast known for having some of the highest value properties in the U.K. “It’s not like these are middle-class folk who escaped London to live in the country,” she says. “There are locals born and raised in working-class housing. … If there’s no decent Wi-Fi, you’re hammering home disadvantage.”

Connectivity inequalities aren’t as simple as a battle between a “super connected” London versus the rest of the country. The issue, as many Londoners attest, is patchy.

Elizabeth Lusty suffers regular outages from her West London home in Ealing, just 10 miles west of Buckingham Palace. She runs VChoir, a virtual choir business, but low speeds damage the singing experience and cause people to drop out and, in turn, dent her income.

“I can’t offer refunds. I don’t have that leeway at the moment. People are annoyed if there’s a bad internet connection, but it’s out of my hands,” she says.

Virtual singing has become a lifeline for her singers, given many of them are retired people, live with dementia, or care for their adult children. Poor connections, she says, exacerbate isolation and mental health issues.

There are spots of progress. Cornwall, located next to Dartmoor, boasts some of the fastest fiber-optic broadband connections in the world thanks to £53.5 million ($71 million) in funding from the European Union. Britain’s decision to leave the European Union shuts the door on additional EU funding, however.

Progress cannot come fast enough for radio presenter Meera Sharma. She used to live in the United States, “where the connection is so much better.” Back in Britain with her family, she’s left embarrassed with patchy connections disrupting on-air interviews.

“The amount we’re all paying … the government needs to do better,” Ms. Sharma says as the call drops out momentarily. “Britain needs to drag itself into the 21st century.”

Once banished by czars, a centuries-old sect finds new life in modern Russia