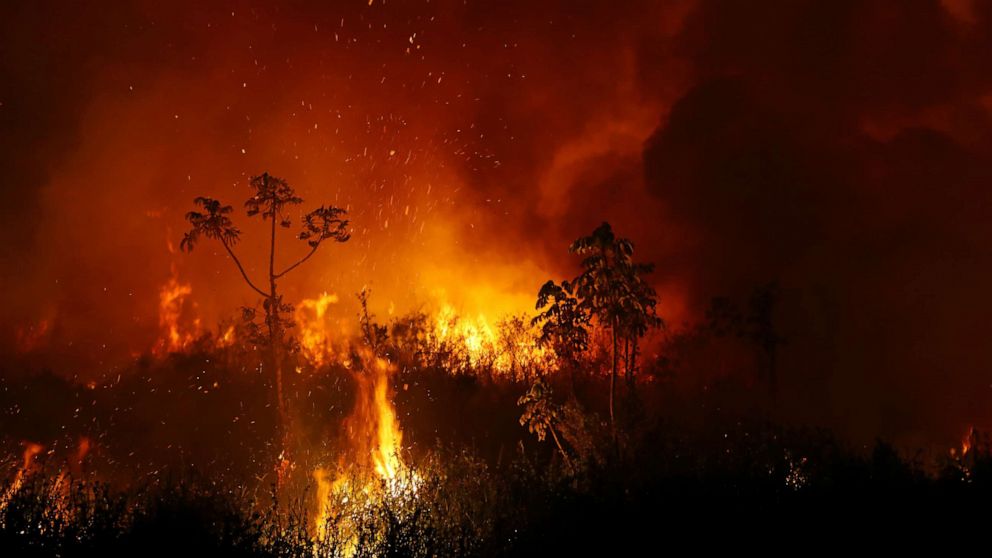 A fire has been burning since mid-July in the remote wetlands of west-central Brazil, leaving in its wake a vast, charred desolation bigger than New York City.

A team of veterinarians, biologists and local guides arrived in late August to prowl the bumpy dirt road known as the Trans-Pantanal Highway in pickup trucks, looking to save what injured animals they could.

Jaguars were wandering the blackened wasteland, they said, starving or going thirsty, with paws burnt to the bone and lungs blackened by smoke. They saw bodies of alligator-like caiman, jaws frozen in silent screams, the last act of creatures desperate to cool off before being consumed by flames.

This massive fire is one of thousands of blazes sweeping the Brazilian Pantanal — the world’s largest wetland — this year, in what climate scientists fear could become a new normal, echoing the rise in climate-driven fires from California to Australia.

The Pantanal is smaller and less known than its famous cousin, the Amazon jungle. But the region’s normally abundant waters and strategic location — sandwiched between the rainforest, Brazil’s vast grasslands and Paraguay’s dry forests — make it a magnet for animals.

The fires are now threatening one of the most biodiverse ecosystems on the planet, biologists say. The Pantanal is home to roughly 1,200 vertebrate animal species, including 36 that are threatened with extinction. Across this usually lush landscape of 150,000 square kilometers (57,915 square miles) in Brazil, rare birds flutter and the world’s densest population of jaguars roam.

Fire is not new here. For decades, ranchers have used flames to cheaply return nutrients to the soil and renew pasture for their beef cattle. But those blazes, fueled by drought, now burn with historic force, racing across desiccated vegetation. The biggest fires in the Pantanal this year are quadruple the size of the largest fire in Brazil’s Amazon rainforest, NASA satellites show.

A record 23,490 square kilometers have burned through Sept. 6: nearly 16% of the Brazilian Pantanal, according to a Federal University of Rio de Janeiro analysis.

Last month, Reuters witnessed a fire that flashed from forest to pasture near the tourist gateway of Poconé in Brazil’s Mato Grosso state. The rush of air sucked in by the blaze spun a strong wind into a tornado of smoke. The temperature on the ground soared to 46.5 Celsius (115.7 Fahrenheit).

Dorvalino Conceição Camargo, a 56-year-old farmhand in a straw hat common among local cowboys, helped beat back the flames.

Sweating from the effort, Camargo said he had never seen fires this bad. “Everything is suffering,” he said.

The Pantanal is known for being wet, not dry. The world’s largest flood plain normally fills with several feet of water during the rainy season from around November to April each year.

Camargo recalled navigating the waters as a child in boxy canoes. Back on the ranch where he works, he showed the farm’s high-water mark — 70 centimeters (2.3 feet) off the ground — hewn into the post of a cattle corral. Even in a dry year it’s typically about half that, he said.

This year, the floods never came. Only a little bit of water pooled in a ditch nearby, he said. Now, as water evaporates in the dry season, the Paraguay River that traverses the Pantanal has receded to its lowest point since 1973, according to Julia Arieira, a climate researcher at Brazil’s Federal University of Espirito Santo.

Scientists blame the drought on warming in the Atlantic Ocean just above the equator that’s drawing moisture away from South America and will send it north, likely in the form of stronger hurricanes.

NASA scientist Doug Morton said this phenomenon is caused by shifts in ocean temperature known as the Atlantic Multidecadal Oscillation — the Atlantic Ocean’s equivalent of El Niño in the Pacific. Unlike El Niño, which typically happens every two to seven years, the oscillation alternates between hot and cold roughly every 30-40 years.

When it runs hot — as it has been since the 1990s — the warming in the tropical North Atlantic is more likely to occur, contributing to South American droughts and fires.

Changing ocean temperatures are “a likely driver of the dry conditions we’ve seen so far this year in the Pantanal,” said Morton, who leads NASA’s biospheric sciences lab.

Morton said the warm spot could also be contributing to more dryness in the southern part of the Amazon — where fires likely hit a 10-year high in August — and in Argentina’s wetlands, where the blazes are the worst since 2009.

More worrying still, Morton is concerned global warming could disrupt the oscillation and leave it permanently in the warm phase, contributing to more fires.

Even if that does not happen, scientists fear global temperature increases on their own would make vast burning ever more common.

Destruction of the Amazon rainforest to the north is exacerbating drought in the Pantanal over the long term, said Philip Fearnside, an ecologist at Brazil’s National Institute of Amazonian Research. That’s because jungle trees recycle rain and push the moisture back into the air as water vapor, which winds then carry to neighboring regions in so-called flying rivers.

Amazon deforestation has surged 34.5% in the 12 months through July, compared to the same period a year ago, according to preliminary data from government space research agency Inpe.

Bolsonaro’s press office directed questions to the Environment Ministry, which did not respond to ABC News’ request for comment.

“The fires are causing great damage to fauna, flora and to the Pantanal region,” Salles said.

No humans have died in the Pantanal fires, according to Mato Grosso state firefighting Lieutenant Colonel Jean Oliveira, who has been leading all government agencies in the fire response. But, local media on Thursday reported one fatality in the state.

Wildlife, though, has been hit very hard, Oliveira said.

While there aren’t exact counts, thousands of animals have perished, according to biologist Rogério Rossi of the Federal University of Mato Grosso.

The roving veterinary team is able to save only a tiny fraction of the injured animals. Many of these creatures are difficult to catch, as they live far from accessible roads.

Veterinarian Jorge Salomão Jr. rattled off an inventory of the carnage.

In the burned expanse of 1,347 square kilometers (520 square miles) near the town of Poconé, dead snakes are seen every few meters.

Local guide Eduarda Fernandes, who is working with the rescue team, wandered the area, feet sinking into the deep soot.

She picked up a snake petrified in the fire. It had bitten its own flesh, in what a biologist said was likely an involuntary reaction as it sought any escape from the pain of being burned alive.

Reporting by Jake Spring for Reuters.