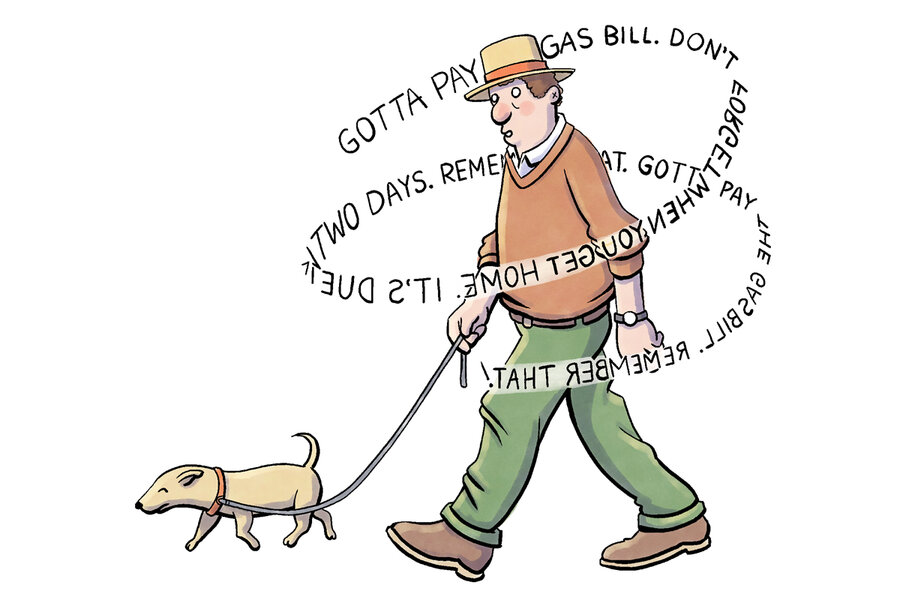 One of my students once expressed a personal concern to me: He said he talked to himself, and this worried him. As a self-talker in my own right, I had words of encouragement for him: People who talk to themselves are geniuses.

OK, I admit it’s something I read online, but hey, there are worse things one can be called, and it did assuage my student’s anxieties. As for me, I long ago made peace with talking to myself, once I recognized its myriad advantages.

For one, it shores up my memory. Take shopping, for example. I’ve found that I can save on paper and ink by memorizing my shopping list. I do this by arranging the items in some appealing manner and reciting my creation over and over, from my front door to the supermarket shelves: “Broccoli and eggs in sparkling water sautéed in butter and yogurt.”

You get the picture.

Last, talking to myself helps me to problem-solve. Recently, I was changing an electrical outlet, something with which I have vague familiarity but do not do on a regular basis. The thing is, I tend to forget which is the hot wire and which is neutral. And so I repeat, “Black is hot, white is neutral. Don’t forget this. And don’t forget to turn the power off.” I’m pleased to report that the project was a success, which I attribute, in part, to my vocalization of all the particulars.

The trick to being a contented and productive self-talker is to be circumspect about doing it in public, lest my genius be confused with madness. I have to admit, though, that it is not as easy as turning a faucet on and off. Sometimes, when I am on the go, I do indeed become self-absorbed and commence my monologue while being part of a crowd. Whether on campus, on a bus, or in a busy store, it doesn’t matter; I’ve often found myself saying something like, “Now don’t forget, when you get home, pay the gas bill. It’s due in two days. Gotta pay the gas bill. Remember that.”

My children grew up listening to me talk to myself. I believe this had a salutary effect on their development: No matter where they were in the house, they could hear me mumbling along, creating lists in my head, staying on task, and working through problems and situations out loud. Now and then, one of them would call out, “Dad?”

Talking to myself, then, had the benefit of communicating that I was in the house and available to them. That’s all they wanted to know.

And so I roll – and talk – merrily along, convinced of the benign nature of my habit and willing to serve as guru and affirmer to those, such as my student, who worry there might be something wrong with them. There’s not. The beauty of self-talking is that one’s words, free-flowing as they are, can lead anywhere, such as today, when I announced – to myself and nobody else – “Now where did I put my keys? I just had them in my hand. They’re not in my pocket. What about the pants I just put in the hamper?”

And there they were.