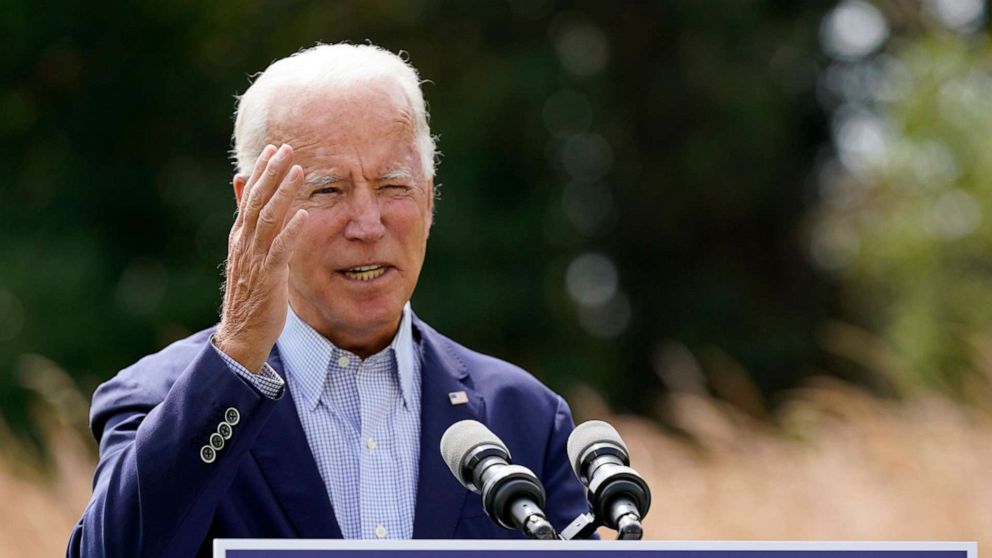 As the devastation from the wildfires raging across the western United States continues into its second week, former Vice President Joe Biden delivered a speech Monday in Wilmington, Delaware, centered around his plans to combat the growing threat of climate change and its contributions to worsening instances of extreme weather around the globe.

Referring to one of Trump’s main arguments in his re-election campaign about the safety of suburbs, Biden said, “You know what is actually threatening our suburbs? Wildfires are burning the suburbs in the West, floods are wiping out suburban neighborhoods in the Midwest.”

By Monday morning, more than 3.3 million acres have been burned in the Golden State this year — more than 27 times more than in 2019, according to the California Department of Forestry and Fire Protection. Firefighters in the state have not seen anything like this season in more than a century, when the Great Fire of 1910 blazed through more than 3 million acres.

The wildfires also claimed the lives of 27 people last week, and officials remain concerned that this week’s weather conditions will not bring a respite to the region.

Throughout his remarks, Biden sought to tie together the president’s response to the coronavirus pandemic and climate change, criticizing Trump for “his disdain for science and facts.”

“Once again, he fails the most basic duty to a nation. He fails to protect us from the pandemic, from an economic freefall, from racial unrest, from the ravages of climate change. It’s clear that we’re not safe and Donald Trump’s America. This is Donald Trump’s America. He’s in charge,” Biden said, co-opting a line often used by the Trump campaign against him.

Biden’s speech, which also emphasized the role that investing in green energy jobs can play in combatting climate change, came as Trump visited California to receive a briefing on the wildfires from local officials near the city of Sacramento.

Preempting Trump’s California stop, Biden argued Trump has “no interest” in confronting the challenge of climate change, saying it’s “another crisis he won’t take responsibility for,” a dig at the administration’s response to the coronavirus pandemic.

“As [Trump] flies to California today, we know he has no interest in meeting this moment. We know he won’t listen to the experts or treat this disaster with the urgency it demands as any president should do during a national emergency,” Biden said, adding, “The West is literally on fire, and he blames the people whose homes and communities are burning.”

Biden cast the response to climate change as a choice between uniting to fight the problem or surrendering and ignoring it.

“We have a choice. We can invest in our infrastructure to make it stronger and more resilient, improving the health of Americans and creating millions of good paying jobs while at the same time tackling the root causes of climate change,” Biden said. “Or we can continue down the path Donald Trump has us on — a path of indifference, costing tens of billions of dollars to rebuild.”

Monday’s remarks were far from the beginning of Biden’s attacks on Trump over the issue of climate change.

In a statement released Saturday, Biden expressed his support for those suffering from the effects of the fires, as well as the firefighters and first responders on the front lines of the emergency, while also blasting Trump for “deny[ing] … reality” on climate change’s role in the ongoing crisis.

“The science is clear, and deadly signs like these are unmistakable — climate change poses an imminent, existential threat to our way of life. President Trump can try to deny that reality, but the facts are undeniable. We absolutely must act now to avoid a future defined by an unending barrage of tragedies like the one American families are enduring across the West today,” Biden wrote.

Biden and Trump have offered vastly different visions when it comes to tackling the issue of climate change.

The former vice president has proposed a sweeping proposal that calls for the United States to achieve a carbon-free power sector by 2035 and make a $2 trillion investment over his first four years in office in green energy and infrastructure to combat the threat of climate change.

Throughout his first term in office, Trump has rolled back a slate of Obama-era environmental regulations, including ones that placed emissions-standards on American-made cars and the Obama administration’s Clean Power Plan, which would have limited carbon emissions from coal and gas-fired power plants, and withdrew the United States from the landmark Paris Climate Agreement.

Despite those rollbacks, Trump declared himself “a great environmentalist,” during a speech in Florida last week, where he announced the extension of a 10-year moratorium on oil and gas drilling off the state’s coast as well as the Georgia and South Carolina coasts.

PMK resurrects demand for 20% quota for Vanniyars in Tamil Nadu

Lol nothing matters. Or does it?