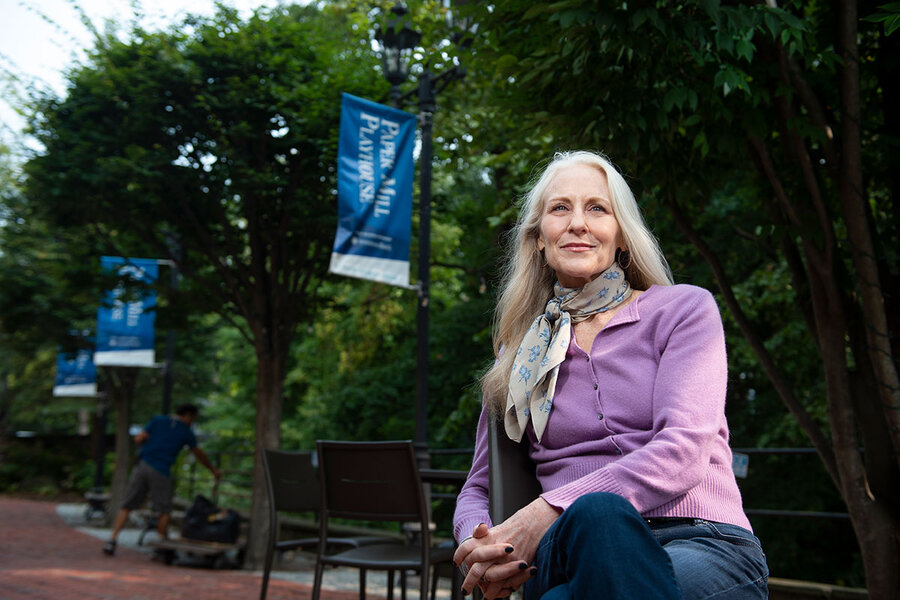 In the first few months of the Broadway season this year, Elizabeth Ward Land was experiencing what she calls a “late-career surge.”

A veteran Broadway performer, she had just begun rehearsals for a prominent role in the musical “Memphis” at a regional theater in Raleigh, North Carolina, reprising a character she played in New York a decade ago. She also had a late-summer gig booked in Nashville, singing in a new production celebrating the struggle for women’s suffrage in 1920.

The biggest thrill came in March, when her own show, “Still Within the Sound of My Voice,” a cabaret-style homage to the music of Linda Ronstadt, won a Bistro Award for best tribute show. Venues were beginning to contact her about booking performances.

But nearly overnight, after accepting her award in Manhattan, her surging career experienced a reversal of fortune as dramatic as any of those in the musicals she’s performed. “I mean, all of these very fun and exciting things were happening, and then it just felt like I hit a wall. Everything was canceled,” Ms. Land says.

“Showbiz has always been a very difficult career to navigate, but it’s never been that my profession didn’t exist,” she continues. “Right now, it just doesn’t exist, and that’s just been kind of a hard concept to grasp.”

It’s been six months since the coronavirus turned Broadway stages dark, twisting the plot lines of Broadway’s once promising 2020 season and shuttering all at once an industry that generates $2 billion a year in ticket sales – a figure that outstrips the combined total of every professional sports team in the New York and New Jersey metropolitan area.

“And if we really do open next March – and that’s when we’re hoping we do open – New York City alone will have already lost the economic impact of almost $15 billion,” says Charlotte St. Martin, president of the Broadway League, the trade association representing 41 Broadway theaters and a nationwide network of regional venues.

The theater district’s glittering marquees account for some 97,000 jobs in the city, says Ms. St. Martin, noting these include workers in the now-dormant restaurants, hotels, and retail shops that depend on the millions of tourists drawn to 42nd Street each year.

But as Broadway performers and others flee New York as traditional backup jobs like bartending and restaurant service dry up, many have headed back to their hometowns.

As a result, many of the industry’s regional theaters have found topnotch talent at their disposal. That’s true for both the streaming performances that have become the new normal for venues trying to scrape by with a fraction of the audiences they’re used to, or as big-name instructors for theaters’ acting schools.

“As the stages across the country go dark, a number of performers have returned to their hometowns, and they have been eager to see what they can do at their hometown theaters,” says Vincent VanVleet, managing director of The Phoenix Theatre Company in Arizona. “And a lot of these folks have been so gracious with their time and doing virtual benefit concerts for us and talking online with our audiences.”

The Academy of Musical Theater in Pittsburgh was able to expand its offerings during the summer, including those for its New Horizons programs, which helps train students with disabilities.

“We had to shift about 200 classes to online learning within four days of the shutdown,” says Mark Fleischer, executive producer of Pittsburgh CLO, the academy’s parent company. “We were able to use a lot of our alumni who became Broadway performers, local artists who we’ve had relationships with early on in their careers and who now teach classes for our students.”

From Broadway veteran to struggling artist

“July is when it dawned on me that it was time to stop expecting things to return to normal anytime soon,” says Matt Castle, a Broadway veteran who has appeared in productions of “Oliver!”, “Camelot,” and others. “It just stopped feeling realistic and it stopped offering any kind of solace.”

Just two days after March’s Bistro Awards, he had been excited to attend an event at the New York Library for the Performing Arts at Lincoln Center, where five of the New York cast members of “Company” planned to have a reunion and fundraiser. In 2006, Mr. Castle starred as the character Peter in his Broadway debut.

Six months later, he is now once again a proverbial struggling artist along with his husband, Frank Galgano, in their home in West Orange, New Jersey.

“I know I’m in the same boat as pretty much everybody else, whether they’re performing artists or mail delivery people or [people] who work in restaurants,” Mr. Castle says. “But now I’m just wondering, wow, what kind of place for me is there in the world? I’ve been working as a professional musician since I was in high school, and I really have no other professional skills – yet for the first time I am totally willing to look into another line of work.”

Both Mr. Castle and Ms. Land have been among those who have found an outlet in performing on platforms like Zoom – a radically different kind of medium demanding different kinds of skills, they say.

“On a creative level, a lot of us started experimenting with what I call these ‘pandemic videos,’” says Ms. Land, who produced both a live video version of “Still Within the Sound of My Voice” as well as a Zoom-style version. Musicians in her show laid down tracks separately with individual videos and sent them to a producer, who then provided a combined version for her to provide the songs’ lyrics.

Mr. Castle and Mr. Galgano were also able to continue to work with a cruise line and work online with other actors and musicians to start planning a series of Broadway musical selections for cruises scheduled for late 2021.

The pandemic has also revealed the inherent dramatic irony in trying to fit an art form defined by live performance on Zoom.

“The very premise of our art form is the gathering together as community to share in a story told onstage, live,” says Joe Haj, artistic director at the Guthrie Theater in Minneapolis. “That’s what connects us to our 2,500-year-old Western drama past.”

Trained performers passed on a given culture’s oral traditions for centuries before written records and generated the kind of shared emotional experiences that served to bond communal ties necessary for survival, scholars say.

“Community building is at the heart of what we do,” says Hillary Hart, executive director of Theatre Under the Stars in Houston, which has postponed all of its live performances until at least May 2021.

“It is about that community building and that exchange of energy. It’s no accident that studies show people’s heart rates sync up inside a theater as they share that time together,” Ms. Hart says. “Even though we understand that there are social service needs, health care needs, making sure people have what they need in order to just literally survive, there is a role for the arts in that conversation. Especially in this day and time, we can be a place for healing.”

Cabaret night at the Paper Mill

Both Ms. Land and Mr. Castle experienced a measure of healing themselves when Paper Mill Playhouse, a local theater near their homes in New Jersey, asked them to perform at a socially-distanced cabaret night at a makeshift outdoor venue on the theater’s property.

“It’s a way to keep us present, offer something for our patrons, and also something to be able to employ some local artists and give them a modest paycheck,” says Michael Stotts, managing director of the Paper Mill. “But it’s only 80 or 90 seats, compared to our 1,200-seat main venue.”

Mr. Castle says he had fallen into a really bad funk before the venue reached out to him, but he was thrilled to have a chance to perform for the first time with Ms. Land, with whom he’s been friends for years.

“I said, ‘Yes, I’ll take any dates you’ve got,’” he says. “I don’t even care about the money at this point. It’s like, hey, I need to be singing and playing. I need to be seeing other people.”

Normally eight musicians play with Ms. Land during performances. At the Paper Mill, there can only be two or three performers on stage, so Mr. Castle has accompanied her on piano as they perform selections from her cabaret show.

“Collaborating with Matt at the Paper Mill, it forced me to reinvent it, and that’s been a real positive,” she says of her tribute show. “We’re all just kind of just trying to stay in the moment, because looking at the long haul – is just way too daunting.”

The same has been true for Mr. Castle, who has been struggling with the current uncertainty of his career.

“I’m just trying to practice gratitude, practice being in the present, and not worrying about the future,” he says. “And it’s still important to be generous with other people – I feel that’s the best any of us can do.”